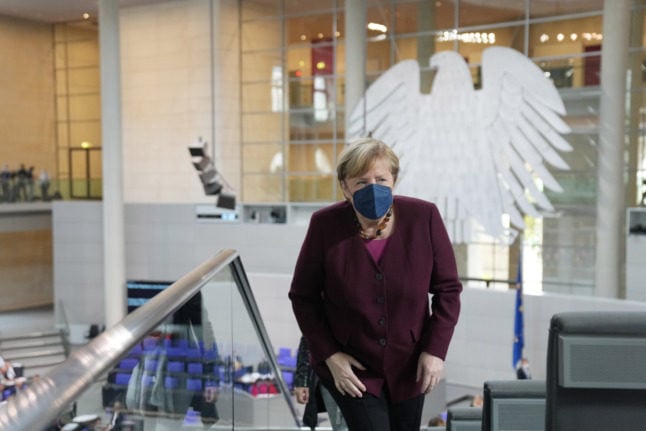 In office so long she was dubbed Germany’s “eternal chancellor”, Merkel, 67, leaves with her popularity so resilient she would likely have won a record fifth term had she sought it.

Instead, Merkel will pass the baton as the first German chancellor to step down entirely by choice, with a whole generation of voters never knowing another person at the top.

Her supporters say she provided steady leadership through countless global crises as a moderate and unifying figure.

Yet critics argue a muddle-through style pegged to the broadest possible consensus lacked the bold vision to prepare Europe and its top economy for the coming decades.

What is certain is that she leaves behind a fractured political landscape, with her own CDU party divided as it struggles to emerge from her long shadow.

READ ALSO: OPINION: Germany will have to endure Covid for a while longer, but at least Merkel is going

Social Democrat Olaf Scholz, who served as her vice chancellor and finance minister, successfully sold himself as the Merkel continuity candidate in the run-up to September’s general election and is now poised to succeed her.

Do the right thing

The unflappable Merkel has served for many in recent years as a multilateralist counterweight to the big, brash men of global politics, from Donald Trump to Vladimir Putin.

A Pew Research Center poll in September showed large majorities in most democracies around the globe having “confidence in Merkel to do the right thing in world affairs”. A trained quantum chemist raised behind the Iron Curtain, Merkel was long in sync with her change-averse electorate as a guarantor of stability.

Her major policy shifts reflected the wishes of large German majorities – among them phasing out nuclear power after the 2011 Fukushima disaster – and attracted a broad new coalition of women and urban voters to the once arch-conservative CDU.

However, the last days of her tenure have been marred by a vicious fourth wave of the coronavirus outbreak, the worst since the start of the pandemic.

Before the pandemic, her boldest move — keeping open German borders in 2015 to more than one million asylum seekers — seemed set to determine her legacy.

But while many Germans rallied to Merkel’s “We can do it” cry, the move also emboldened an anti-migrant party, Alternative for Germany (AfD), ushering a far-right bloc into parliament for the first time since World War II.

The woman once known as the “climate chancellor” for pushing renewables also faces a mass movement of young activists arguing she has failed to face up to the climate emergency, with Germany not even meeting its own emissions reduction commitments. The incoming coalition has pledged to improve on that legacy, and to take a more assertive stance with Russia and China after the commerce-based pragmatism of the Merkel years.

Angry protesters dubbed her Europe’s “austerity queen” and caricatured her in Nazi garb, while defenders credit her with holding the currency union together.

Merkel, the EU’s and G7’s most senior leader, started as a contemporary of George W. Bush, Tony Blair and Jacques Chirac when she became Germany’s youngest and first female chancellor in 2005.

She was born Angela Dorothea Kasner on July 17th, 1954 in the port city of Hamburg, the daughter of a Lutheran clergyman and a schoolteacher.

She excelled in mathematics and Russian, which has helped her maintain the dialogue with the other veteran on the world stage, Russia’s Putin, who was a KGB officer in Dresden when the Berlin Wall fell in 1989.

After the fall of the wall, Merkel, who was working in a chemistry lab, joined a pro-democracy group that would merge with Kohl’s Christian Democrats. The Protestant from the East whom Kohl nicknamed his “girl” would later be elected leader of a party until then dominated by western Catholic patriarchs.

As she rose to power, party rivals sneeringly called her “Mutti” (Mummy) behind her back but she deftly – some said ruthlessly – eliminated potential challengers.

Asked on her final trip to Washington in June what she looked forward to most, she replied “not having to constantly make decisions”.

Pointing to the more than 1.2 million refugees and asylum seekers welcomed by Germany in 2015 and 2016, at the height of migrant crisis sparked especially by the war in Syria, the UNHCR selection committee hailed Merkel’s “leadership, courage and compassion.”

At the time, the woman who lead the German government for 16 years said the situation “put our European values to the test as seldom before. It was no more and no less than a humanitarian imperative.”

“By helping more than a million refugees to survive and rebuild, Angela Merkel displayed great moral and political courage,” he said in a statement.

“It was true leadership, appealing to our common humanity, standing firm against those who preached fear and discrimination,” he said.

“She showed what can be achieved when politicians take the right course of action and work to find solutions to the world’s challenges rather than simply shift responsibility to others.”

The selection committee highlighted that in addition to protecting people forced to flee war, Merkel was the driving force behind Germany’s collective efforts to receive them and help them integrate into society.

The Nansen Award, awarded annually, was created in 1954 in honour of the first UN High Commissioner for Refugees, Norwegian Arctic explorer and  humanitarian Fridtjof Nansen, to mark outstanding work on behalf of refugees.

Merkel will receive her award and the $150,000 in prize money at a ceremony in Geneva on October 10th, where four regional winners will also be honoured.