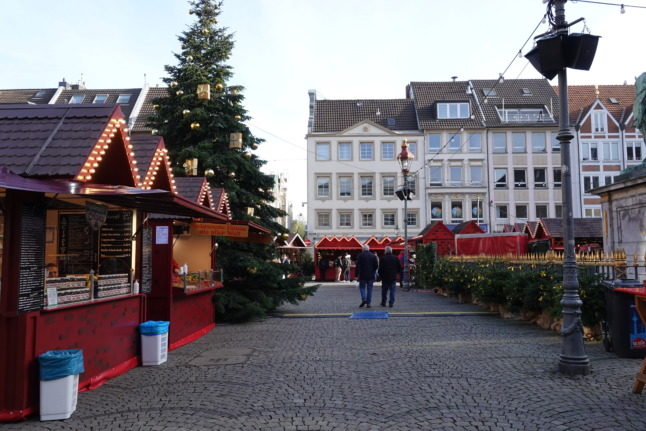 Two men walk through the Christmas market in Düsseldorf, which has opened under 2G rules. Photo: picture alliance/dpa | Mona Wenisch

In North Rhine-Westphalia, 2G rules have come into effect across the board. As of Wednesday, people must show either proof of vaccination or proof of recovery in order to enter public indoor venues like restaurants, bars, libraries and gyms or the indoor sections of Christmas markets.

To gain access to events or venues with a higher risk of infection – such as clubs or carnivals – the western German state has introduced a rule known as ‘2G plus’. Under this system, even vaccinated and recovered people must also present a current negative test before they are allowed to enter.

With European regulators expected to approve Covid vaccinations for children aged five to eleven later this week, North Rhine-Westphalia has also announced that it is making preparations to vaccinate children once Germany’s stock of lower-dosed vaccines are dispensed on December 20th.

In neighbouring Baden-Württemberg, 2G rules have also come into force, while vaccinated and recovered people will require an additional negative test at events and nightlife venues likes bars and clubs.

In addition, unvaccinated people in Covid hotspots will only be allowed to go outside at night with a valid reason and will no longer have access to most shops – though shopping for food at supermarkets and grocery stores is allowed.

The moves comes as states across Germany introduce tough curbs on people who haven’t yet been immunised against Covid. The eastern state of Saxony, which currently has the highest infection rates in the country, has recently gone into a partial lockdown with Christmas market cancellations, 2G entry rules and nighttime curfews for the unvaccinated.

Amid soaring infection rates along the Austrian border, Bavaria has also instigated a partial lockdown in which bars and clubs will be closed and Christmas markets will be cancelled.

In areas with 7-day incidences of more than 1,000 cases per 100,000 people, restaurants, hotels, sports and cultural venues will also be forced to shut their doors, while elsewhere restaurants will close at 10pm each evening.

In addition, the state has introduced the 2G rule everywhere except in retail, and 2G plus applies in many cultural and leisure facilities. Contact restrictions have also returned for the unvaccinated, with only up to five unjabbed people from a maximum of two households allowed to meet at one time. Meanwhile, Brandenburg – the state surrounding Berlin – has extended its 2G entry rules to the retail sector, with the exception of supermarkets and other shops for daily needs. Its famous Christmas markets in picturesque towns like Potsdam will be cancelled, while strict contact restrictions will be imposed on the unvaccinated.

Meanwhile, far-reaching 2G rules will apply in Rhineland-Palatinate, Lower Saxony, Schleswig-Holstein and Saxony-Anhalt, meaning unvaccinated people in these states will be shut out of most indoor public spaces.

As weekly Covid cases rise above 400 per 100,000 for the first time in Germany, sweeping changes are being introduced on a national as well as a state level.

From Wednesday, only employees who have been vaccinated, recovered or tested (3G) will have access to their workplace, while passengers on public transport will also be expected to follow the 3G rules.

Employers will also be obliged to offer employees the chance to work from home where possible, while employees will be obligated to take up the offer.

The amended Infection Protection Act, which provides for these new measures, is to be evaluated and, if necessary, tightened up as early as December 9th when the state and federal governments meet for a round table.

Though the meeting is just over two weeks away, Federal Health Minister Jens Spahn (CDU) has called for it to be brought forward as the country struggles to cope with surging deaths and hospitalisations.

“We will have to act earlier,” Spahn told the Rheinische Post on Wednesday. “After all, we see that in Saxony, Bavaria, Baden-Württemberg and Thuringia the situation is very serious. We will probably have to transfer patients on a large scale within Germany for the first time.”

Asked if he would rule out a partial lockdown, Spahn said, “You shouldn’t rule anything out in this situation, as bitter as it is.”