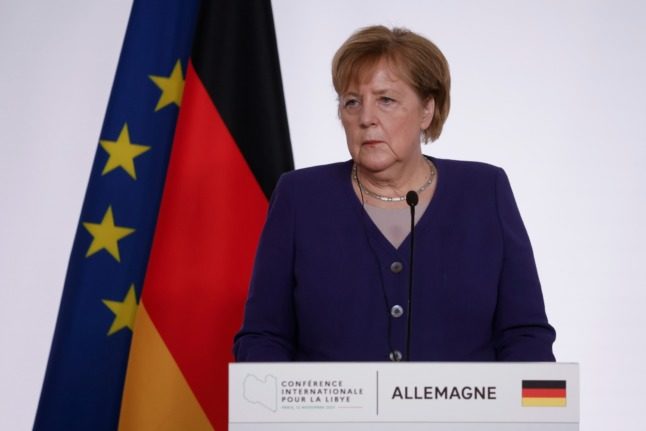 “The current pandemic situation in Germany is dramatic,” Merkel said in a video speech at the general meeting of the German Association of Cities. “The fourth wave is hitting our country with full force.

“The number of daily new infections is higher than ever before… and the daily death toll is also frightening,” she added.

The federal and state governments will meet on Thursday to discuss how to deal with the current Covid situation.

Germany has been seeing record numbers of daily Covid cases, with the country’s 7-day incidence rate reaching a new high for the 10th day in a row on Wednesday,

German states, including Bavaria and Berlin, have been bringing in tougher Covid measures – with unvaccinated people being excluded from many public places like restaurants and hotels.

The number of Covid-19 patients being admitted to hospitals is also going up.

Merkel said she wants Germany to decide on clear thresholds on Covid hospitalisations so politicians know when to put more measures in place “before it’s too late”.

Without this, the hospitalisation incidence, which reflects the situation in Germany’s hospitals, remains “a toothless tiger”, Merkel said.

The ultimate goal, Merkel said, is to “avoid overburdening the health system and therefore protect lives”.

This includes ensuring that Covid-19 patients – and all other patients – receive the best possible treatment, she said.

The “bitter truth” is that this is already no longer possible in the most severely affected districts, added Merkel, citing that treatments are already being postponed in eastern Bavaria, for example.

When the Infection Protection Act was amended in September, the hospitalisation incidence was made the decisive factor for assessing the pandemic situation.

Previously the number of weekly new Covid infections was the main indicator for the introduction of new measures.

However, unlike with the 7-day incidence of new infections, there is still no guideline on hospitalisations for the point at which politicians should take action.

Currently, the hospitalisation incidence is 4.9. This shows how many people were hospitalised with Covid-19 per 100,000 residents in the past seven days.

At its peak around Christmas last year, the hospitalisation incidence reached 15.5 per 100,000 people.

In her speech, Merkel also criticised the plans of the incoming coalition – the Social Democrats, Greens and the FDP – who want to maintain protective measures by amending the Infection Protection Act again, but let the so-called epidemic situation of national importance expire on November 25th.

Even if there is currently no majority in favour of extending this emergency, “there can be no doubt in my mind that we are in the midst of such an emergency,” Merkel said.

She said that the leaders of the federal and state governments have to send a clear signal on Thursday that everything must be done to slow down the spread of Covid.

At the meeting with the heads of state governments, Merkel also wants to talk about the progress of vaccinations. “It is not at all too late to decide on a first vaccination,” she said.

The outgoing Chancellor said that a “national effort” was needed for booster vaccinations so that people have easy access to top-up Covid vaccines. She said countries like Israel show that boosters can break Covid waves.