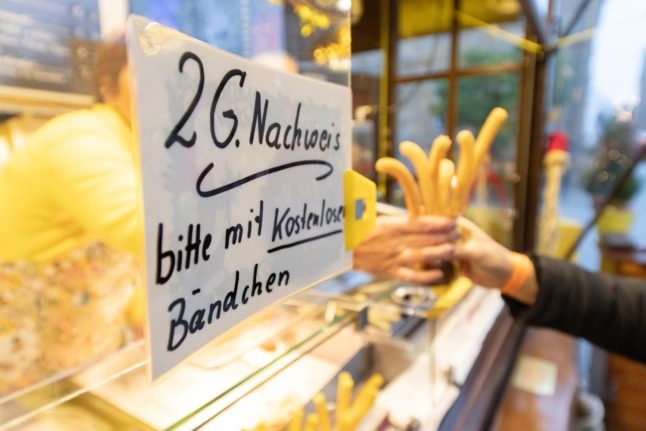 Visitors at the Osnabrück Christmas market have to prove they are vaccinated or have recovered from Covid under 2G rules. Photo: picture alliance/dpa | Friso Gentsch

On Tuesday, the weekly incidence rate of the virus hit another high one day after surpassing 300 out of every 100,000 people, the first time it had crossed the threshold, fuelled in part by sluggish vaccination rates.

In Bavaria, and the east German states of Thuringia and Saxony, the situation is reaching a critical point amid warnings that hospitals across the
country will hit capacity in the first two weeks of December.

The incoming government is recommending that people need to be vaccinated or prove a negative Covid test to use public transport and wants to re-impose working from home rules where there is no “compelling business reason”.

The prospective coalition partners will formally present their coronavirus proposals to the lower house of German parliament for approval on Thursday.

A crisis meeting between the government and the heads of Germany’s 16 regional states is also scheduled for Thursday, with the aim of better coordinating the country’s coronavirus response.

But the vacuum created by a government in transition has sown confusion. On Monday, a leading Green parliamentarian announced a vaccination requirement for health professionals, before being forced to row back.

The suggestion is still on the drawing board between her party, the Social Democrats and the liberal Free Democrats, who said Tuesday they plan to lay out a draft coalition contract next week.

READ ALSO: 2G rules – How Bavaria is tightening restrictions on the unvaccinated

Would-be chancellor Olaf Scholz from the centre-left Social Democrats, who has been accused of staying in the background as the Covid crisis rages, said it was “right to start a debate” about vaccine mandates for certain professions.

His vagueness drew immediate criticism from Der Spiegel weekly, which accused him of copying Merkel in staying on the fence until the last minute.

“Merkel herself couldn’t have said it better, or less precise,” it wrote.

The growing wave in a country which has recorded over five million infections during the pandemic is the first test for the incoming coalition before it has even put pen to paper on a deal.

“We have difficult weeks ahead of us,” outgoing Chancellor Angela Merkel said on Saturday.

“With the number of cases we have at the moment, hospitals across the country will reach capacity in the first two weeks of December,” Social Democrat health expert Karl Lauterbach said.

As such, access to public transport including “to school and taxis” will be limited to people who have been vaccinated, recovered or tested negative, according to a draft text seen by AFP.

States will also be able to introduce new restrictions in public and private places, potentially including Germany’s cherished Christmas markets.

The extra measures have been welcomed by Bavarian premier Markus Söder, who said they went in the “right direction”.

The incoming coalition parties have, however, ruled out a return to lockdown, deciding not to extend Germany’s official health emergency beyond
November 25th.

The decision has been criticised by conservatives, who are soon to find themselves in opposition for the first time in 16 years, and are already formulating attack-lines against the new coalition.

The reasons for the rapid deterioration in the situation are manifold, but they include a sluggish vaccination rate of 67.5 percent – significantly below the three-quarters mark targeted by Merkel’s government.

Around 14 million Germans eligible to be vaccinated have not taken up the offer. In Saxony, where the wave has so far been highest, only 59.6 percent of the population has received the jab.

Border regions like Bavaria and Saxony have suffered from growing case loads in the neighbouring Czech Republic and Austria, where Vienna this week put the unvaccinated under lockdown.

Germany’s former Communist east is also a bastion of support for the far-right AfD, vaccination sceptics. Half of all unvaccinated people voted for the party in the September general election, according to a poll by Forsa.