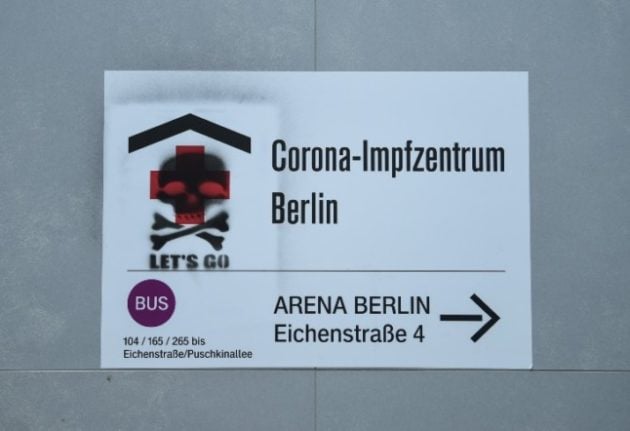 The Robert Koch Institute (RKI) has set a target of vaccinating 85 percent of Germans between the ages of 12 and 59 and 90 percent of those over that age.

According to official statistics though, this target is still some way off. Only 85 percent of those over the age of 60 are fully vaccinated, while under three quarters of adults below that age have had both doses of their vaccine. Out of the whole population, just over 67.2 percent are fully jabbed.

Germany is lagging behind France, where more than 80 percent of the eligible population (over 12s) is fully vaccinated, and well below that of Portugal, where close to 100 percent of adults over the age of 70 have ben inoculated.

Why are so many Germans reluctant to get make a date with their doctor for a Covid jab?

The Our World in Data chart shows the share of the whole population vaccinated against Covid in several European countries according to official stats.

What is the real vaccine quota?

The first thing that needs addressing here is that there is a lot of uncertainty over the actual number of people in Germany who have had their jabs.

The RKI, Germany’s national disease control office, has repeatedly said that the real vaccine quota could be up to five percent higher than the official one.

The reasons for this discrepancy aren’t totally clear, but a survey carried out by the RKI in August suggested a vaccine rate among adults closer to 90 percent.

The RKI believes that this number is too high, but suggests that a realistic vaccine quota among adults of around 84 percent.

Some people in Germany – especially among the foreign population – also got their shots abroad due to the initially slow vaccine rollout and these people also won’t be counted in the total.

Given these uncertainties, it is hard to tell whether Germany is a real laggard in western Europe in terms of its vaccine rate or whether it is slightly behind the average.

A history of hesitancy

Vaccine hesitancy is nothing new in Germany. Before the pandemic struck, there were increased reports of measles outbreaks at schools due to ever more parents declining to take their children in to get inoculated against once common child diseases.

Things got so serious that in 2019, Health Minister Jens Spahn even made the measles jab mandatory for children to try and quell the problem.

A survey by the French Hospital Grenoble in 2019 showed that German parents were more likely than European counterparts to reject mandatory vaccines against measles, mumps and other child diseases for which long-established vaccines exist.

The study also showed that only British parents were more likely than Germans to completely reject any vaccines for their children. It found that 2.6 percent of German parents totally rejected child vaccines.

The researchers concluded that German parents get too much information on vaccines from social media, where sceptics spread alarmism around the potential dangers.

Fear of long-term side effects

In the current crisis, fears have been heightened due to the fact that the most commonly used vaccine in Germany – the Pfizer/BioNTech vaccine – is based on mRNA technology, which before the pandemic had never been accredited for common use.

Several prominent personalities have raised doubts about mRNA technology, although their fears have been roundly rebuffed by the scientific community.

Richard David Precht, a popular philosopher, recently described the mRNA vaccines as “gene technology”, saying “for genetically engineered vaccines like this, we don’t have a single long-term efficacy study.”

Another famous figure who has said that she distrusts BioNTech’s vaccine is left-wing politician Sahra Wagenknecht.

The former Bundestag leader of Die Linke said on television recently that wouldn’t accept being inoculated with the mRNA vaccine due to the fact that she didn’t see herself as being at risk of suffering serious symptoms from infection with the virus.

Precht and Wagenknecht have both argued that anyone can pass on the virus, vaccinated or not, and it should therefore be left up to the individual to choose what is best for them.

Precht lamented that “people are being pilloried in our society because they have come to a different conclusion to the one the government wants.”

Vaccine experts have dismissed concerns around the mRNA technology, saying that any side effects of vaccines would already be apparent within weeks of the dose being administered.

Others who have publicly confirmed that they haven’t been vaccinated are Bayern Munich footballer Joshua Kimmich and Bavarian high profile politician Hubert Aiwanger.

Who are the vaccine sceptics?

Data collected by the German government shows that the four states with the lowest vaccine take up are all in the east of the country.

The lowest rate is in Saxony, where the state government this week introduced bans on unvaccinated people using indoor areas of restaurants, bars or cultural venues in an effort to push vaccine take up.

Saxonian locals told AFP on Tuesday that they still won’t get the jab, citing fears over the way the vaccines came onto the market. One person described Covid-19 is being “like a bad flu” and therefore not worth getting vaccinated for. Another said that vaccine “was developed in such a short space of time”.

Christian Endt, a data journalist at Die Zeit newspaper recently slammed the fact that there is not enough hard data on just who is not getting jabbed, making it harder to develop targeted strategies.

The most detailed work on the reasons behind people not getting vaccinated has been done by Dr. Cornelia Betsch at Erfurt University.

Betsch’s most recent survey concluded that only a small fraction of those who have not yet been vaccinated are willing to do so. This finding was also backed up by a recent Forsa poll among the unvaccinated, where 65 respondents said there was “no way” they’d get a jab.

A closer look at the motivations found that people are most likely to say that they had weighed up the pros and cons of getting a vaccine and had decided against it.

Unsurprisingly perhaps, only a minority of respondents said that they trusted that the vaccines are safe.

Many respondents also said that they did not see the need to get a vaccine if everyone else gets one – a phenomenon described by Betsch as ‘freeloading’.

At the same time, the survey found a higher affinity for conspiracy theories among unvaccinated people than those who’ve been inoculated, suggesting that their list of pros and cons might not be one that most scientists would put on their list.

‘Linked to trust in government’

Reimut Zohlnhöfer, a political scientist at Heidelberg University, believes that vaccine hesitancy has less to do with the vaccines themselves and more to do with a general trust, or lack thereof, in government and public institutions.

After he and his colleagues interviewed 1,300 people on the topic of vaccines between July and December of last year, Zohlnhöfer concluded that people’s “willingness to get vaccinated depends to some extent on the social climate in general”.

Factors such as perceptions of how well the government is dealing with the pandemic, how trustworthy the scientific community is, and the transparency of media reporting, affect how willing people were to get vaccinated, he told Deutschlandfunk radio.

“We found a slight correlation with voting for the (far-right party) AfD. It seems that AfD voters seem to be less willing to get vaccinated,” he said.