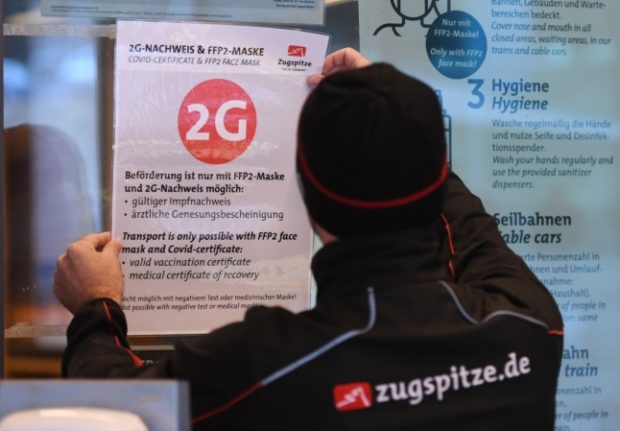 A Zugspitzbahn employee sticks a 2G notice up at the entrance to a cable car lift in Grainau, Bavaria. Photo: picture alliance/dpa | Angelika Warmuth

The nationwide 7-day incidence across Germany reached a record high on Monday. It soared to 201.1 Covid infections per 100,000 people within seven days – surpassing the last high of 197.6 reached on December 22nd, 2020.

And in some German states the incidence is even higher. In Saxony, the 7-day incidence reached 491.3 infections per 100,000 residents, making it the current Covid hotspot in Germany.

What are the changes to Covid restrictions?

Saxony significantly tightened Covid measures – and they are mostly aimed at people eligible for vaccination who choose not to get their shots.

From Monday onwards, only vaccinated people – or those who’ve recovered from Covid-19 in the last six months – have access to many areas of public life in the eastern state. These include indoor restaurants, cultural and leisure facilities and football stadiums. This is the so-called 2G rule, which stands for geimpft (vaccinated) and genesen (recovered).

Unlike the 3G rules, which include access to unvaccinated people with a test (getestet) people who are unvaccinated are generally excluded.

States are pushing restrictions towards unvaccinated people because infection rates are higher in this group, and they are more likely to suffer a severe course of Covid-19 if they become infected. On Sunday Saxon state figures showed that the 7-day incidence among the vaccinated was 80 cases per 100,000 people, while it was almost 900 among the unvaccinated.

Incidence rate for unvaccinated in Saxony is almost 900 compared to 80 in fully vaccinated.

The new rules are the toughest state-wide restrictions in Germany against non-inoculated people. Only children as well as those who cannot receive jabs for medical reasons are exempt.

The state is also ordering compulsory FFP2 masks on public transport. The federal requirement is for people to wear medical masks.

Tougher Covid rules have been in force in Bavaria since Sunday due to the high number of occupied intensive care beds.

The south-eastern state also has a lower than average vaccination rate, with 65 percent of the population fully jabbed.

In the southern state, only vaccinated people, those who’ve recovered from Covid and people with a negative PCR test are now allowed to enter some parts of public life, such as indoor events (so-called 3G plus rule)  In the past, unvaccinated people could show a rapid antigen test rather than the more expensive PCR test.

FFP2 masks have to be worn again by everyone in certain public areas such as on transport. In regions where the number of new infections and intensive care patients is higher, even stricter rules apply.

Bavaria will implement 2G rules when there are more than 600 Covid-19 patients in intensive care for two days in a row. On Monday, there were 604 Covid patients in ICU. If the number remains at this level, Bavaria will order tougher measures on the third day.

Meanwhile, Baden-Württemberg is preparing to declare the highest risk level of their ‘Covid warning system’, which would see restrictions tightened.

However, the ministry of social affairs said Sunday it expects the highest alert level to be declared soon.

As of Sunday, 323 patients with Covid-19 were being treated in intensive care units (ICU) in the state. If the number of patients rises above 390 over two days, new restrictions will apply.

The state would move to a 2G system – excluding the unvaccinated from many public places like museums, indoor dining and bars.

Around 65.2 percent of Baden-Württemberg is fully vaccinated against Covid-19.

Will 2G be the norm?

Many states in Germany, including Berlin and Hamburg, already offer businesses the option of enforcing the 2G rule. But there are calls for a Germany-wide 2G system that would see the unvaccinated excluded from public life.

Some states are against this move, though.

Schleswig-Holstein, for instance, continues to back 3G rules.

READ MORE: Calls grow for Germany to bring in national restrictions for unvaccinated