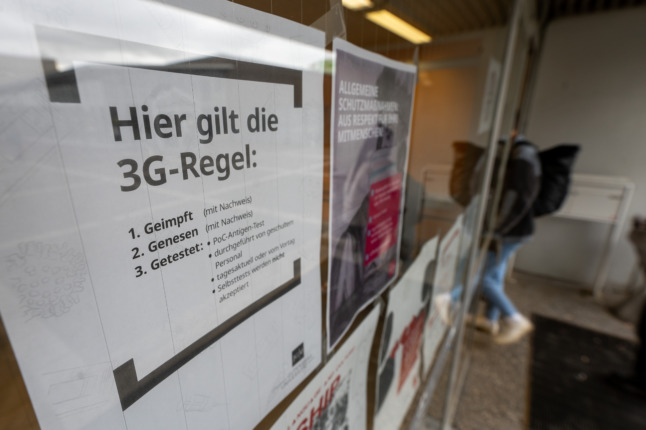 “Politicians are in danger of making the same mistake they made last autumn, when they shied away from consistent and centrally effective measures,” Siegfried Russwurm, the president of the Federation of German Industry (BDI), told DPA on Tuesday.

Along with the Association of Small and Medium-Sized Business (BVMW) and the German Employers’ Association (BDA), the BDI is pushing for businesses to gain the right to introduce the ‘3G’ rule in the workplace, meaning employees would have to be vaccinated (geimpft), recovered (genesen) or able to supply a negative test (getestet) in order to attend work as usual.

“The federal and state governments must quickly work together to create a clear federal legal basis so that companies can apply 3G-based protective measures in a comprehensible and planned way for their employees in the coming weeks,” Russwurm said.

“This will allow workflows to return to normal as much as possible, free employees from burdensome hygiene requirements, and allow creative collaboration to return without restriction.”

Rainer Dulger, president of the Confederation of German Employers’ Associations, echoed Russwurm’s comments, adding that businesses should also be able to introduce the more restrictive 2G rule, which would only allowed vaccinated and recovered people entry to the workplace.

“Whether 2G or 3G, which regulations are practicable for companies must be decided by each company for itself,” he told DPA. “As is so often the case, the most practical solution applies: local companies are best placed to know what makes sense for their employees and the company.”

On Monday, a handful of German companies announced they would be piloting 2G canteens in their workplaces to allow people with Covid immunity to enjoy a normal dining environment once again.

As well as the right to implement 2G or 3G systems in their offices, business leaders also want to create new regulations that would allow them to ask for their employees’ vaccination status.

“It is crucial that business processes in companies suffering from the consequences of the pandemic and lockdown are not disrupted or even come to a standstill,” Jerger said.

He also urged employees to get vaccinated or tested regularly in light of spiking infection rates. “Another lockdown, even on a regional level, could spell the end for the businesses affected,” he added. Siegfried Russwurm, president of the German Federation of Industry, says businesses should be given the power to introduce 3G in the workplace. Photo: picture alliance/dpa/dpa-Zentralbild | Britta Pedersen

BDA’s Duglar called on the states to participate in an urgent vaccination summit in which employers’ right to request health information about employees could be laid down in law. “Anyone who hesitates in this regard risks limiting crucial health protection measures in our companies,” he said.

So far, only employees in daycare centers, schools and nursing homes can be asked by employers whether they have been vaccinated. For several weeks, businesses have been calling on the government to extend this rule across all industries and sectors.

The ‘epidemic situation of national scope’, a clause that has formed the legal basis for Covid regulations such as mandatory masks and testing in the workplace, is due to expire on November 25th – and the likely next government is keen to let the regulation lapse.

Although there are plans to extend other pandemic legislation to allow for continued protections, many business leaders are concerned that they will be left with fewer options and a less consistent legal framework once the emergency powers expire.

“Instead of breaking the wave with cross-state control and consistent containment concepts, we are again threatened with an inefficient patchwork of inconsistent state measures,” Russwurm said.

According to the IG Metall trade union, the Covid Occupational Health and Safety Ordinance is linked to the epidemic situation of national scope. If it is not extended, regulations to protect employees in the workplace would also be dropped, which could lead to a wave of outbreaks in offices and factories.

Russwurm said that politicians must do everything in their power to ensure that vaccination numbers continue to rise and that booster vaccinations are systematically carried out over the coming months.

“We cannot have a small group of vaccination refusers crippling an entire society in the coming months,” he said. “It is high time to consider mandatory vaccination for all professionals with regular contact with vulnerable groups in nursing homes, schools and daycare centers.”