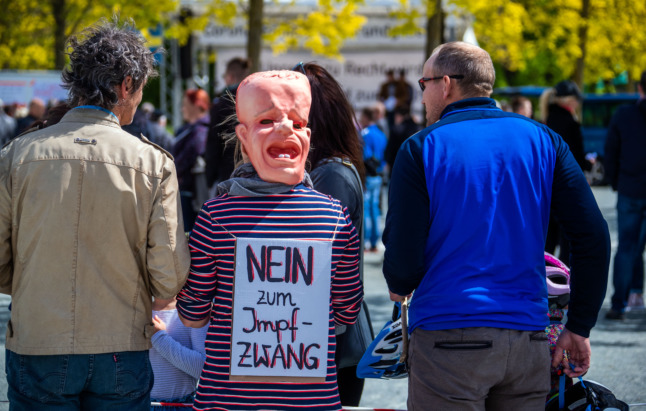 Anti-vax protesters gather at a demo in Schwerin, Mecklenburg Western-Pomerania, with a sign saying "No to forced vaccination." Photo: picture alliance/dpa/dpa-Zentralbild | Jens Büttner

According to a recent survey carried out by Forsa on behalf of the Ministry for Health, around two thirds of people (65 percent) said there was “no way” they would get a Covid jab in the next two months.

Just 10 percent of the 3,000 respondents said they would “probably” get vaccinated in the coming months or remained undecided.

The news comes amid spiralling infection rates and a steep rise in the number of patients in intensive care units in Germany – most of whom are unvaccinated.

The president of the World Medical Association, Frank Ulrich Montgomery, told the Augsburger Allgemeine on Thursday that unvaccinated people were risking their own lives, and those of others, and urged people to get the jabs.

The poll makes for disheartening reading for government ministers who have been struggling to convince the undecided to get their jabs to avoid a difficult autumn and winter.

In a press conference alongside the Robert Koch Institute’s Lothar Wieler and Health Minister Jens Spahn (CDU), Thomas Mertens from the Standing Vaccinations Committee (STIKO) said he believed that vast majority of unvaccinated people were “not hardliners” but simply on the fence.

However, the results of the survey, which was conducted in late September and early October, suggest that people with doubts about vaccinations are generally more set in their ways than previously assumed.

For example, 89 percent of the respondents had said that it would have no influence on their own willingness to be vaccinated if the intensive care units once again reached their capacity limits. Just five percent revealed that they would be more like to get a Covid jab if hospitals were overwhelmed with patients. A nurse puts on protective clothing ahead of a shift on the intensive care unit at the University of Essen hospital. Rising numbers of Covid patients in intensive care has little impact on the decisions of unvaccinated people in Germany, according to the survey. Photo: picture alliance/dpa | Fabian Strauch

Furthermore, it appears that any moves to reward vaccination or restrict the rights of the unvaccinated generally makes people less likely to go and jet their jabs.

In fact, 27 percent of people said the introduction of ‘2G’ rules (i.e. entry policies allowing only vaccinated and recovered people in public places) would have a negative effect on their decision to get the jabs, while just five percent said it would have a positive impact.

Meanwhile, 22 percent of people said they were less likely to get vaccinated after the introduction of paid-for tests, while just three percent said they were more likely to.

Even if politicians pledged to lift all Covid restrictions would be lifted once a certain vaccination quota had been reached, 86 percent of the unvaccinated said it wouldn’t affect their decision to steer clear of the vaccine.

For the vast majority of people, external influences like government policy had no impact on their vaccination decision whatsoever.

While the majority seem determined to avoid Covid vaccinations at costs, the respondents of the survey gave a range of different reasons for doing so.

Many of the unvaccinated had concerns about safety in mind when turning down the vaccine: a large majority considered them to be insufficiently tested (74 percent) and feared vaccine damage and long-term consequences (62 percent).

In addition, there is scepticism about the effectiveness of the vaccines: almost two-thirds (63 percent) of respondents stressed that even vaccinated people can become infected with Covid and can also infect others.

Lack of time or opportunity for vaccination was cited as a reason by only one percent.

According to official government statistics, 55.3 million people are fully vaccinated in Germany, equating to 66.5 percent of the population.

However, the Robert Koch Institute recently revealed that a large number of vaccinations may not have been reported – particularly when it comes to jabs carried out by GPs. According to the RKI, the real figure may be up to five percent higher.