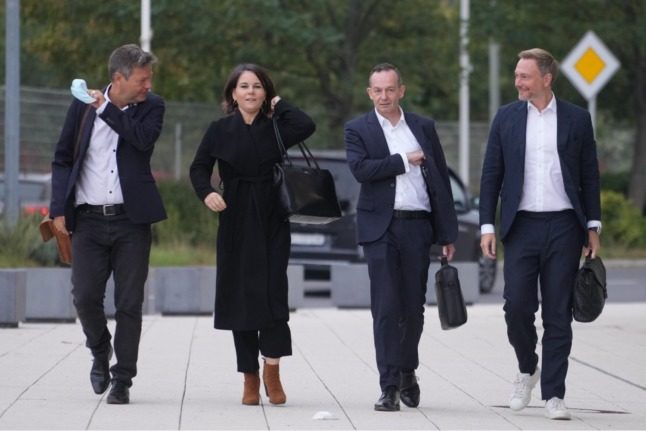 So it’s official: the centre-left Social Democrats (SPD), Greens, and pro-business Free Democrats (FDP) are an item. Negotiations towards forming a new German government with the Ampelkoaltion (named traffic-light coalition after their party colours) can begin. If you think this doesn’t quite sound like a picture-perfect political love-story, you’re right: it’s a not-uncomplicated start to what is by no means a marriage made in heaven.

Yet, in the immediate aftermath of the election just a few weeks ago, few thought it likely that the three parties would even get as far as these pre-nuptials – and certainly not so quickly. Now, the parties look set to be at the altar as soon as Christmas.

You might also be thinking that “so quickly” is the wrong choice of words here, especially if you’re used to UK or US politics. This is, however, nothing more than the smooth functioning of proportional representation in a post-industrial society: it is easier to form governments when a UK-style first-past-the-post system weights in favour of two major parties; and it used to be easier to form governments in Germany when Germans, by and large, voted socialist in industrial heartlands and conservative everywhere else.

Now that the German electorate has finally discovered the full bandwidth of its ballot-box options, returning the two historical parties of government at around 25 percent and four smaller parties at 5 to 15 percent, coalitions need to have three participants to get a majority – and a menage à trois is never an easy thing to pull off.

Anyone who thinks this means Germany is now suffering from severe political instability, however, should take a look west to Belgium, which regularly breaks records for numbers of days without a government (535 in 2010/2011 and, depending on how you count, 652 in 2018-2020), or indeed further west to the UK or the US, both of which are perceived as having ‘less complicated’ government formations. Yet these are viewed from Germany as nothing short of basket cases: currently, the UK government is unable to ensure the supply of basic goods and the US administration, for the umpteenth time in recent years, almost went bankrupt two weeks back.

Of course, even these flattering comparisons don’t give Germany’s parties carte blanche to mess about for months on end without actually getting down to business: they tried that in 2017 – and it didn’t go down well. After the waffling “Jamaica Coalition” talks between CDU/CSU, Greens, and FDP broke down, yet another ‘Grand Coalition’ with the conservatives and SPD was sworn in after 171 days.

This left an electorate which had voted for change frustrated, and the SPD on life-support; the FDP, too – which had come out of things looking like a highly-strung diva – had a near-death experience in the polls. It’s nothing short of a miracle, actually, that both parties are now alive and well and about to be part of the next government – and they know it. Indeed, 2017 goes some way to explaining why the three parties are, less than a month after the election and despite the clear policy differences, already getting down to the nitty-gritty.

READ ALSO: 10 German words you need to know to keep up with coalition talks

Why are things going so smoothly in Germany?

In the weeks after the election a few things happened which I – and others – did not see coming. Firstly, after coming out all guns blazing on election night, CDU Leader Armin Laschet was eventually forced, both by public pressure and by many in his own party, to back down and admit defeat. Given the Union’s previously shameless attitude to staying in government despite mounting electoral losses – Helmut Kohl campaigned for a fifth(!) term in 1998, Angela Merkel proved immune to criticism in 2017 – the sheer speed with which the centre-right CDU/CSU moved through the phases of grief into depression/acceptance was surprising.

On the face of it, this CDU/CSU implosion left the FDP with what I called “the unenviable task of having to explain to its primarily right-of-centre supporters why helping an SPD Chancellor and lots of lefty Greens into power is what they voted for”. In reality, though – second surprise – it freed FDP leader Christian Lindner up: as they watched their preferred Union bedfellows disintegrate, FDP supporters shifted their support to safe-pair-of-hands SPD chancellor candidate Olaf Scholz.

ANALYSIS: Who were the real winners and losers of Germany’s election?

Lindner, of course, is the real winner – and has the skill to play the fresh hand he has been dealt. His deft pivot can best be observed in his use of the word Fantasie, or “imagination”. Prior to the election, he repeatedly claimed that a traffic-light tie-up was “beyond his imagination”(Mir fehlt die Fantasie). On Friday he declared – with a wink to future historians – that the preliminary talks had indeed broadened his political imagination.

For all Lindner is the key figure here, however, it would be wrong to neglect the third surprising post-election development: turns out, SPD, Green, and FDP negotiators get along like a house on fire! And when you observe them, you can see why. Anyone who listens, for instance, hears: nothing. Or at least nothing they shouldn’t. That’s because the three parties have built up trust by agreeing confidentiality – and then actually sticking to it.

When you watch the traffic-light negotiator team, you suddenly realise how young they are (and yes, in German politics, the 30-50 age bracket does count as “young”). The only visible grey hairs are to be found in Lindner’s beard (Olaf Scholz rarely takes part at this stage and is bald anyway), and besides plenty of social media smarts, they are united by a quite different approach to negotiations. Whereas Merkel and the baby-boomers’ preferred modus operandi was to lock everyone in a room from early evening onwards and see who cracked first in the small hours, Robert Habeck et al make a point of starting talks at 10am and trying to avoid essay-crisis-style all-nighters.

And so, while the romance of a political love-story is nowhere to be seen – no Downing Street rose gardens, no Berlin balconies late at night – this three-way marriage is looking like an unexpectedly stable prospect.

Negotiations are certainly going to be complex – with national debt rocketing, there’s no dowry to speak of, yet two of the parties want to take out a very large mortgage with a penny-pinching third party – but away from economics, the parties have lots of common ground, e.g. vis-à-vis immigration, cannabis liberalisation. And how does that old adage go? “Marry in haste, repent at leisure?” There’s no haste here – and no dawdling either. All in all, it’s a pleasant surprise.