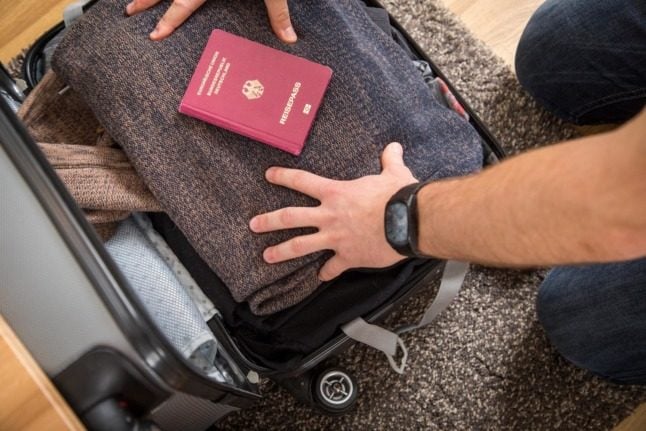 A holidaymaker with a German passport - one of the most powerful passports in the world. Photo: picture alliance/dpa/dpa-tmn | Christin Klose

Many of us foreigners in Germany can only dream of becoming German due to the current strict dual citizenship laws, although that could change in future under a new German government.

For those who’ve already managed to get their hands on a German passport, either because they were born here or were naturalised, then congratulations – you have one of the most powerful passports in the world.

With this exciting Reisepass, Germans can travel visa-free to 190 countries around the world. The purple-coloured passport is the second ‘most powerful in the world’, according to a index by the London law firm Henley & Partners.

The most powerful passports in the world belong to citizens of Japan and Singapore, who can visit 192 countries worldwide without a visa, as the graph by Statista shows.

There are big differences in the number of countries that can be visited visa-free or with a visa-on-arrival.

Citizens of Finland, Italy, Luxembourg and Spain can visit 189 countries visa-free with their passports.

Holders of a UK and US passport can head off to 185 countries without having to figure out visa paperwork. Australians can visit 184 countries visa-free.

Austrian and Danish citizens are allowed to travel to 188 countries without an explicit entry permit, and the Swiss passport opens the doors easily to 186 countries worldwide.

Syria, Iraq and Afghanistan have the weakest passports in terms of areas citizens can travel to without an entry permit – they have visa-free access to less than 30 countries worldwide.

The law firm Henley & Partners evaluates data from the International Air Transport Association (IATA), among other factors, and provides travellers with information on which countries they can travel to with their passports and whether a visa is required.

Each passport is scored on the total number of destinations that the holder can access visa-free. For each travel destination, if no visa is required, then a score of 1 is given to that passport. This also applies if passport holders can obtain a visa on arrival, a visitor’s permit, or an electronic travel authority (ETA) upon entry.

For countries that require a visa or where a passport holder has to apply for a government-approved electronic visa (e-Visa) before departure, a score of zero is given. The same applies if they need pre-departure approval for a visa on arrival.

The country ranking, however, does not take into account the current travel restrictions resulting from the coronavirus pandemic of which there are many.

For instance German passport holders – and other EU citizens – are not currently allowed to travel to the US unless they have an essential reason or they are also US citizens.

However, US president Joe Biden announced recently that the US will let vaccinated Europeans enter the country from November.