Buoyant from its best election result in 10 years, Germany's liberal FDP party looks set to play a outsized role in coalition negotiations to form the next government.

The centre-left Social Democrats (SPD) scored a narrow victory in Sunday’s election, according to preliminary results, emerging as the biggest party on 25.7 percent.

But after a fragmented vote, the SPD and their chancellor candidate Olaf Scholz will likely need the support of two other parties to secure a governing majority.

To complicate things, the CDU-CSU conservative alliance of outgoing Chancellor Angela Merkel has also signalled it will try to form a coalition even though it came in second.

Enter the FDP and their confident young leader Christian Lindner, 42, a charismatic speaker and stylish dresser who is regularly voted Germany’s sexiest politician.

Both Scholz and the CDU-CSU’s Armin Laschet are now wooing Lindner, who in turn has signaled a preference for a partnership with the conservatives even if he was keeping his options open.

Separately, the SPD’s Scholz has also declared that his preferred option would be to team up with the Greens, who scored 14.8 percent in the election, and the FDP, which won 11.5 percent.

Voting stats that emerged after the election revealed that first-time voters – of which there were 2.8 million this year – overwhelmingly voted for the FDP or the Greens, buoying up Lindner’s narrative that his party represents ‘future generations’ and an end to the status quo.

That is quite impressive for the FDP! Looks like they won most vote among first time voters – before the Greens, allegedly the party of the young. https://t.co/ikxJhk6s5C

In the televised post-election discussions, Lindner repeatedly drew parallels between his party and the Greens.

“Democratic parties should never rule out talking,” he said, suggesting that the FDP could sit down with the Greens first before talking with the two bigger parties.

Lindner admitted the Greens had touched on something with their focus on climate change and said he believed there were “a great many people in our country who would like to see a much bigger ecological sensitivity in politics”.

But the FDP is not a natural bedfellow with the SPD or the Greens, meaning coalition negotiations could prove tricky.

The FDP wants to avoid tax increases and preserve Germany’s cherished debt brake, while the SPD and the Greens want to raise the minimum wage, increase taxes for the wealthy and and invest public money in tackling climate change.

The chart below gives some indication of how difficult the talks may be, representing how each of the major parties’ pledges of wages, taxes and other social spending could influence the national budget. 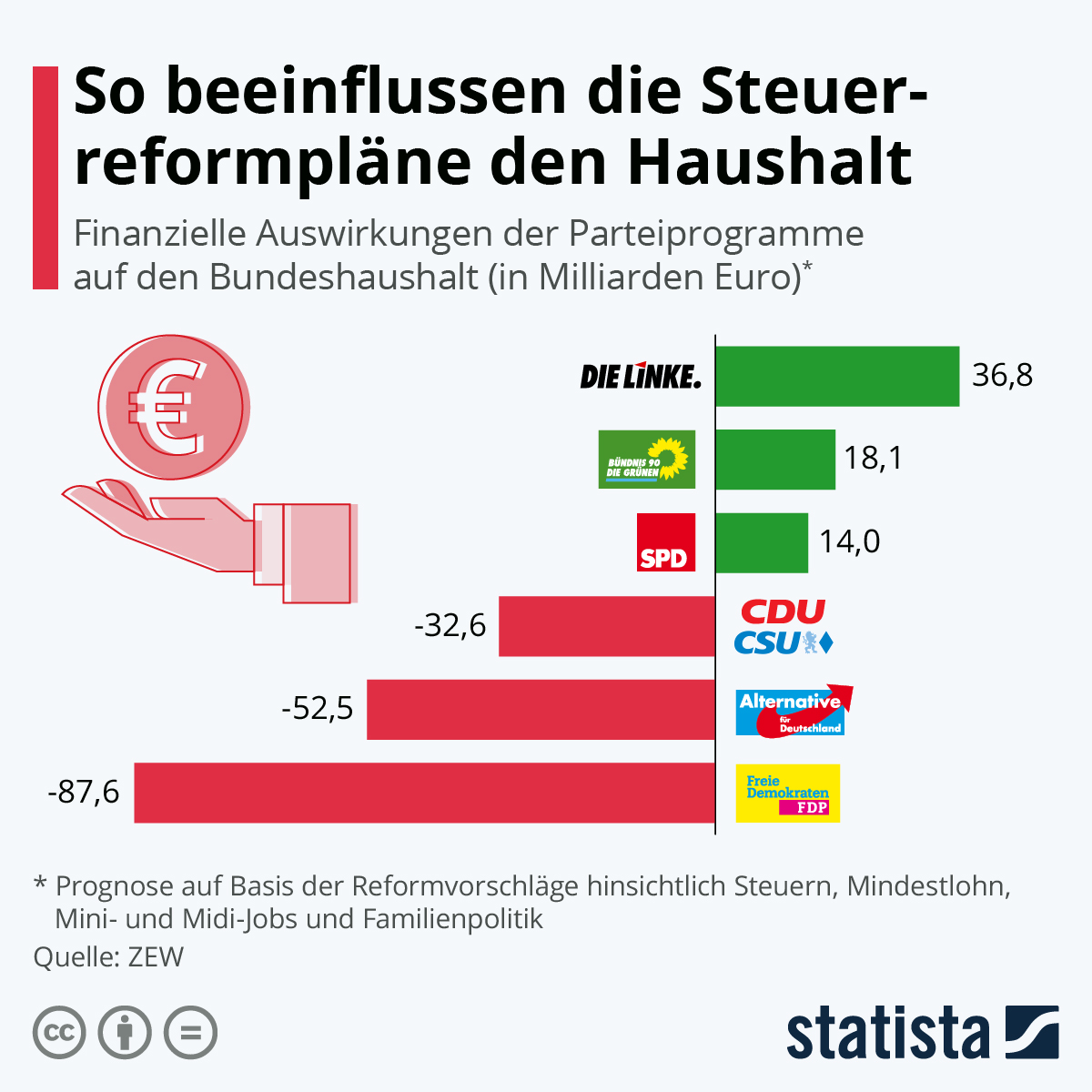 How the parties’ tax reform plans will influence the federal budget (in billions). Source: Statista

“The coalition issue is extremely difficult for the FDP. Its members do not want the FDP to be propping up a left-wing government,” said political scientist Oskar Niedermeyer of the Free University of Berlin.

The animosity is mutual from the SPD, with one party official recently describing Lindner as an “airhead”.

Appearing on ARD’s Tagesthemen on Monday night, however, Scholz struck a confident line about the potential for a so-called ‘Traffic Light’ coalition between the Greens, SPD and FDP.

“With enough pragmatism and a great willingness to cooperate, this will succeed,” he said, adding that he expected there to be good talks between the parties.

Explaining how they could find common group in their divergent policies, Scholz said the SPD, Greens and FDP are united by “a common idea of progress” that distinguishes them from other forces in German politics.

“We have a concrete idea of the modernisation of our society in the ’20s,” he explained.

This is not the first time the FDP has found itself in the position of being the potential “kingmaker” propping up a bigger party to form a government.

The party has been a junior coalition partner to both the CDU-CSU and the SPD in the past, scoring its best election result of 14.6 percent in 2009 when it went into government under Angela Merkel.

After Germany’s last election in 2017, the CDU-CSU initially tried to form a coalition with the Greens and the FDP – known as a “Jamaica” coalition because the parties’ colours match that country’s flag.

But the FDP dramatically walked out of negotiations over disagreements on migration and energy policy, with Lindner declaring it was “better not to govern at all than to govern badly”.

The decision plunged Germany into an unprecedented political crisis, delaying the formation of a government for several months. Lindner speaks at a general debate in parliament in 2020 as Chancellor Merkel looks on. Photo: picture alliance/dpa | Kay Nietfeld

Four years later, the FDP has been growing in confidence in opposition, gaining visibility with its vocal opposition to the government’s pandemic restrictions.

The FDP has “clearly positioned itself as a party that cares about civil liberties, but without joining the anti-mask movement,” said political scientist Niedermeyer.

Lindner, who joined the FDP aged 16 and became its leader at 34, has made no secret of his next ambition: to become finance minister in a coalition government.

READ ALSO: EXPLAINED: Who will be in Germany’s next coalition government?

With the liberals “looking very keen to go into government” according to Paul Maurice, a member of the Franco-German Studies Committee at the French Institute of International Relations, his wish might just come true.