EXPLAINED: Who will be in Germany's next coalition government?

After the centre-left Social Democrats edged victory in the German federal elections, furious coalition talks are getting underway. Here's what you need to know about Germany's three possible coalition governments.

What exactly is going on in Germany?

Unlike the United Kingdom or United States of America where the winner takes all, Germany's elections are far from over after the vote takes place.

Due to its proportional voting system, the largest party must secure 50 percent or more of the vote to govern by itself. Since parties rarely managed to achieve this feat, they're generally forced to gather round the negotiation table to try and thrash out coalition agreements with those who can help them secure a majority.

This is precisely the case after Sunday's nail-biting elections. After exit polls put the two big parties neck-and-neck in the early evening, the SPD finally squeaked through as the largest party on 25.7 percent of the vote to the CDU/CSU's 24.1 percent.

Now, both are claiming their right to govern.

Speaking to his supporters as the vote count rolled in, Olaf Scholz declared that people had voted "a change in the government", adding that he had a clear mandate to become the next Chancellor. Meanwhile, a bruised Armin Laschet told his battle-weary troops that CDU and its Bavarian sister party, the CSU, "will do everything we can to form a German government".

As Tagesschau described it, this is an election "with two possible chancellors and two kingmakers". What matters now is how those two potential chancellors - either the SPD's Olaf Scholz or CDU's Armin Laschet - approach the coming weeks as they enter coalition agreements. In many ways, it all depends how much they are willing to compromise.

The SPD may be buoyed by success as they enter this game of poker with the other parties - but the truth is, they could still come out empty handed.

Here are the three possible scenarios to look out for.

Named after the red (SPD), yellow (FDP) and green colours of its constituent parties, a 'traffic light' coalition - or Ampel in German - is one possible option for a future government.

And now it’s official: Olaf Scholz has just announced his intention to form a “social, environmental, liberal” traffic-light coalition with the Greens and FDP. https://t.co/kcZqcMD7ml

After the final vote count, the Social Democrats had secured 206 seats of a possible 735 in parliament. If you add the Greens' 118 seats and the liberal FDP's 92 seats, an SPD-led coalition of this sort would have a total of 416 seats - enough to form a very comfortable majority.

So, what's the problem? Well, put bluntly: the FDP.

Ahead of the September 26th elections, both the Greens' Annalena Baerbock and the SPD's Olaf Scholz made no secret of the fact that they would ideally like to go into a coalition with one another - and the message hasn't changed.

Speaking to ARD's Morning Magazine on Monday, Michael Kellner, the Greens' executive director, emphasised the amount of overlap the party had with the SPD. They agree on policies like easing the tax burden on lower and middle-income earners while taxing higher earners more, introducing a €12 minimum wage, investing heavily in eco-friendly infrastructure, and switching to a more inclusive health insurance model. The Greens and SPD have been flirting over a potential coalition for some time. Could the FDP derail their dreams? Photo: picture alliance/dpa | Kay Nietfeld

The FDP is on board with none of those things - preferring market innovation to state intervention.

In fact, the liberals' leader, Christian Lindner, has been saying throughout the election that he "can't imagine" what kind of offer the SPD could make his party that wouldn't also alienate those on the left within the Social Democrats. After the initial election results were in, he reiterated his preference for a CDU-led coalition so many times his aides may have been tempted to press the 'reset' button.

However, the situation isn't entirely hopeless: all three Ampel parties agree on a more permissive approach to immigration, including allowing dual citizenship in one way or another. Experienced negotiator Scholz is known for taking the centre line. And Lindner said on Sunday night that he wouldn't be ruling out talks with the SPD and Greens on a potential coalition agreement, though he's keen to bend the ear of the Greens before talking to either of the major parties.

One thing's clear, however: any 'traffic light' would have to show a green light to enough of the FDP's liberal economic and low-tax policies for this type of government to work. If the state of Rhineland-Palatinate, where there's also a traffic-light coalition, is anything to go by, it could see each of the parties playing to its strengths, with the FDP taking the reigns of the country's finances or business sector while the Greens take charge of the environmental ministry.

According to a survey of political analysts ahead of the election, a 'Jamaica' coalition that combines the black, green and yellow colours of the CDU/CSU, Greens and FDP is the most likely option for Germany's next government. But political analysts aren't always renowned for their accurate predictions. 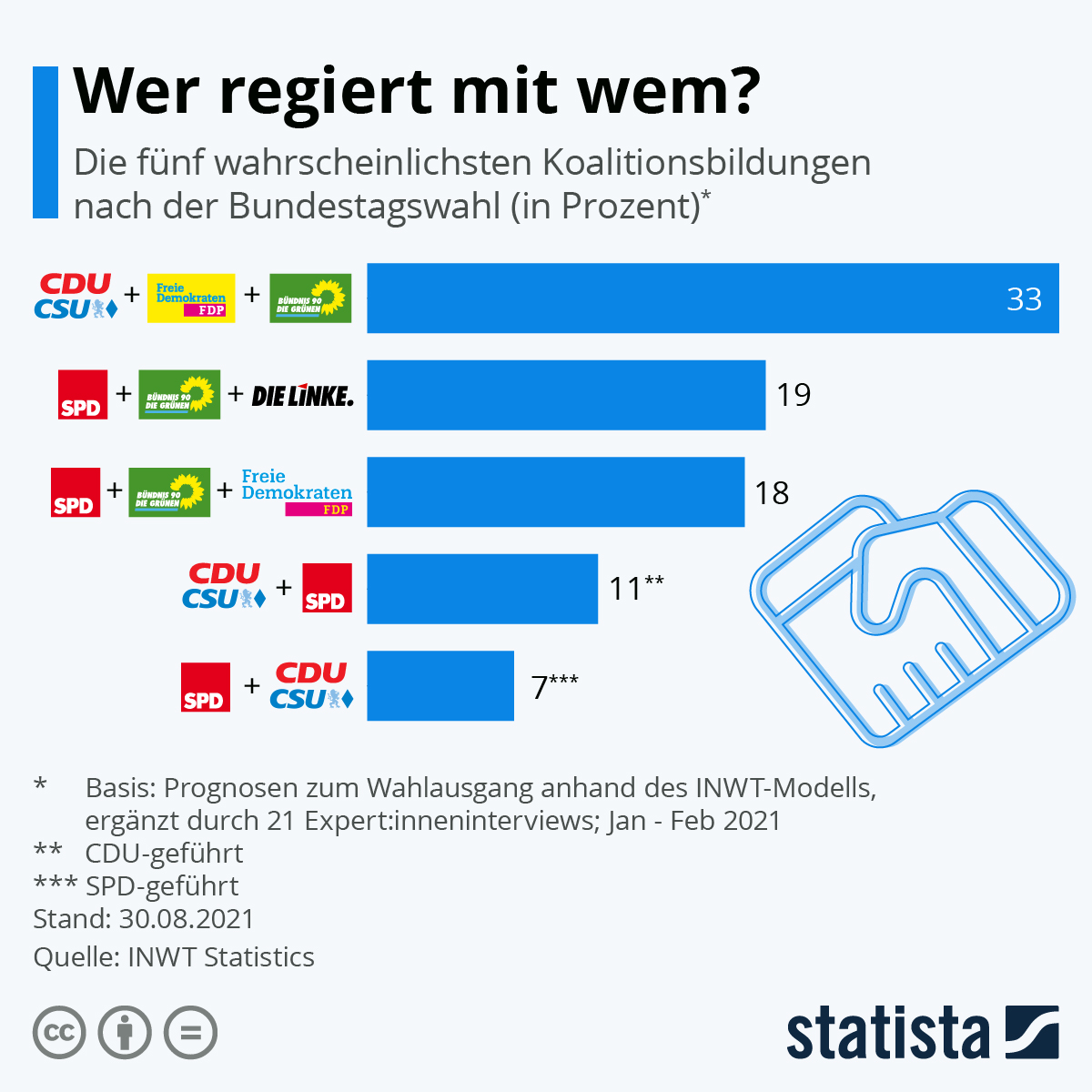 "Who governs with whom?" graph based on interviews with 21 experts. A Jamaica coalition is given a 33 percent likelihood. Source: Statista

Nevertheless, with the CDU/CSU's 196 seats, the Greens' 118 and the FDP's 92, the coalition named after the Jamaican flag would have a pretty healthy 406 seats in parliament. And early indications suggest that the FDP are very keen on this constellation.

Speaking to ZDF after the early vote projections on Sunday night, the FDP's Lindner made no secret about his coalition preference: "I’ll say after the election what I said before it," he told his interviewer. "I see the most internal agreement in a Jamaica coalition.”

With their pro-business, low-tax policies, the CDU/CSU and FDP have a lot in common. In fact, the liberals were the junior coalition partner to the conservatives way back in 2009-2013, before the former lost all their seats and ended up having a four-year hiatus from parliament.

All of which means the sticking point here could well be the Greens. How much will Annalena Baerbock's party be willing to compromise on policies like going climate neutral by 2035, investing in energy grants and social support for families, and hiking up the minimum wage?

It's also worth remembering that, when this coalition was on the cards back in 2017, the FDP walked out at the last minute citing disagreements over migration and energy policy, leaving the country to endure yet another Grand Coalition. What promises will the weakened Union have to make this time around to keep both the liberals and the Greens around the negotiating table?

The Grand Coalition: SPD and CDU/CSU

If the SPD's Olaf Scholz is to be believed, his ultimate goal has always been to put the CDU/CSU back in opposition where they belong. If the CSU are to be believed, there's no way in Helles that the CDU and CSU can contemplate being a junior coalition partner in another GroKo.

The question is: are both of them to be believed? Neither the SPD nor CDU are keen on another Grand Coalition - but they haven't ruled it out. Photo: picture alliance/dpa | Arne Dedert

There's no doubt that both parties are tired of the endless compromises of the Grand Coalition, but with 402 seats between them, the maths of an SPD and CDU/CSU partnership do add up.

With limited options on the table, it would only take a breakdown of the fragile talks between the FDP and Greens breaking down to put Germany back where it started: in GroKo town. If that happens, Scholz would have slightly more leverage to enforce SPD policies as the larger coalition partner, but it would nonetheless be a distinct continuation of the status quo. And many voters would not be happy.

When will we know?

In the 'elephants' round' discussions following the provision results on Sunday, both Scholz and Laschet said they were determined to form a government by Christmas.

The Düsseldorf political scientist Stefan Marschall told DPA that he thinks the coalition negotiations could drag on until the end of December, but "that the parties will make an effort to give us clarity" by then.

Politicians are keen to give the country and its allies the stability and certainty in desperately needs. And, on a more selfish level, both Laschet and Scholz want to be the first man to declare that they've secured the support they need to become the next Chancellor after Merkel.

Nevertheless, the coalition agreements are set to be a hard nut to crack, so it seems fitting that we're likely to be enjoying festive performances of the Nutcracker before we're given any form of certainty about who our next Chancellor will be.