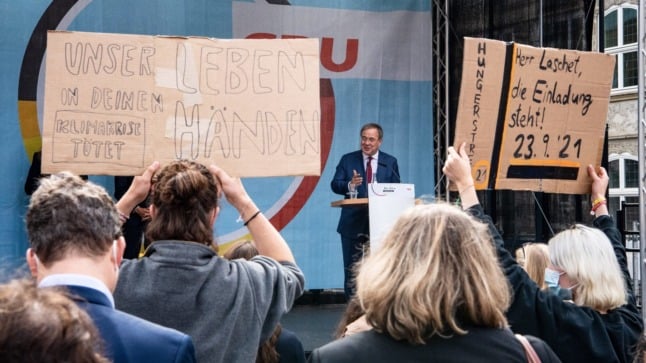 Climate activists on Thursday heckled Armin Laschet, the conservative (CDU/CSU) candidate seeking to replace Chancellor Angela Merkel, in the midst of a rally just over a week before general elections.

Holding posters reading “the climate crisis kills” and “our lives in your hands”, the militants booed Laschet as he sought to address the gathering in the northern city of Bremen.

“We came from all over Germany. We intend to carry out this kind of action at Laschet’s rallies until voting day,” Rifka Lambrecht, 20, who travelled from Berlin, told AFP.

Among the protesters’ demands was for Laschet to meet the six young German climate activists who have been on a hunger strike for over two weeks outside the Reichstag parliament building in Berlin.

Responding to the calls, Laschet told the gathering that along with his rivals – the Greens’ Annalena Baerbock and the Social Democrats’ Olaf Scholz – he is prepared to meet the youths, but only after the September 26th election.

“I ask you to end the hunger strike and return to objective discussions with us,” he said at the rally, stressing that the activists’ demands were being “taken seriously”.

The fate of the next German government depends on voters… but also the parties who are already flirting with other parties as they look ahead to possible governing teams.

On Thursday, Finance Minister Scholz, whose SPD is riding high in the polls, said there was a real opportunity for the so-called Ampel or traffic light coalition. That would involve the SPD, the Free Democrats (FDP) and the Greens (red/yellow/green).

Scholz praised some of the FDP’s policies and said he saw some overlap with the SPD, such as on examining the funding of pensions.

But FDP leader Christian Lindner said the bar was high for his party to enter into this constellation, spelling out that his party wont support policies that are deemed too far to the left.

“We will only enter a centrist government,” Lindner said in Berlin. “With the FDP, there will be no shift to the left in German politics.”

The leading candidates of Die Linke – the Left Party – Dietmar Bartsch and Janine Wissler, are adopting softer tones on the contentious issue of NATO.

They had previously adopted an anti-NATO stance, saying they want to replace the international military alliance with a collective security system that involves Russia.

But their controversial policy may not be a deal-breaker for trying to join a coalition.

“We will certainly not say after the election, before we even explore talks, that Germany must leave NATO. That’s not how politics works,” Bartsch said in an interview with the portal Web.de, reported DPA Thursday.

The Left Party does not demand Germany’s withdrawal from NATO and does not make it a condition for a coalition, Wissler added on Thursday when talking to broadcaster RBB.

Commentators have been analysing the reaction to The Left’s foreign policy.

Serious question: why is Die Linke's desire to leave NATO held up at the ultimate sign of them being "unserious" or "dangerous" on foreign policy?

If Germany left NATO tomorrow, what would concretely change in the life of the average German? (or anyone else for that matter)

Speaking of Herr Scholz, the frontrunner in the race to succeed Merkel will face a grilling from lawmakers on Monday over a probe into an anti-money laundering agency overseen by his ministry.

“Olaf Scholz has accepted our invitation to appear before the finance committee before the election,” said Green party MP Lisa Paus on Wednesday evening, calling it his “last chance to regain lost credibility”.

Lawmakers from opposition parties have asked to put questions before Scholz after his ministry and the justice ministry were raided by prosecutors last week as part of an investigation into the Cologne-based Financial Intelligence Unit (FIU).

The agency, the anti-money laundering section of Germany’s customs authority, is suspected of hushing up reports of potential money laundering and failing to pass along tips to the relevant authorities.

Political rivals have seized on the searches to criticise Scholz, seeing the probe as the latest example of the minister falling short of his oversight duties.

At a televised election debate on Sunday, Scholz’s main rival Laschet said the minister had to take responsibility for regulatory failures that happened on his watch.

But Scholz said last week’s searches were just about assisting prosecutors with their inquiry into the FIU and did not involve the ministry directly.

End of ‘Merkron’: EU’s power couple prepares to bow out

French President Emmanuel Macron was set to host Angela Merkel in Paris on Thursday for the last time before the German Chancellor stands down after the election.

It spells the end of a partnership at the heart of the EU for the last four years.

Macron, 24 years Merkel’s junior, has never hidden his admiration for the German Chancellor’s longevity, but his sometimes abrasive style and pro-European activism has contrasted with the more cautious approach of his German partner.

In 2019, during a rough patch in ties, Merkel admitted the pair “wrestle with each other” and had “differences in mentality”, leading Macron to declare that he believed in “productive confrontation”.

Along with behind-the-scenes wrangling, they also shared moments of genuine public affection.

Their last dinner at the Elysee Palace in Paris will likely see them turn their attention to the diplomatic and humanitarian crisis in Afghanistan, as well as pressing EU issues such as rising tensions with Poland.

Our personal favourite Merkron moment was when a lovely woman mistook Merkel for Macron’s wife during the poignant WWI centenary in 2018.

READ ALSO: ‘Madame Macron?’ No I’m the chancellor of Germany’