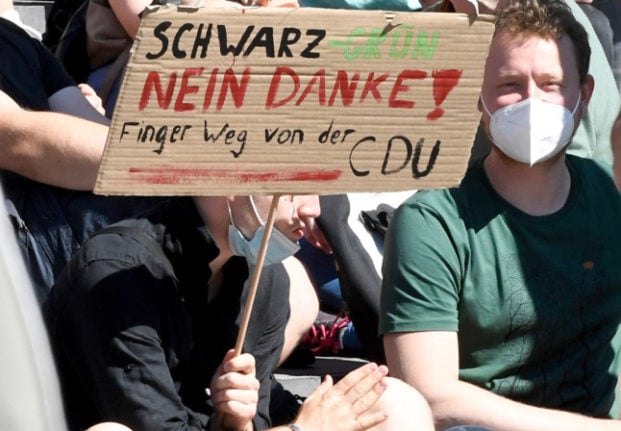 A sign at a Green Party rally reads: "Black-Green, no thanks - get your fingers off the Green Party!" Photo: picture alliance/dpa | Roberto Pfeil

Why does Germany always have coalition governments?

Germany has a ‘proportional representation’ electoral system, so the number of seats a party gets in parliament is equivalent to the percentage of votes they get. Since 1961, no single party in Germany has managed to get enough votes to obtain a majority in parliament, so parties have generally had to group up in coalitions of two or three in order to govern.

For the past two political terms, Germany’s two largest parties – the centre-right Union and centre-left Social Democratic Party (SPD) – have paired up to form a Grand Coalition, or ‘GroKo’. But after eight years in an uneasy partnership, both parties are keen for a change.

That means that Germany is in like to see a fresh government in place in the weeks after September 26th as smaller parties come to the table and try to thrash out a coalition agreement after the vote.

As well as the CDU and SPD, the climate-focused Green Party, the pro-business Free Democratic Party (FPD), and the leftist Linke could all form part of a potential coalition – though they will need at least one of the larger parties to make the numbers work.

With poll ratings of around 11 percent, the anti-migrant Alternative for Germany (AfD) is almost certainly set to win seats in parliament this election, but since every other party has ruled out working with them, it will be near impossible for them to be part of the next government.

What do the polls tell us about possible coalitions?

In early September, the Union sunk to a historic low in the polls, slipping down to below 19, just one point ahead of the rival Greens. Now, their polling average for the previous five polls is just above the 20 mark, while the Greens are averaging just over 16 points. Meanwhile, the SPD has been gaining ground in the past weeks, and now looks set to secure around 25 percent of the German vote. Olaf Scholz, the leader of the SPD, has overseen a major upswing in the party’s popularity. Photo: picture alliance/dpa | Kay Nietfeld

The FDP, meanwhile has been hovering behind the other three parties with average poll ratings of around 12, while the Left Party look set to be the smallest party in the parliament, with just under seven percent of the popular vote.

What coalitions are possible?

Mathematically, the current polls could result in five different constellations in parliament, as the chart below indicates. Here, the parties are represented in their party colours, so the Union is black, the SPD is red, the FDP is yellow and the Greens are, well, Green.

Since the colour of the Left Party is also red, they are represented by the colour purple in the chart.

The first coalition option – and the one with the largest majority according to current polls – would see the Union team up with the SPD and the Greens in a ‘black-red-green’ coalition.

The next largest majority would see the Union team up with the SPD and the FDP team up in a so-called Germany coalition, matching the colours of the German flag.

A fifth option would be a left-leaning coalition between the Greens, Left and SPD, which could just about inch a majority if the current polls remain the same. Could any of these parties actually work with each other?

If the various coalitions in state governments around the country are anything to go by, they certainly can – but that’s not to say it won’t be tricky.

If the SPD’s candidate for Chancellor, Olaf Scholz, is telling the truth, his “personal goal” in this election is to put the Union back on the opposition benches after their two-decade stint in power. That would leave only two options for the SPD after the coming elections: a traffic light coalition with the FDP and Greens, or a left coalition with the Greens and the Left Party.

The way to the negotiating table for these coalitions is bound to be made easier by the fact Scholz and the Greens’ chancellor candidate Baerbock have both said they’re open to a partnership – but the SPD will need to be much more ambitious with its climate targets to truly get the Greens on-side.

When it comes to linking up with the pro-business FDP, however, they’re likely to have even bigger problems. With the FDP supporting low taxes and generous business subsidies and the Greens keen to introduce a wealth tax on top earners and regulate to protect the environment, they could have a hard time thrashing out an economic policy together. Nevertheless, the parties could likely find some common ground on immigration and other social issues.

“When I put the manifestos side by side, I still can’t imagine what offer Mr Scholz could make to the FDP, for example, that would be attractive to us and would not make Ms Esken or Kevin Kühnert  say, not with us,” Christian Lindner, leader of the FDP, told Tagesschau last week. Saskia Esken is co-leader of the SPD along with Norbert Walter-Borjans, and Kühnert is a prominent party member. Christian Lindner, head of the liberal FDP, says he “can’t imagine” how a coalition with the Greens and SPD could work. Photo:picture alliance/dpa | Michael Kappeler

This came just a few weeks after Lindner had made the point that the SPD and Greens have “much more in common” with the Left Party – suggesting he could play hard-ball in potential coalition talks, or turn down the offer to work with the parties entirely if that can’t reach a satisfactory agreement on economic issues.

A coalition agreement between the Greens, SPD and Left would likely be easier to formulate, though there could be issues on foreign policy as the parties seek to reconcile the SPD’s pro-American politics with the Left’s pro-Russia and anti-NATO stance. Equally, SPD’s Scholz has been reticent the issue – possibly for fear of alienating some of the party’s more moderate base by partnering with the ex-DDR Left Party – and a ‘Left’ coalition would also mean settling for a smaller majority.

Another option is for the CDU to go their own way and try and form a ‘Jamaica’ coalition with the FDP and the Greens, though as mentioned, it could take a bit of convincing to get the liberal and environmental parties together around a table. Members of the Green Party hold up a sign saying: “Dear GroKo, if the climate were a bank, you would have rescued it a long time ago.” Photo: picture alliance/dpa | Hauke-Christian Dittrich

And while the parties have managed to form a Jamaica coalition of this sort at the state level in places like Schleswig-Holstein, it’s unclear how the FDP’s current pro-immigration stance would gel with a party that wants to put barriers up to immigration, and how their policy of tax cuts would gel with the small-c fiscal conservatism of CDU leder Armin Laschet, who is keen to neither raise, nor cut, income tax after the Covid pandemic.

The Union did form a coalition with the FDP in the not-too-distant past, which was headed up by Merkel from 2009-2013 – but this ultimately led to the FDP losing all its seats in parliament in the subsequent term and languishing the political doldrums for the next four years.

But why not have another GroKo?

If the popularity of both parties stays roughly the same over the next fortnight, it won’t be possible for the CDU and SDU to form another ‘Grand Coalition’ (GroKo), as they have after the past two elections. This is because, even with the SPD’s comeback in the polls, the CDU have lost so much support that if the two parties banded together, they’d still fall just under the 50 percent threshold needed to secure a majority.

That would mean the two parties would have to find a third party they would both be able to work with – most likely the FDP, a party that combines the social politics of the SPD with the conservative economics of the CDU, or the Greens.

But, as mentioned, the SPD have been vocal about not wanting go into a coalition with the Union again – and it doesn’t seem like the Union would take well to being the junior coalition partner while their long-standing junior partner, the SPD, takes the reins. Markus Söder, head of the Union’s Bavarian wing, the CSU, has ruled out going into a coalition has the junior party after the elections. Photo: picture alliance/dpa | Daniel Karmann

In fact, Markus Söder, the leader of the Union’s Bavarian wing, the Christian Social Democrats (CSU), has effectively ruled out such a partnership by saying that the Union will refuse to be the junior party in any coalition.

“Anybody who thinks maybe the Union will become the junior partner, that’s not going to happen,” he said. “If the Union is not number one, then it is not elected and the Left has to do it.”

The question is, of course, how much are Söder’s views representative of the party as a whole?

How long could all of this take?

If history and the current polls are anything to go by – probably quite a long time. After the elections on September 26th, Angela Merkel’s Union and the SPD will form a caretaker government for as long as it takes to thrash out a coalition agreement between two or more parties (probably three).

After the elections in September 2017, fractious talks stretched until March 2018 until the SPD finally relented on its pledge not to go into government with the CDU for a second time (sound familiar?) and joined forces with Merkel yet again.

With the five possible coalitions all presenting big political obstacles, this year’s elections are also unlikely to present an obvious outcome – and as we’ve mentioned, none of the partnerships are a perfect match.

All of which means that, while we could see a fresh government after a matter of weeks, you shouldn’t be surprised if Merkel remains the German Chancellor (at least in a caretaker capacity) for much longer than anticipated. In short, it all depends on those all-important results on election day.