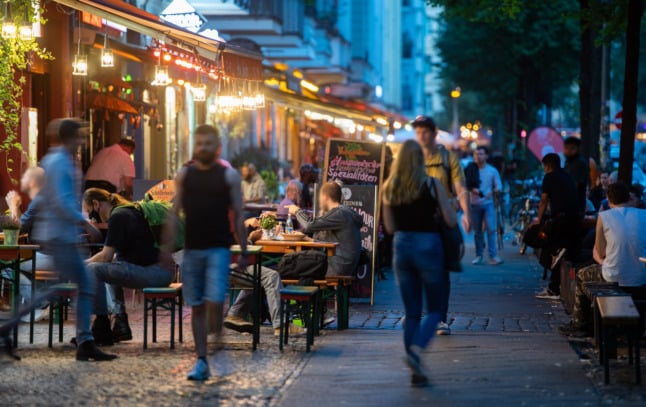 According to a report in the Berliner Zeitung, Berlin’s Senator for Economic Affairs Ramona Pop is campaigning in the Senate to bring in tougher entry restrictions to the unvaccinated.

“The trend is heading in this direction,” Pop told fellow Senators. “We’re already seeing lawsuits and should rather make regulations ourselves than let ourselves drift.”

If put into law, the ‘2G’ rule would effectively mean that people who rely on negative tests (i.e. those who aren’t vaccinated against or recovered from Covid) would be shut out of some areas of public life.

The vaccinated and recovered, meanwhile, would have to show proof of this to go out for a meal at a restaurant or meet their friends for a drink at bar.

The ‘2G’ rule was introduced in fellow city-state Hamburg at the end of August, with venue owners given the choice on whether the bar unvaccinated people from entering the premises.

READ ALSO: 3G to 2G: Hamburg venues can allow entry for Covid-vaccinated and recovered people only

With Senators allegedly mulling a similar option in Berlin, people who haven’t had their jabs could soon have a harder time planning a night out on the town.

But how likely is it to happen – and what would that mean for people who want to enjoy the capital’s famous nightlife?

What venues would this apply to?

So far, a 2G rule – entry only for the vaccinated and recovered – is in place for Berlin’s clubs, meaning anyone who wants to dance the weekend away at Berghain should get those jabs, pronto.

But according to Berliner Zeitung, Pop is keen to now extend the rules to gastronomy business and events such as conferences and festivals as well. However, this may not end up being a blanket rule: in Hamburg, business owners are free to choose the ‘2G’ option if it suits them, but are also free to stick with the slightly more liberal ‘3G, which allows entry for any who’s vaccinated (geimpft), recovered (genesen) or can present a negative test (getestet).

If the same thing is introduced in Berlin, unvaccinated people may face a pot-luck situation where they need to turn up to a venue, test in hand, to see if they’re allowed in.

And if Hamburg’s anything to go by, the 2G option could be quite popular with bar owners – on the first weekend of the new system, several bars in Hamburg’s busy nightlife hotspot opted to introduce the new system, while others said they intended to do so in the near future.

Would social distancing measures still be in place?

In places that choose to adopt a 2G rule, probably not. Much like in the Berlin clubs, opening the venue to people with Covid immunity only (i.e. the vaccinated and recovered) means that social distancing rules like maximum capacity thresholds and spaced-out seating can be dispensed with altogether.

However, as in Hamburg, the mask-wearing requirement is likely to stay in place in indoor spaces when heading to the bathroom or bar, regardless of whether the venue is open to just vaccinated and recovered people, or people who’ve been tested too.

Nighttime early closing hours and curfews are also likely to be dropped for so-called ‘2G’ bars, meaning Berlin’s nightlife would once again be a 24/7 affair (for the vaccinated at least).

READ ALSO: Berlin clubs to reopen on Friday – but only to vaccinated and recovered

What about under-18s and people who can’t get vaccinated?

There’s no detail on this as yet, but once again, Hamburg’s system may tell us something about how this would work.

The German Vaccines Commission (STIKO) has only recently issued a general recommendation for 12-17 year olds to get inoculated against Covid.

In the view of the Hamburg Senate, this age group therefore haven’t had long enough to get a full course of jabs – which means they don’t have to show proof of vaccination or recovery to enter one of the ‘2G’ venues. Since no Covid vaccine has yet been approved for younger children, the same goes for under-12s. In Hamburg, under-18s are exempt from the requirement to show proof of vaccination or recovery. Photo: picture alliance/dpa | Axel Heimken

For other people who are unable to get vaccinated, such as pregnant and immune-compromised people, the rules are much firmer.

“For these people, it is important – above all in the interest of self-protection – not to expose themselves to unnecessary risks of infection and to comply with the AHA rules and avoid places where people congregate without social distancing, for example,” the Hamburg Senate explained in a statement. “Therefore, it is medically advised not to go to such events or even places.”

In plain English, this means that – assuming Berlin adopts the Hamburg model – this group of people would also be excluded from certain bars and restaurants that plump for ‘2G’.

What do business owners and events organisers think?

As it stands, there isn’t a consensus on this – and there are arguments both for and against it. The argument in favour is that bar and restaurants owners would be able to fill their venues to maximum capacity once again.

But with a significant proportion of their customer base excluded, who knows how many would come?

“Freedom of choice is by far the best option,” Thomas Lengfelder, head of the Dehoga restaurant association, told Berliner Zeitung.

“There is no unanimous opinion among us. Social distancing regulations reduce each restaurant’s capacity by 30 percent – but on the other hand, I don’t think it’s a foregone conclusion that 2G will really bring people into the restaurants.” Meanwhile, conference organisers have grave concerns that a ‘2G’ rule would be needlessly prohibitive to international visitors, who may have been vaccinated with non-EU approved vaccines.

“2G can be a building block for the successful restart of the event industry, but we have to look at each trade fair individually,” Emanuel Höger, spokesman for the Grüne Woche & co. trade fair, told Berliner Zeitung.

“For trade fairs that have a large international audience, the situation is more complex because certain internationally applied vaccines, such as Sputnik or the vaccine from the Chinese company Sinovac, currently lack European approval. Here, we’d need additional solutions.”

But is this definitely going to happen?

That all depends how much support there is for the plan in the Berlin Senate. At the moment, it’s primarily a proposal that’s been put forward Pop, though as the Senator for Economic Affairs, she certainly isn’t without influence.

With Hamburg’s scheme seemingly working well so far, Berlin politicians could feel confident enough to  push forward with the plans fend off a potential backlash from those who think the measures are too harsh.

Whatever happens, we’ll be sure to keep you informed.