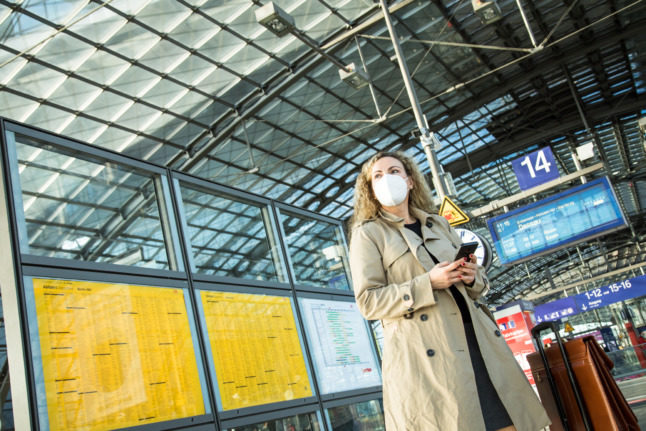 After three weeks of on-and-off rail disruption, the German train drivers’ union (GDL) and Deutsche Bahn (DB) are still at an impasse in their ongoing wage dispute.

While DB claims it has made improvements to its offer of staged wage increases and is prepared to negotiate over a potential Covid bonus, the GDL has accused the rail operator of being unwilling to move “a millimetre” from its original position – even after two previous strike actions in August.

So Germany’s rail passengers are in for yet another round of walkouts this week – and this one’s going to be by far the longest yet.

If you’ve got a trip planned, or are planning to use DB-operated transport in a German city, here’s what you need to know.

Is the strike due to affect passenger trains?

Yes – but only from Thursday. GDL plans to kick off its next round of strike action on Wednesday evening at 5pm, but this will initially only affect freight trains.

From Thursday at 2pm, however, the strike will be extended to passenger rail services, meaning travellers can expect long delays and limited services on a number of networks nationwide. This will run until Tuesday, September 7th, at 2am.

At this time, passengers can expect a few trains and replacement buses to be running – but nowhere near the full timetable.

“Deutsche Bahn will offer a reliable basic service,” the operator explained on Tuesday. “Nevertheless, we can’t guarantee that every passenger will be able to reach their destination.”

What percentage of services will be affected?

That’s hard to say at present, but during the last two strikes in August, only around 30-40 percent of normal services remained in operation.

Due to the concentration of the GDL in the eastern regions of the country, train services between eastern cities like Berlin, Leipzig and Dresden were particularly hard hit by the strikes, and this looks likely to be the case yet again.

From September 2nd-6th, Berlin’s S-Bahn trains will only be running a partial service, and regional trains to places like Cottbus, Eberswalde, Dessau and Stralsund will be heavily impacted. The same applies to trains in the north-eastern state of Mecklenburg Western-Pomerania.

But don’t expect an easy ride on services in other parts of Germany, either: following the strike announcement on Monday, DB has issued warnings about disrupted services nationwide, including city trains, regional trains, long-distance trains and cross-border services running to Austria, Belgium, France, Italy, Switzerland, the Netherlands, and the Czech Republic. Cross-border trains to cities such as Paris will also be affected by the strikes. Photo: picture alliance / Christophe Ena/AP/dpa | Christophe Ena

According to the latest information from Deutsche Bahn, there will be no trains at all running between Germany and Poland, while trains to cities such as Paris, Budapest, Prague and Zurich will also be impacted.

You can expect to see S-Bahn and intercity services affected in other major cities like Stuttgart, Munich, Hamburg and Bremen as well – so it’s worth keeping an eye on live updates on the Deutsche Bahn website if you still intend to travel.

There is one piece of good news, however: the Sylt Shuttle, which runs between the North Sea islands and the mainland, won’t be affected by the strikes.

If you’ve already booked an advance ticket for a train between September 2nd and 6th, Deutsche Bahn will allow you to either cancel it free of charge, or use it on a flexible basis anytime from August 30th to end of service on September 17th.

This applies even if you’ve booked a Super-Saver or Saver ticket with a specific date and time printed on it. If you’d like to choose another train for your journey, you should also be able to transfer your seat reservation onto a new service for free.

And don’t worry if you need to complete your journey on an ICE train when you were originally booked onto a regional one, since DB says you’re permitted to switch to a different type of train if necessary as well.

What rights do I have if my train is delayed or cancelled?

If you face delays of more than 60 minutes – or your train is cancelled entirely – due to the strikes, you should be entitled to compensation as usual.

You can make your claim for a full or partial refund here on the Deutsche Bahn website.

With far fewer services running during the strikes, those that are running could well be packed out, so Deutsche Bahn is advising passengers to reserve a seat ahead of their journey.

In addition, the train operator is advising people not to take any bicycles with them for the duration of the strikes – though they will transport your bike for free if you were planning on taking it on a long-distance train.

If you’d like to arrange for your bike to be transported within Germany, you’ll need to fill in this online form and enter the code Fahrrad19 at the checkout.

Bicycles will take two days to be delivered to most destinations in Germany (though delivery to the North Sea and Baltic islands will take three days), and can only be scheduled for free delivery between August 30th and September 7th. Unfortunately, the courier won’t be able to transport e-bikes. Deutsche Bahn has requested that customers leave their bikes at home – or send them via their long-distance courier service – during the strikes. Photo: picture alliance/dpa | Bernd Weißbrod

In general, Deutsche Bahn is advising people not to travel during the strikes, so if you don’t need to travel this week, it may be better to postpone it.

If you can’t get out travelling between the 2nd and 6th, however, Deutsche Bahn recommend rescheduling your journey to Saturday or Sunday morning to make the best use of weekend services.

For more information (in English) on potential disruptions and your passenger rights, check out Deutsche Bahn’s notice on the upcoming rail strikes here.