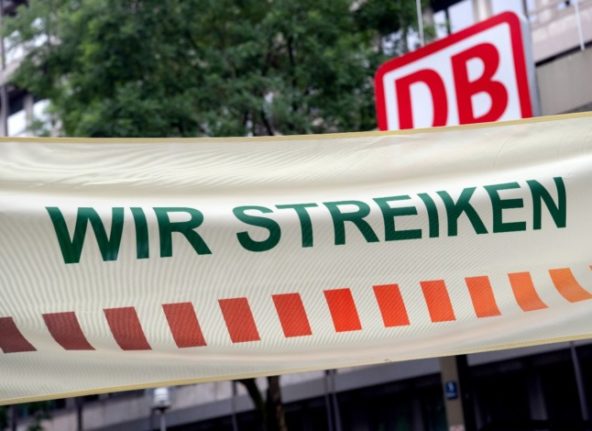 The planned action will take place from 5pm on Wednesday, September 1st and end on Tuesday, September 7th at 2am – marking it the longest industrial strike so far in the ongoing dispute between the GDL and Deutsche Bahn.

The renewed walkouts will bring fresh pain for commuters as summer holidays draw to a close, and are likely to further aggravate supply chain woes.

Beginning on Wednesday with a walk-out on freight trains, the strikes will be expanded to passenger trains from Thursday at 2am.

It will mark the third and longest round of stoppages yet after GDL called two rounds of strikes earlier in August.

The train drivers’ union and the state-owned railway company have been at loggerheads for several weeks over a disagreement over wage increases.

GDL argues that it is fighting for better remuneration for train drivers, and is demanding a 1.4-percent pay hike and a bonus of €600 for 2021, and a further wage rise of 1.8 percent in 2022.

Deutsche Bahn, meanwhile, had offered to phase in a 3.2-percent wage increase in two steps, but wants to apply it in 2022 and 2023 following a pay freeze this year. The company has also agreed to consider proposals for a Covid bonus, but has not yet named a figure.

The train operator has suffered huge losses due to a drop in demand for travel over the course of the Covid pandemic and is struggling to rebuild kilometres of tracks destroyed by deadly floods that struck western Germany in mid-July.

‘Campaign against their own employees’

In a press release announcing the move on Monday, GDL chairman Claus Weselsky claimed that the railway operator “hadn’t moved a millimetre” from its original position.

The GDL pointed out that DB competitors such as Transdev, Netinera and Go-Ahead had recently agreed to the union’s demands for wage increases and a bonus for working throughout the pandemic.

“Deutsche Bahn should take this as an example,” said Weselsky. “The unfortunate campaign against their own employees and the legitimate representation of their interests by the GDL must to come to an end. The behaviour of managers is absolutely unworthy of a large employer.”

“The railway workers deserve recognition and appreciation. They will not stop asking for it until they are granted it,” he added.

Deutsche Bahn hit back on Monday, saying the latest strike call was “in no way justified”.

“A collective wage agreement is reached through negotiations and cannot be dictated,” the company’s personnel director Martin Seiler said in a statement.

The previous strikes saw long-distance and urban services running at 30 to 40 percent capacity, and Deutsche Bahn said it expected a similar impact on travellers this week.

The company has not yet set out a replacement train timetable for the duration of the strikes.