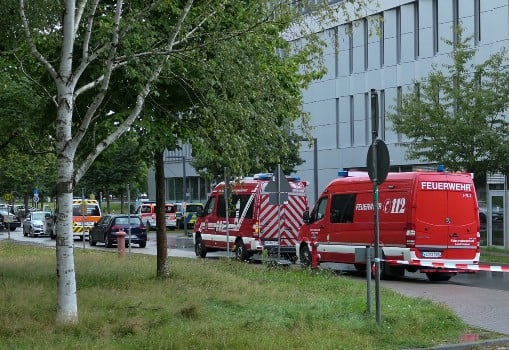 On Tuesday morning officers were searching for further contaminated substances on the university’s Lichtwiese campus, where the poisonings had taken place.

Six of the affected people have been taken to hospital, according to police. A 30-year-old man’s life was in danger due to the severity of his symptoms and on Monday evening he remained in hospital in a critical situation.

All of the victims complained of nausea, while some noticed that the extremities of their limbs had turned blue.

“We are shocked by the apparent crime that occurred at our university,” the university’s president, Tanja Brühl, said on Tuesday.

Brühl added that police investigators had informed her that the victims are likely to have been victims of a poison attack. She promised to “make personal contact with them as soon as possible, if their condition allows it.”

Police suspect that several milk and water bottles on the campus were contaminated over the weekend. The affected bottles were all stored in a room that was freely accessible to people on the campus.

Police advise anyone who drank from bottles bought on the campus and who are experiencing nausea or have noticed a change in the colour of their fingers and feet to immediately contact a doctor. They say that the contamination is easily identifiable due to the sharp smell the poison emits.

“I wish the affected all the best, a quick recovery and can assure them my full support,” Angela Dorn, the science minister for the state of Hesse, which includes Darmstadt, said in a statement.

“Together with the university and investigators we now need to clarify the situation as quickly as possible,” Dorn said.