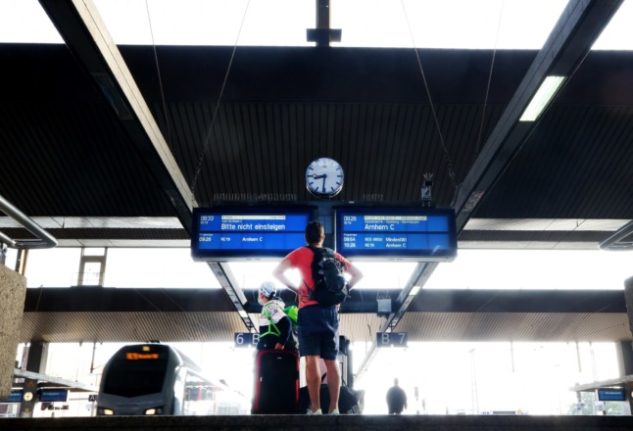 Members of the GDL train drivers union walked out on passenger rail services at 2am on Monday in the two-day strike held in a dispute over higher wages. Strike action on cargo trains began on Saturday, and will also end at 2am on Wednesday.

Rail operator Deutsche Bahn (DB) said it expects to be able to maintain services of about 30 percent on long-distance services and an average of about 40 percent on regional and S-Bahn services on Tuesday.

“We will also offer our basic service on the second day,” a DB spokeswoman said on Tuesday morning. However, travellers have to be prepared for numerous train cancellations and delays similar to what happened on Monday, DB said.

There are regional differences in the impact of the strike. DB expects that in Saxony, Saxony-Anhalt and Thuringia only 10 to 15 percent of trains can run, while elsewhere there will be significantly more services.

That’s because the GDL union has more members in eastern states.

Epidemiologist Hajo Zeeb said the strike was taking place at a tricky time when it comes to the pandemic because the number of Covid infections across Germany is rising significantly.

Full trains increase the risk of infection, Zeeb, a scientist from the Leibniz Institute for Prevention Research and Epidemiology in Bremen, told DPA.

People who have to travel by train despite the strikes now rely on less space on the trains that are running, he said. “This leads to more contact and, yes, increased infection risks, especially with the Delta variant.”

The epidemiologist recommends that travellers avoid train journeys or switch to less busy times if possible. Deutche Bahn said in response to a query that many travellers had taken advantage of the rules and changed their trips to take place after the strike ends.

READ ALSO: Germany’s train strikes – what rights do you have as a passenger?

DB urged passengers to have patience. On-board staff are helping passengers to keep distance on the replacement trains, a DB spokesman said. Long-distance trains are also being cleaned more during the pandemic.

What’s the strike about?

At the weekend DB tried to avert the strike by proposing negotiations on the ‘Coronavirus bonus’ for employees as demanded by the GDL.

But the GDL drivers’ union rejected the offer, describing it as a “smokescreen”.

This is the second wave of strikes in the ongoing wage dispute between Deutsche Bahn and the GDL. A two-day strike was held earlier in August.