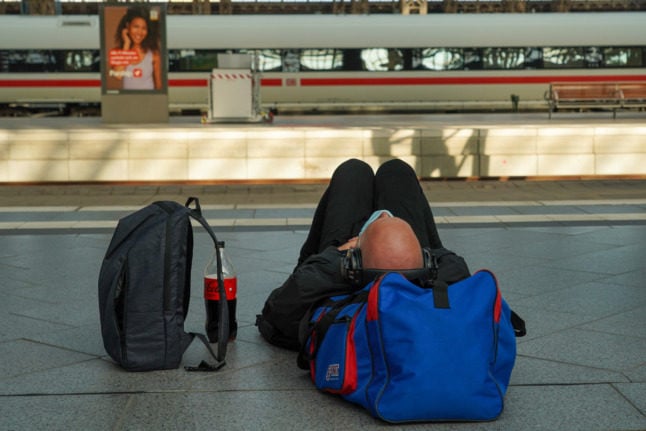 A passenger waits for a train at Leipzig station on Thursday afternoon. The industrial action ended early on Friday morning - but more strikes could come. Photo: picture alliance/dpa/dpa-Zentralbild | Peter Endig

A spokesperson for Deutsche Bahn in Berlin said that traffic had largely started normally in the early morning – but warned that of continued disruption in certain regions.

“We ask our passengers to inform themselves on Deutsche Bahn’s website or app before starting their journey,” he said.

The German Train Drivers’ Union (GDL) had ended its strike in passenger and freight transport at 2.00 am. The GDL wants to enforce higher pay and better working conditions with the strike. Further strikes are possible, but there will be no action this weekend.

The GDL plans to discuss the next steps at a meeting next week.

‘They have shown Deutsche Bahn the red card’

The union will take stock of its strike in Berlin on Friday morning (11:00). The solidarity of the members across all occupational groups was enormous, the union announced earlier.

“They have all shown Deutsche Bahn the red card,” it said.

Around 5,400 of the total of 19,700 train drivers took part in the strike, the state-owned company said in an initial assessment on Friday. In addition, only 120 employees in signal boxes, maintenance and service at railway stations were on strike.

This shows that “virtually no one in the infrastructure sector went on strike”, a railway spokeswoman told DPA.

There were also reports from the regions this morning that train traffic had returned to normal.

In the east of the republic, which was particularly hard hit by the strike, no more cancellations were expected, according to DB. “By and large, things are looking very good,” a spokesman said.

In Hamburg, the S-Bahn trains were running as scheduled again. At Berlin’s S-Bahn, operations had were on track once more, it said – though passengers on two lines could see some disruptions in the service. According to the union, the strike, which had already started on Tuesday evening in the freight sector, also affected the infrastructure.

For the first time, there were strikes in six signal boxes, as well as in parts of the workshops and the administration. According to the railway, it was possible to run on a reduced replacement timetable – though in long-distance services, about a quarter of the usual journeys were offered.

In the collective bargaining round, Deutsche Bahn and GDL have agreed on a wage increase of 3.2 percent. However, the union and company executives are arguing over when the increase should take effect and how long the new collective agreement should be valid.

The railways want to keep the costs of the collective agreement low because they incurred high losses in the corona crisis. In addition, the federal government has demanded savings in the group in return for billions in financial aid.

There has been a collective agreement with the larger railway and transport union for just under a year. At the beginning of 2022, the employees will receive 1.5 percent more money, and nobody will be dismissed as a result of DB’s financial black hole.

However, the GDL does not want to accept a zero increase this year and is also demanding a ‘Covid’ bonus of €600 in return for working through the pandemic.

Union leader Claus Weselsky is threatening further strikes if the railways do not put a better offer on the table.