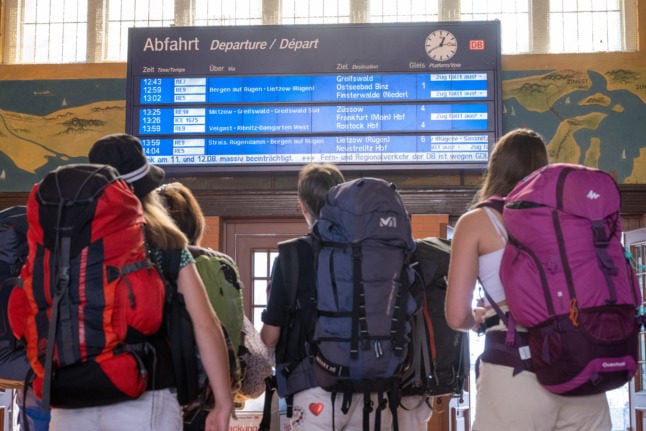 According to Deutsche Bahn, substitute timetables have been in effect since Wednesday.

About 25 percent of the long-distance trains are running, while 40 percent of regional trains are currently in service – with strong regional differences. According to the railway, the company is “doing everything in its power” to return to regular service as soon as possible after the strike ends on Friday night.

Reports from the operator suggest that, much like Wednesday, the east is more affected by the strike than the west: More trains are likely to run on the western German regional trains on Thursday, because there are more civil servant train drivers on duty here who don’t have the right to strike.

Since GDL is most active in the East, hardly any trains were running on Wednesday between Berlin, Leipzig and Dresden, while other intercity routes have also been impacted.

At Berlin’s main station on Wednesday, the departures board was largely blank. Of the few trains shown, some were cancelled, others delayed.

“I think the strike is totally unnecessary,” said Peter Gramlich, 78, who was travelling to the western city of Bochum to visit his mother-in-law with his wife Heike, 63.

The coronavirus pandemic makes the situation worse, according to Gramlich. “Our train will now be very full,” he said, indicating the difficulty they will have social distancing from other passengers. Passengers board a packed-out Flixtrain headed for Berlin Hauptbahnhof. Cities like Berlin in the eastern regions of Germany have been particularly badly affected by the strikes. Photo: picture alliance/dpa | Christoph Schmidt

Meanwhile, Matthias Hattendorf, 66, who turned up at the station early this morning to make sure he got a train home to Hamburg after visiting Berlin, criticised the timing of the strikes.

“I think this was the wrong time,” said  “Tourism is starting to get going again. People want to travel.”

However, a recent survey by YouGov suggests that around a third (31 percent) of people in Germany have some sympathy for the strike by the GDL. More than one in two (55 per cent) said they didn’t agree with it, while 14 percent of the respondents were undecided.

According to the data, understanding for the GDL strike is slightly higher in the East (39 per cent) than in the West (29 per cent).

The train drivers’ union is fighting for more money and better working conditions for its members at Deutsche Bahn.

Unlike the larger railway and transport union (EVG), which signed an agreement with DB last autumn, it does not want to accept a pay freeze this year after train drivers worked throughout the pandemic.

However, the move has also been framed as part of an ongoing power struggle between EVG and GDL, with some accusing GDL of using the strike to gain increased influence with rail employees.

The GDL is demanding wage increases as in the public sector of about 3.2 percent over 28 months, as well as a Covid bonus of €600 euros in the current year. But it has said it is willing to negotiate.

There is also a dispute about company pensions.

Due to losses of billions of euros in the pandemic, the railways wants to increase wages incrementally over a duration of 40 months. In addition, the company said it would rule out the dismissal of employees for operational reasons.

The strike is set to continue until Friday at 2:00 am local time.