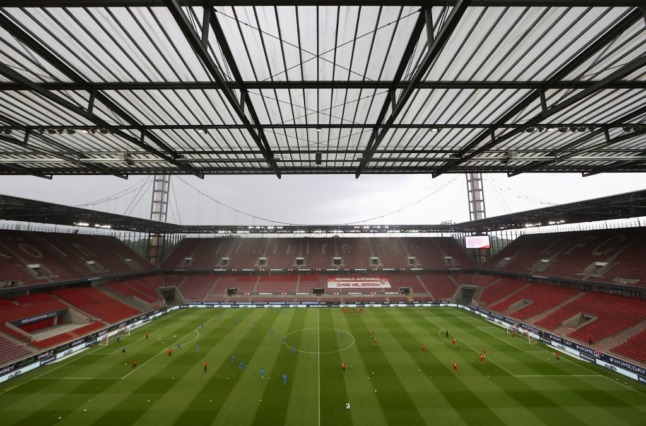 Only those who have been vaccinated against Covid-19 or who have recovered from it will be able to enter the FC Köln stadium soon. Rolf VENNENBERND / POOL / AFP

The CDU/CSU and SPD candidates for chancellor, Armin Laschet and Olaf Scholz, respectively, are both in favour of charging for coronavirus tests from autumn onwards, they told the Süddeutsche Zeitung on Sunday.

Scholz said: “It is important to me that those who do not want to be vaccinated continue to have the opportunity to take part in public life by taking a test.” However, the general public will not pay for these tests “in the long term”.

“I think that in autumn all adults without a health reason for not being vaccinated will have to pay for them,” he said.

Less than two months before the federal election, the two candidates have similar views on this key issue in dealing with the pandemic. On Tuesday, the premiers of Germany’s 16 federal states are due to meet to discuss how to deal with the country’s rising infection rates and concerns about a fourth wave.

CDU president Armin Laschet told Sunday paper Bild am Sonntag earlier that he was against putting people who tested negative for the coronavirus at a disadvantage to those who had been vaccinated.

“The state must not exclude those who have been vaccinated, recovered or tested from participating in social life,” said Laschet. The “3-G rule” (geimpft, getestet, genesen or vaccinated, tested, recovered) has “proven to be sensible, measured and feasible”.

But from autumn onwards, anyone who has not been vaccinated should expect “that the daily tests will no longer be paid for by taxpayers”. However, Scholz said that “tested” should remain an option in addition to “vaccinated” and “recovered”.

Laschet’s party colleague, Union parliamentary group leader Ralph Brinkhaus, took a tougher line, telling Sunday paper Die Welt am Sonntag that he didn’t think unvaccinated people who had been tested would still be granted the same rights for much longer.

He thought this would work itself out naturally in the autumn “because hotels, clubs and event organisers will say: Sorry, if you’ve only got a test, you can’t come in “.

First-division German football club FC Köln is likely to fuel this debate because they have said they will only allow spectators who have been vaccinated against Covid-19 or who have recovered from the virus into the stadium from the end of August.

Brinkhaus said: “I think the pressure from the vaccinated part of the population will increase enormously. And that is completely understandable.”

However, not all parties agree. Stephan Thomae, FDP deputy chair, told the SZ: “Politicians shouldn’t just leave the decision to entrepreneurs and traders.”

He also said he thought it was a mistake to charge for Covid-19 tests as they were still too important in the fight against the pandemic to create any obstacles. Co-chair of the Green party Robert Habeck said on German TV channel ZDF that he was in favour of them staying free.

Scholz, Germany”s Vice-Chancellor, said he hoped that, thanks to the vaccinations, the country would get through the autumn and winter better this time.

“There shouldn’t be another lockdown,” he told the SZ, adding that face-to-face teaching in schools had “top priority”.