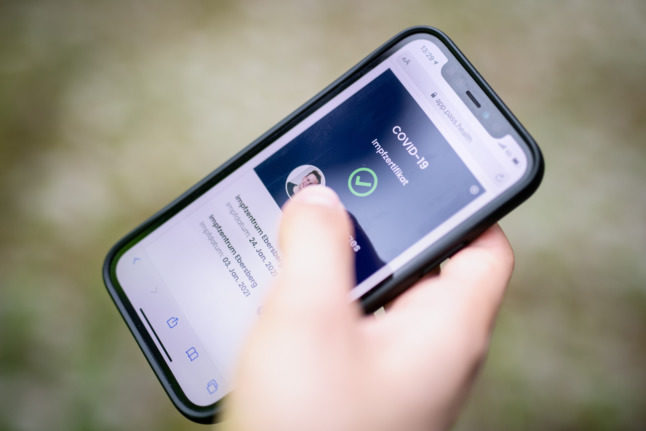 From autumn, visitors to museums, pubs and other indoor venues may have to have their Covid health pass at the ready. Photo: picture alliance/dpa | Matthias Balk

A Covid ‘health pass’ is evidence of Covid vaccination, recovery or a negative Covid test result that could be shown in order to visit events or attractions, or to enjoy indoor dining, shopping, or a visit to the gym, for example.

Germany does have a version of this already in place, which was phased in around May after several months of shutdown as a way of trying to keep Covid rates at a low level.

But the implementation of it varies from region to region – for instance in Berlin, proof of vaccination, recovery from Covid or a negative test is needed to go to the gym or to dine indoors, while other states have opted to drop this requirement when infection rates are lower.

People are also not required to have the digital pass at the moment – they can show a paper version of proof instead.

An official ‘health pass’ system has been introduced in other European countries such as France and Italy as a means of keeping infections down.

Now a more standardised, nationwide version of this system, similar to some neighbours, is potentially on the agenda in Germany as well.

Who’s pushing for this?

Health Minister Jens Spahn (CDU) and his ministers called for new measures in a report sent to state leaders ahead of Covid crunch talks next week. The report, which was presumably intended for ministers’ eyes only, was rapidly obtained by German news agency DPA.

In the leaked brief, the Health Ministry argued that the moves were necessary “in order to protect the health system from excessive strain and to shield the groups of people who cannot yet be vaccinated from a potentially serious illness”.

Ministers believe that infection rates are rising again because many people are acting the same as they were before the pandemic started.

While a strict lockdown like the ones we saw in the second and third Covid waves is unlikely due to the proportion of the populace who are now vaccinated, stringent measures such as mask-wearing, social distancing and a broader ‘health pass’ system should still be used to keep infections down, ministers argued.

OK – so what would I need to carry with me?

That all depends on what your situation is. In German the system is known as ‘3G’ – geimpft (vaccinated) genesen (recovered) and getestet (tested).

If you’re fully vaccinated, you can either bring your yellow vaccine booklet along with you on an evening or day out, or get hold of a digital vaccination pass, otherwise known as a ‘CovPass’, on your phone. You can get one of these by bringing your yellow booklet and some form of I.D. along to your local pharmacy, where you’ll be given a QR code to scan into the CovPass or Corona Warn app. Your local pharmacy should be able to help you convert your vaccination pass, proof of recovery, or test into digital form. Photo: picture alliance/dpa | Jörg Carstensen

If you’ve recovered from Covid fairly recently, you’ll need a positive PCR test taken more than 28 days and less than six months ago. This document can be issued by your doctor or a testing laboratory. If you’re not keen on bringing a paper copy with you, it can also be digitalised in much the same way as a vaccine pass. Simply take the test to a pharmacist, get the QR code, and scan it into either the CovPass or Corona Warn app. This will then be valid for six months.

If you have neither of the above, you’ll have to supply a negative test instead. This can also be converted into a digital pass on the CovPass or Corona Warn app, but unlike evidence of recovery or vaccination, it will only be valid for 24 hours.

If the German government does tighten the rules, they may consider making a digital pass compulsory but we haven’t heard anything about this yet so they might not go down this road.

Will things get trickier for unvaccinated people?

It certainly looks that way at the moment. As anyone who’s had one knows, the Covid test isn’t exactly pleasant, and unvaccinated people may have to do them a lot more often if they want to continue enjoying things like restaurants, cinemas and shops.

In addition, the government plans to soon – probably from mid-October – scrap free Covid rapid tests, meaning people who haven’t had their jabs may have to pay around €20-30 for every nasal swab.

READ ALSO: When (and why) Germany plans to scrap free Covid tests for all

There has also be discussion of changing the so-called ‘3G’ rule (geimpft, genesen, getestet) – meaning vaccinated, recovered, tested – to a ‘2G’ rule that would only cover vaccinated or recovered people.

That would effectively bar a small segment of the population from shops and indoor dining for a certain amount of time – unless, of course, they opt to get jabbed.

This would be extremely controversial.

Jens Spahn explains that another lockdown is avoidable if enough people get vaccinated. “Every single person helps decide how safe autumn and winter will be for all of us. That’s why vaccination is a patriotic act.”

However, Spahn and his team want the ‘2G’ rule to come into force only if infections truly spiral out of control. At the moment, it’s unclear what the means in terms of concrete numbers, but we would imagine that the threshold for taking such a step would be high.

How would this be enforced?

That depends on where you are. For smaller, independent businesses like local pubs and restaurants, it’s likely you’ll just be asked for your test or vaccine certificate after being seated, though larger businesses like chain shops are likely to have someone checking passes at the door.

In other countries that have implemented a health pass system, digital solutions have also come into play – so don’t be surprised to see QR code scanners stationed outside H&M or MediaMarkt in the coming months.

Have the plans been confirmed yet?

Not yet, though they will be up for discussion and debate at the upcoming meeting between Chancellor Angela Merkel and the premiers of each of Germany’s 16 states on Tuesday, August 10th.

Decisions on measures such as these are usually the remit of the states – since states are responsible for things like museums, local hospitality, transport and schools – but throughout the Covid-19 pandemic, the federal government hasn’t been afraid to flex its muscles as well.

Not only has Merkel’s team set policies like social distancing measures, but they’ve also brought the states back into line with legislation like the ’emergency break’, which forced states to introduce harder lockdown measures once infections reached a critical point.

The talks between Merkel and the state leaders on Tuesday are intended to thrash out a Covid policy for the coming months and present a unified front in the face of divided opinions. However, after the Health Ministry’s report was leaked to the press this week, numerous state leaders – and opposition parties – voiced their dismay at proposals that may result in excluding the unvaccinated from some areas of public life.

“Threats don’t get us anywhere,” said Mecklenburg-Western Pomerania state premier Manuela Schwesig. “We have to convince (people to get vaccinated).”

Brandenburg state premier Dietmar Woidke agreed with Schwesig’s assessment: “Nobody should be excluded from public life,” he said.

“For essential things like public transport or visiting the town hall or hospital, it must be possible to have access with just a mask or a test,” Spahn told the regional daily Münchner Merkur on Thursday.

COVID-19 RULES
Which Covid rules are likely to return to Germany in autumn?