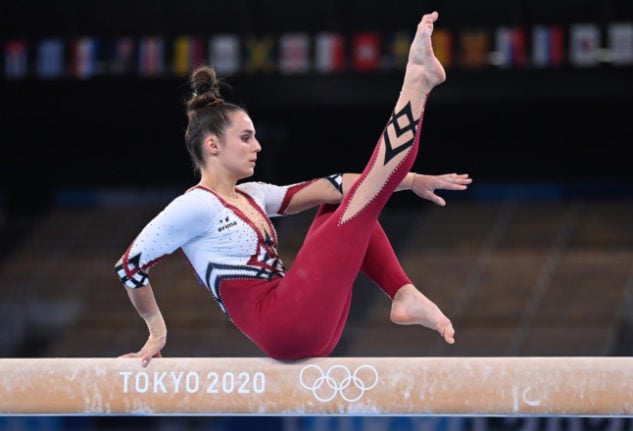 German gymnast Pauline Schäfer from competes in her bodysuit to make a statement about sexism in the sport. Photo: picture alliance/dpa | Marijan Murat

Since the games began on Friday, Germany has already enjoyed some success in team dressage, canoeing, swimming and archery – and as of July 28th, the country’s teams have scooped two gold and five bronze medals and are ranked 13th in the world.

And these medals are just drops in the ocean: counting both the Winter and Summer Olympics, German athletes have won over 1750 medals in their time: around 578 gold, 589 silver and 587 bronze.

But sporting achievement is not the only thing making Germany’s teams notable this year. From fighting women’s sexualisation in gymnastics to helping young people access athletics, some teams and individuals are using the Games to help spread important social messages.

Here’s a rundown of the German athletes and sportspeople you need to know about at this year’s Games.

It may have seemed like a small costume change, but the German women’s Olympic gymnastic team made headlines around the world for taking a stand against sexism. Instead of their traditional leotards, they opted to wear full-length unitards to compete in a protest against the sexualisation of women in the sport.

The team, consisting of Elisabeth Seitz, Kim Bui, Pauline Schafer and Sarah Voss, also wore the full-length bodysuits at the European Artistic Gymnastics Championships in April. Though the bodysuits are permitted, they have up to now only been worn for religious reasons.

In Training, the German team debuted another stunning design sure to inspire! Team members have spoken about fostering confidence through apparel choice! #tokyo2020 #gymnastics pic.twitter.com/XtZifJQ3dx

The protest was met with praise and support from the gymnasts’ fellow athletes, as the team members said they wanted to be “role models” to girls pursuing sports who are often faced with sexual harassment and even abuse. They emphasised that people of any gender should be allowed to wear whatever uniform makes them most comfortable whilst pursuing the sport. This year, the German women’s gymnastics team opted to dispense with skimpy leotards that are normally standard attire for female gymnasts at the Games. Photo: picture alliance/dpa | Marijan Murat

Gymnastics has long had a problem with sexual abuse, with several well-known trainers and doctors being accused of misconduct. Most prominently, former USA Gymnastics doctor Larry Nassar was sentenced to over 100 years in prison in 2018 after sexually assaulting 265 young women and girls using his position of authority as a medical official.

Allegations against Nassar came as part of an even wider and more extensive gymnastics sex abuse scandal in the USA which brought to light the misconduct of gym owners, coaches and other staff.

Sexualisation is still an ongoing issue in gymnastics. Days before the Games began, the Norwegian women’s beach volleyball team received a fine for refusing to play in bikini bottoms during the European tournaments. By comparison, the men’s standard uniform consists of long shirts and knee-length shorts.

With their outspoken and inspiring approach to empowering other women and girls within the sport, the team has made waves throughout the competition and attracted media attention from all over the world to bolster important conversations about sexualisation and sexual misconduct.

Ricarda Funk is a slalom canoeist from Augsburg, Germany who had made waves by winning Germany’s first gold medal of this Olympic season. In her nail-biting win in the women’s slalom K-1 category, she managed to beat favoured candidates Jessica Fox from Australia and Maialen Chourraut from Spain. But it was a close call: her nearest opponent was just 1.13 seconds slower than she was. She had hoped to take part in the Olympic tournaments of both 2012 and 2016 but was pipped to the post first by Jasmin Schornberg and then Melanie Pfeifer. She had previously said that just to compete in the Olympics at all was her greatest ambition, so to win gold proves the strength of her perseverance.

Malaika Mihambo will represent Germany in the women’s long jump this year – and pundits believe her first ever Olympic medal is likely to be a Gold. Her current personal best in long jump is 7.30 metres.

Not only is she an incredible athlete, but she also does charitable work inspiring and empowering young people to get into athletics. She herself began training in the long jump when she was just eight years old, and wants other talented young people to have the same opportunities. Millions of Germans are pinning their hopes on Florian Wellbrock to “make waves” in a number of swimming events this year. Photo: picture alliance/dpa | Michael Kappeler

Wellbrock qualified for the final in the men’s 800 metre freestyle on Thursday night after improving his personal record in the heats by around one and a half seconds. He came second in these heats only to Ukraine’s Mykhailo Romanchuk.

After an unsuccessful Olympic season in Rio in 2016, Wellbrock has been projected by some to win the Gold medal this year in both the men’s 1500 metre freestyle and the men’s marathon swimming categories. Many Germans will presumably be crossing their fingers that he will literally make some waves come Thursday’s competition.

Isabell Werth became the first rider ever to win seven equestrian Olympic gold medals after Germany won the Equestrian team dressage title on Tuesday, reported AFP. She has, to date, won six team titles and one individual gold title. She has won eleven medals overall, having competed in the Olympics six times in 1992, 1996, 2000, 2008, 2016 and 2020.

Not only is she a trailblazing rider, but she also enjoyed a brilliant academic career and initially started out in law before pursuing dressage full-time. Her teammates from the team dressage competition, Jessica von Bredow-Werndl and Dorothee Schneider, are equally distinguished riders. Schneider was also part of the team that won a gold medal in the same category in the 2016 Olympics.

The Dressage Individual Grand Prix Freestyle finals was set to take place on the 28th July. Werth is the resounding favourite to win a further Olympic gold medal, whilst her compatriot Jessica von Bredow-Werndl may also be in the running.