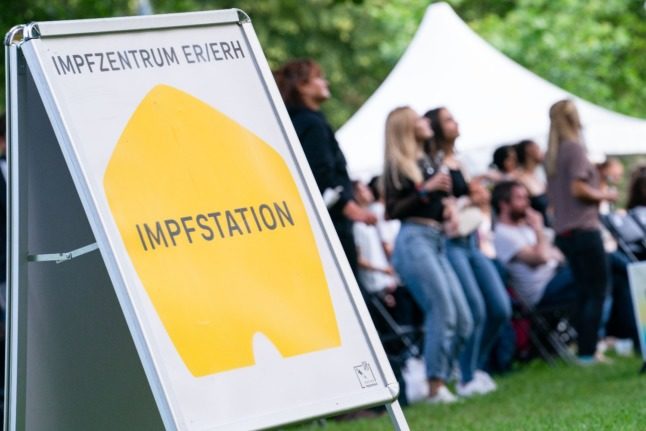 Unlike other European countries such as France and Greece, Germany has so far ruled out introducing compulsory jabs for certain parts of the population.

But Chancellor Angela Merkel’s chief of staff Helge Braun caused a storm at the weekend by suggesting that “vaccinated people will definitely have more freedom than unvaccinated people” if case numbers rise again in the autumn.

This could mean they are not allowed to access restaurants, sports venues or other facilities, for example – even if they can provide a recent negative test.

Government spokeswoman Ulrike Demmer has insisted that mandatory vaccines will not be introduced through so-called “back door” measures restricting the unvaccinated.

But she also said the government would do “everything to avoid a situation like the one we saw in spring” and said that in the event of further exponential virus growth, “we will have to take further measures”.

In a country scarred by memories of Nazi and communist dictatorships that spied on citizens and stole their freedoms, forced vaccination – even indirectly through restrictions on the unvaccinated – is a hard sell for many.

The country has only one mandatory vaccine – against measles in a measure that went into effect in 2020.

Armin Laschet, the head of Merkel’s conservative CDU party and the favourite to succeed her as chancellor after Germany’s election on September 26th, has said he does not believe in compulsory jabs — or in different treatment for those who are not vaccinated.

“In the end, I think freedoms have to apply to everyone if you don’t want compulsory vaccination,” he told the ZDF broadcaster.

But Der Spiegel magazine said Tuesday that the debate around vaccination could prove “extremely dangerous for Laschet”.

After a dismal start to the year, the conservatives have seen their ratings rise over the summer thanks to low infection numbers and a series of blunders by their closest rivals, the Greens.

But with cases rising again and barely 50 percent of the population fully vaccinated, “discussions about vaccination could poison the atmosphere” justas “the phase of the campaign begins”, Der Spiegel said.

Germany has seen low infection numbers over the summer compared to many of its European neighbours, but cases have been creeping up over the past two weeks, largely fuelled by the Delta variant.

Merkel said last week she was concerned about what she called an “exponential” rise in cases, urging as many Germans as possible to get vaccinated.

The Robert Koch Institute (RKI) health agency on Tuesday recorded 1,545 new infections in Germany over the past 24 hours and an incidence rate of 14.5 new cases per 100,000 people over the past seven days — up from a low of 4.9 in early July.

Meanwhile, the country’s vaccination drive has slowed to a snail’s pace, with just 49.7 percent of Germans fully vaccinated as of Tuesday — well under
the 85 percent deemed necessary by the RKI.

For the Süddeutsche Zeitung daily, politicians should have the “courage to say that compulsory vaccination could be a last resort in the fight against Covid”.

Even those opposed to compulsory jabs are increasingly coming out in favour of different treatment for those who choose to forego the jab.

Justice Minister Christine Lambrecht has suggested that unvaccinated people should be forced to pay for their own tests – an idea supported by influential Bavarian premier Markus Söder.

And the German Ethics Council, which advises the government on its vaccination strategy, has cautiously stated that mandatory jabs for specific professions could be considered under certain circumstances.

“However, I would say that these circumstances do not apply at all” at the moment, council president Alena Buyx told the ARD broadcaster, noting that vaccination rates among German health workers and teachers were high.

Jens Michow, executive president of the German events industry association (BDKV), told Die Welt newspaper that compulsory jabs for customers and staff were “the only way” to save the industry from ruin.