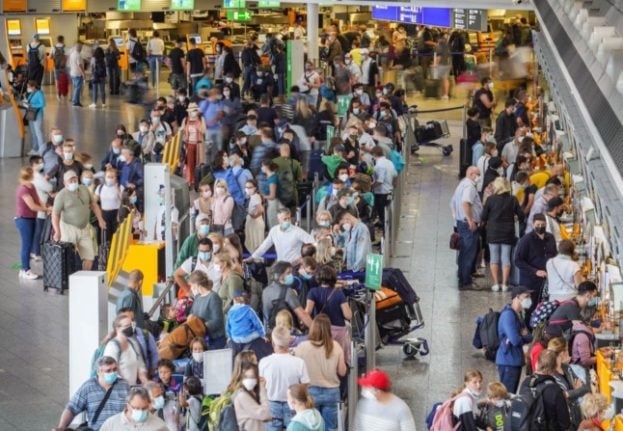 It came as Chancellor Angela Merkel’s cabinet extended entry regulations to Germany put in place to help control the spread of Covid-19 until at least mid-September.

Health Minister Jens Spahn said on Wednesday that the Covid travel rules will be in place until September 10th. They were set to expire at the end of July.

However, a change in quarantine rules will mean that soon fully vaccinated people entering from so-called ‘virus variant of concern’ zones, such as Brazil and South Africa, will not have to isolate for 14 days.

They will be able to end their quarantine early if they can prove that their vaccination protection is effective against the virus variant in the area they are travelling from.

No details have been given yet on how people will have to prove that – and how early they can shorten the quarantine period. The Local Germany will report on this when we have more information.

Travel is banned from countries classed by Germany as ‘virus variant areas of concern’. There are some exceptions, including for German citizens and residents – but currently everyone coming from these areas has to quarantine for 14 days with no option to shorten it.

That means that people will be able to end their 14-day quarantine period after five days with a negative test, and end it immediately if they can prove they are have either been vaccinated against, or recovered from, Covid.

The German government recently downgraded five countries, including the UK and Portugal, from virus variant areas to high incidence countries after the Delta variant became widespread in Germany.

The new quarantine rules will come into force after the old regulation expires on July 28th.

Spahn said it was necessary to extend the existing regulations after Germany saw a spike in cases after summer last year. “We learned from last summer that we have to pay attention, also when traveling,” he said.

Spahn also warned of a drastic increase in the 7-day incidence of Covid infections in Germany if the current development continues.

Spahn reiterated his message from previous weeks – that the situation in autumn depends on people’s behaviour now. He urged everyone to stick to basic restrictions like wearing a mask and keeping distance.

The 7-day incidence of Covid-19 infections has been rising continuously for over two weeks in Germany, and has recently slipped into double-digits. According to the Robert Koch Institute (RKI) on Wednesday morning, the 7-day incidence was 11.4, compared with 10.9 on Tuesday.

Though still at a low level, the incidence has more than doubled since its most recent low of 4.9 on July 6th.

Spahn said consultations would be held with states to determine at what point restrictions would be introduced if needed. The situation is different today compared to last year due to the high vaccination rate, he said.

The incidence has so far been the basis for many coronavirus restrictions in the pandemic. But in future, other factors ​​such as hospital admissions are to be taken into account more strongly.