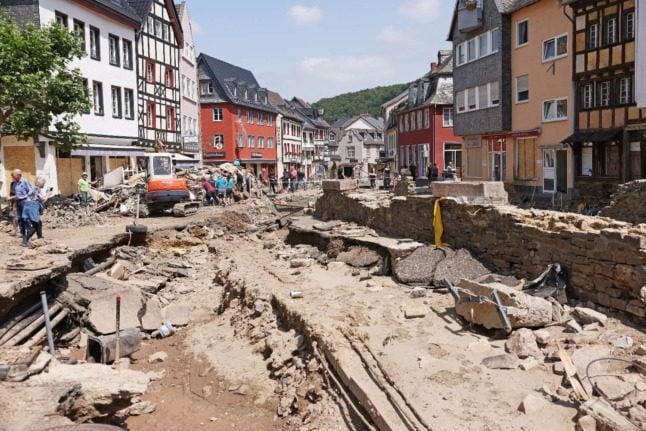 More than 160 people have died, hundreds are injured and towns and infrastructure has been destroyed in the flooding that hit western German regions last week.

As the clean-up and search for missing people continues, more people are asking what went wrong – and if authorities could have done more to warn people of the floods.

In an interview with the Sunday Times newspaper, British Professor of Hydrology Hannah Cloke called the German flood disaster “a monumental failure of the system” and blamed “breaks in the chain” of preparation.

Why does Germany not use text messages to warn people?

Local authorities in Germany use sirens, loudspeaker announcements or radio and TV bulletins to warn residents of acute danger or issue evacuation orders.

Warnings are also issued via apps like Nina or Katwarn on smartphones. But there appears to have been a breakdown in communication last week.

Some survivors told reporters on the ground that they didn’t see any official warnings, and instead were informed by family members, neighbours or friends.

Due to the flooding, however, some places were cut off from the outside world due to power failures, making it more difficult to warn people.

On Tuesday federal Transport Minister Andreas Scheuer told Bild that he wanted German politicians to implement a so-called cell broadcast system. This would see SMS alerts sent out to all mobile network users, either in a country or specific area in just a few seconds, in case of emergencies.

Germany has chosen not to base its widespread emergency alerts on this system, unlike other countries such as the Netherlands, Greece, Romania, Italy, or the USA.

Bild reported that Germany doesn’t have this system due to data protection concerns. Germany is known for having a sensitive approach when it comes to privacy.

Scheuer added: “Protection of the population is paramount: we have data protection, but we also need data accountability – especially for information for citizens.”

According to Bild, in Germany SMS warning messages can only be sent to recipients who have agreed to this beforehand.

However, there is an exception to this, reports Bild – the Covid pandemic. Mobile phone users, for instance, receive a text when they arrive in the country from abroad alerting them of the quarantine and travel rules in Germany.

So far, the introduction of warning messages being sent directly to everyone’s phone has failed due to data protection, Scheuer said.

“This catastrophe will for once bring home the reality to many in the political discussion,” said Scheuer. “We have the data, but we must now have the legal possibilities, the tools, that our institutions also reach the citizen with this information.”

The Local has asked the Transport Ministry for more clarification on Germany’s emergency alert system and why text messaging is not used widely.

The UK recently brought in a new emergency alert system to warn people about serious situations such as terror attacks, flooding or public health emergencies.