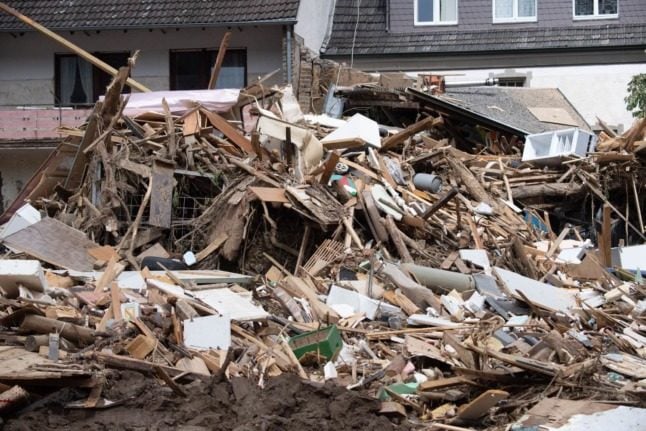 The clean-up and search for victims is continuing after the devastating storm disaster in western Germany that has resulted in more than 160 people losing their lives.

After continuous rainfall led to flash floods and rivers breaking their banks on Wednesday night, dozens of residents drowned in their homes before they were able to get to safety.

Regions in Rhineland-Palatinate and North Rhine-Westphalia (NRW) have been worst hit by the catastrophe. Other parts of western Europe, including Belgium, have also been affecting by the flooding.

Now the debate over what went wrong and what the country can do better is underway.

Forecasters had put parts of Germany on the highest possible alert last week for torrential rain and flash floods. But most people were caught off-guard by the rising waters that swept homes, roads and bridges away, signalling that there could have been a communication failure.

“For so many people to die in floods in Europe in 2021 represents a monumental failure of the system,” Hannah Cloke, a professor of hydrology who set up and now advises the European Flood Awareness System, told Politico.

She added: “Forecasters could see this heavy rain coming and issued alerts early in the week, and yet the warnings were not taken seriously enough and preparations were inadequate.”

Cloke said warnings and messages to evacuate or find in shelter on high ground did not get through to enough people.

Local areas in Germany are responsible for preparing protection, and warning citizens about possible weather dangers.

“There should not have been so many deaths from this event,” Dr Linda Speight, a hydrometeorologist at the University of Reading in Britain, told the New York Times. She also said poor communication about the high risk of flooding had probably contributed to the significant loss of life.

“People were still in their houses when the water came,” Speight said, adding: “and there was no need for that to happen.”

German Economy Minister Altmaier said in a Bild broadcast on Sunday evening that the country needs to clarify whether sufficient precautions were taken.

The SPD’s Lauterbach said Germany must “adjust and prepare for the fact that there will be more natural disasters in the future, and also regular pandemics”.

The infrastructure has to be created and expanded for this, he explained, adding: “Disaster management is of central importance here.”

Emergency situations such as the flood or forest fires are becoming more frequent and can break out in many places at the same time, she said.

“Help only works if everything comes together,” Baerbock said. “For this, there needs to be an authority that bundles all forces, that pulls together helicopters or special equipment from all over Germany or neighbouring EU countries as quickly as possible.”

Baerbock spoke out against centralisation of disaster control in Germany, but in extreme situations coordination has to become faster, she said.

“To this end, the Federal Office for Civil Protection and Disaster Assistance must be equipped with a central office function, as we know it in police work from the Federal Criminal Police Office.”

Furthermore, Baerbock called for “concrete risk and climate adaptation plans” for all municipalities. As examples, she cited the reconstruction of sewage systems or the digital monitoring of water levels in streams.

The focus is on providing emergency aid for people right now. But German authorities are trying to piece together the events that led to this catastrophe.

According to the North Rhine-Westphalia interior ministry, the extreme flooding did not come as a surprise.

Official warnings of severe thunderstorms had materialised last Monday at around 10.30am, Bild reported on Sunday, citing the ministry. All official warnings had been delivered to the control centres of the districts and the cities.

Due to the severe weather, a “state situation” was set up on Tuesday. This was intended to identify at an early stage whether local assistance was needed in an area.

The head of the Federal Office of Civil Protection and Disaster Assistance (BKK), Armin Schuster, said the warning system had worked – but that the weather in this case was too severe to predict.

“The German Weather Service (DWD) warned relatively well.” The problem, he said, is that it is often impossible to tell half an hour beforehand which place it will hit and with what amount of rain.

Warning apps were used to send out alerts to residents, he said. He couldn’t say where sirens went off in the flood areas affected.

What can be done in future?

“We should not take this extraordinary event as an opportunity to fundamentally question the system of disaster control or to call for a shift of operational powers from the districts and cities to the federal government,” Sager said.

“Against such lightning-fast forces of nature, humans are simply powerless after a certain point,” he said. “We should realise that and accept it.”

A big cleanup operation is underway in the areas affected by the floods. All these tractors and trucks belong to volunteers, people from all over the region who came here to help. They say authorities haven’t shown up and are not coordinating the operation #Hochwasserkatastrophe pic.twitter.com/LColTdJTrO

However, Sager did advocate improving warning alerts. “The existing technical possibilities are currently underused,” he said.

But Reul said: “Not everything has worked one hundred percent.” But according to his current knowledge, there had been “no major fundamental problems”.

Reul also spoke out in favour of improving the warning systems. For instance, he said, the question is how to reach those people who do not have a warning app.

According to the Rheinische Post, only 8.8 million users nationwide have installed the warning app called Nina from the Federal Office of Civil Protection and Disaster Assistance.

The focus in Germany will now be on how authorities can communicate the severity of weather alerts to residents.