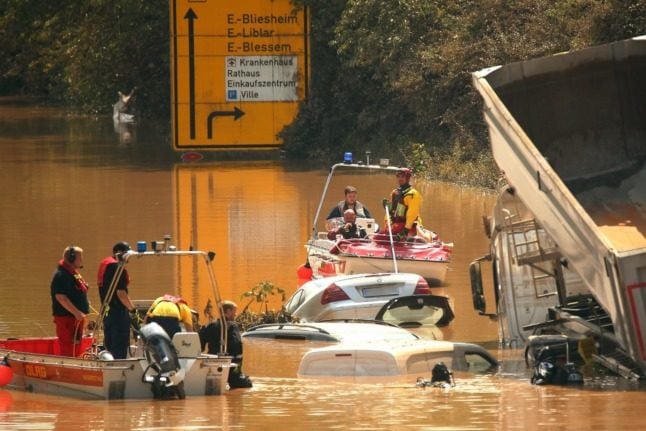 The German government has promised more than €400 million in aid for Rhineland-Palatinate and North Rhine-Westphalia – the two states hit hardest by the flooding catastrophe.

However, many volunteers and agencies are on the disaster scene right now and calling for cash donations.

Here’s a look at some of the agencies helping out flood victims:

The DRK provides huge support in emergencies, such as medical services, care, accommodation and food. You can donate to the flood victims via the DRK website. This can be done via bank transfer and via online payment services such as Paypal.

The DLRG is involved in water rescue. They have been at the scene in boats helping to sort through the wreckage. They request that people contact the three regional associations (North Rhine, Westphalia or Rhineland-Palatinate) to donate money. Donations to the respective accounts should be marked with the keyword “Hochwassereinsatz 2021” so it’s clear what the money is intended for. Further information can be found on the homepage.

The THW foundation helps out at the scene of disasters and civil protection. They have around 80,000 volunteers across Germany.

Malteser Germany has around 300 volunteers on flood relief missions, with hundreds more on standby.

“The operational situations in Rhineland-Palatinate and North Rhine-Westphalia are dramatic and still constantly changing.” said Malteser Help Service President Georg Khevenhüller. “The danger to the lives of residents affected by the floods and also to colleagues in the fire department, for example, are very high. We think especially of the relatives of the deceased in these hours.”

Chaplains are provided by this organisation amongst other support.

Aktion Deutschland Hilft has also set up a donation account for flood victims. It provides emergency aid to the people affected, helping families who have lost their homes.

Regional charity the Diakonie Wuppertal is asking for donations for all Wuppertal residents who have become victims of the floods.

When donating via bank transfer, the key word is “Hochwasser” (flood).

Donate to the districts

People can also contact the districts affected. The Federal Office of Civil Protection and Disaster Assistance has listed them on its homepage.

The state government in Rhineland-Palatinate has set up a donation account for those affected in the state. The details for bank transfer are:

“We are currently receiving numerous inquiries about how to support the people affected by the severe weather disaster in Rhineland-Palatinate. This shows that there is a real willingness to help among the population,” said state interior minister Roger Lewentz this weekend.

Should I donate items?

At the moment most of the larger charities are only asking for cash donations because they do not have the capacity to accept donations in kind – such as clothes or toiletries – at this time.

However, there are some local organisations, particularly on social media, that may be looking for clothes and toiletries.

How can I recognise a reputable organisation?

One indication of a reputable organisation is the seal of the German Central Institute for Social Issues (DZI). If an appeal for donations bears the logo, it is guaranteed that the organisation advertises clearly and objectively, operates economically and also verifiably shows how the donors’ money is used.

However smaller charities may not have this logo so it doesn’t necessarily mean they are not genuine.

If you are donating to groups found on social media that you are not previously aware of, try to check that the person’s profile is genuine and get some information about them before sending a payment. While the majority of offers of help are genuine, it’s possible that scammers will exploit the opportunity.

Links to support are at the end of thread 🧵

Should I go to the area to help?

No. Organisations and local authorities have also asked that people do not travel to the flood areas to help at the scene. There is a coordinated rescue response ongoing and there are still danger spots in some regions. 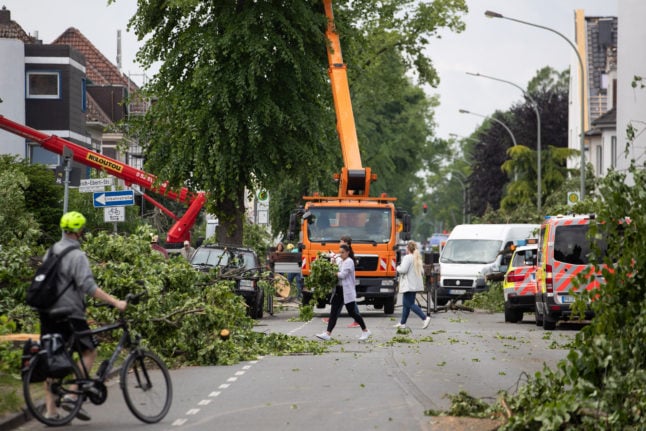 WEATHER
Western Germany hit by second round of severe storms

A severe weather warning was issued on Sunday by the German Weather Service (DWD), who cautioned residents in western and southwestern regions of the country that fierce gusts of wind, hailstones and heavy rain could once again be on the horizon.

A  second tornado could “not be ruled out” in the southwestern regions of the country, DWD warned.

North Rhine-Westphalia, Hesse and Rhineland-Palatinate, were struck by heavy rain and hailstorms and strong gusts of wind throughout the afternoon.

However, the worst of the thunder and hailstorms warnings were for the state of Baden-Württemberg.

Here, DWD issued a Stage 3 weather warning – the second highest possible. Severe thunderstorms with gale-force winds at speeds of up to 110km per hour were forecast, with up to 50 litres of rain per square metre falling in a short space of time.

According to the meteorologists, the storms are expected sweep across to the eastern regions of the country and ease off in the evening.

The storms and severe weather warnings came days after the city of Paderborn in North Rhine-Westphalia was hit by a devastating tornado.

According to the local fire brigade, 43 people were injured in the storm, with 13 of them needing to be hospitalised and one person reportedly fighting for their life.

Railway services were cancelled across many parts of the west over the weekend, but resumed again on Monday.

Air travel in some parts of the country was also affected, with Frankfurt Airport in the central state of Hesse saying there was disruption to flights on Friday.

Videos posted on social media depicted the strongest part of the tornado tearing through the city, ripping trees up by their roots.

The damage to infrastructure and buildings caused by the storm is estimated to be in the millions.

As of Monday, several schools and nurseries remained closed in both Paderborn and nearby Lippstadt due to fears that the buildings couldn’t be safely entered.

In the small town of Lippstadt alone, five nurseries and seven schools were closed for repairs on Monday, with administrators unable to say when they would reopen their doors.

“Given the extent of the damage we see at the various locations, it is currently unthinkable that classes can be held there in the next few days,” said Mayor Arne Moritz (CDU).

In Paderborn, meanwhile, drones were exploring five closed school buildings to check whether there was a risk of damaged roofs imploding. The streets where the schools are located have been closed off to the public and the police are believed to be patrolling outside to stop anyone entering. 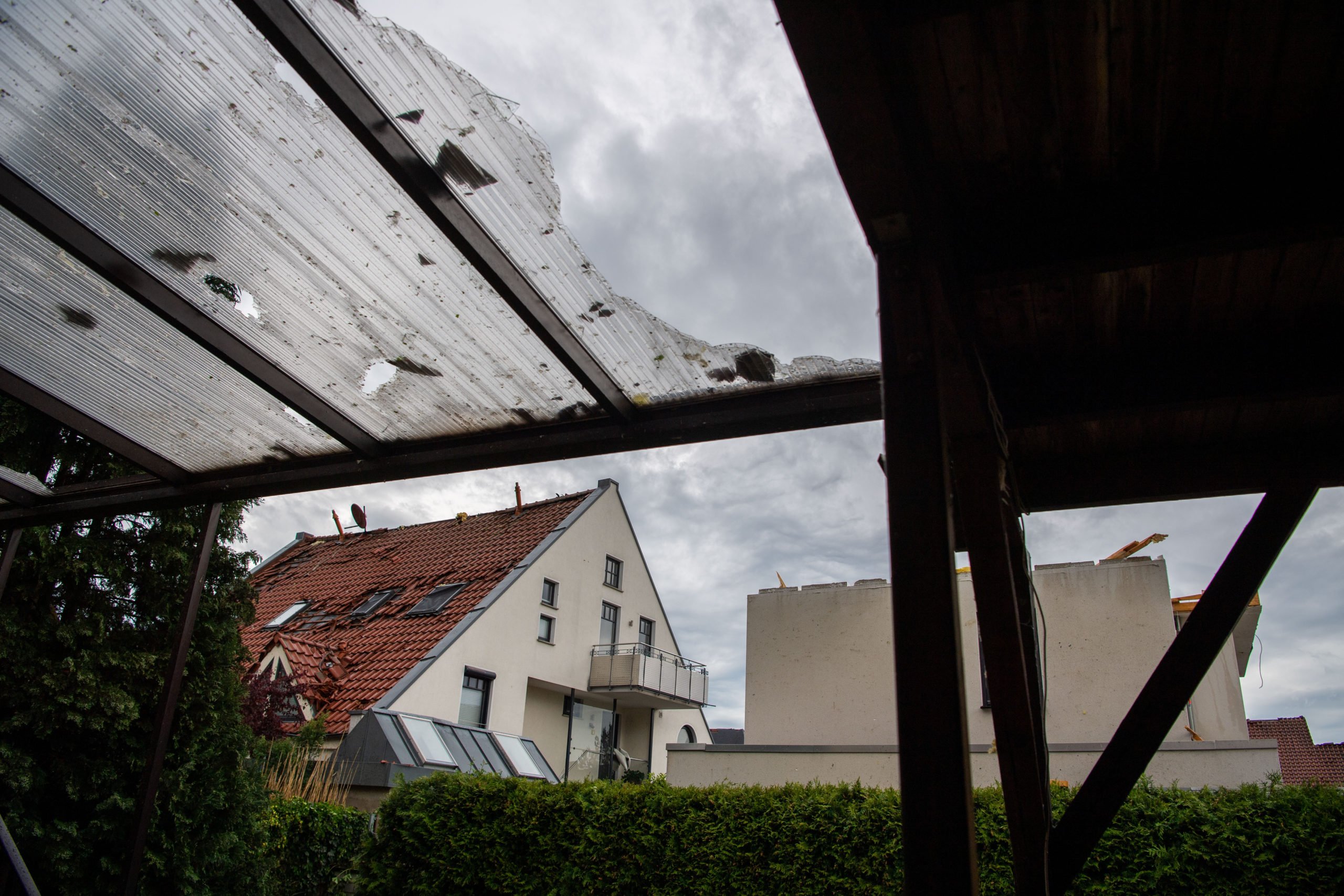 A damaged roof in the aftermath of the Paderborn storms. Photo: picture alliance/dpa | Lino Mirgeler

Tornadoes aren’t infrequent in Central Europe, but recently appear to be gaining in frequency and intensity, which experts suggest could be a result of climate change.

In June 2021, a deadly tornado swept through several villages in the Czech Republic near the Slovakian and Austrian borders, killing six people and injuring a further 200.

At time, climatologists pointed out that until 2020, the Czech Republic only saw a handful of tornadoes each year – and most of them were relatively mild.

“In Germany there are approximately between 20 and 40 tornadoes per year,” he told the regional media outlet. “We have to reckon with that. As the climate gets warmer and thunderstorms become more violent, the frequency of tornadoes will also increase.”

However, some experts have been more cautious about drawing a direct link.

“That simply cannot be determined at the moment,” meteorologist Jürgen Schmidt told RND.

Schmidt thinks the perception that tornadoes have increased in recent years could have a slightly more prosaic explanation.

The fact that people are able to record them on their smartphones and share these images more widely could contribute to this impression, he said.