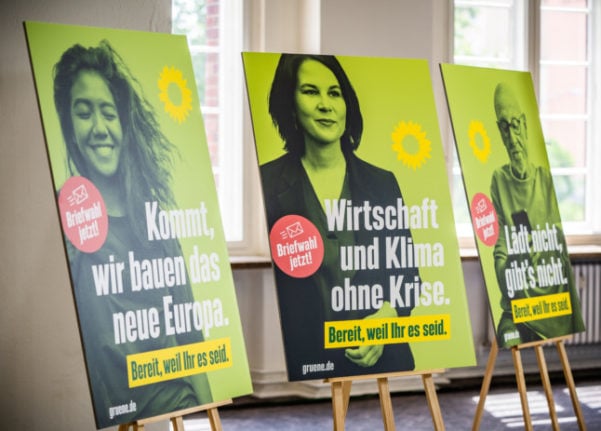 After a rocky few months in the polls, the Greens seemed keen to redirect attention away from chancellor candidate Annalena Baerbock and back towards their policies.

Following the almost unanimous election of co-leader Annalena Baerbock as the Green’s chancellor candidate in June, the party initially saw a massive surge in approval ratings – at one point, even moving ahead of Merkel’s Christian Democratic Union (CDU) party in the polls.

Since then, however, Baerbock’s image has been marred by accusations of misconduct, including failing to declare bonuses to the Bundestag and allegedly plagiarising sections of her campaign book, “Jetzt” (Now).

A campaign launch ‘with a hint of Baerbock’

As Tagesschau’s Sabine Henkel pointed out, though Baerbock has been featured on one or two campaign posters, she is no longer being referred to as the potential successor to Merkel.

“There isn’t a single poster showing her as a candidate for chancellor,” wrote Henkel. “Does that mean that the Greens are moving away from Baerbock – or do they want to take her out of the line of fire?”

When asked whether Baerbock could be replaced, party co-leader Robert Habeck said there was “no debate” about a possible switch of candidate.

Other Green Party activists, meanwhile, defended the decision to focus on policies over personalities.

I suppose this is a symbol of the political times?

With the Green’s campaign launch on Monday, the party is trying to win back support under the slogan ‘Bereit, weil ihr es seid’ (‘Ready because you are’).

Here are the key takeaways from the party’s election manifesto, from major investments in Green transport and digital infrastructure to a €12 minimum wage.

Though the coronavirus pandemic has taken centre-stage in recent months, recent studies show that the vast majority of German voters see the climate crisis as the country’s greatest future threat – and the issue continues to take centre stage in this election.

In their manifesto, the Greens have pledged to revise the current government’s climate targets up to ensure that the country produces at least 70 percent fewer emissions in 2030 than it did in 1990.

In May, Merkel’s CDU and their junior coalition partner, the Social Democratic Party (SPD), amended their emissions reduction targets under pressure from the EU. The government’s goal is to reduce carbon emissions by 65 percent by 2030, meaning the country could achieve climate neutrality by 2045.

To achieve their targets, the Greens want to implement an “immediate climate protection programme” that will “initiate effective measures in all business sectors, remove existing obstacles to the expansion of renewables, and implement obvious savings opportunities”.

In addition, the party are keen to use state income from the recently introduced CO2 levy to give German residents an annual ‘energy money’ allowance that they believe will incentivise more climate-friendly behaviour, while also making the CO2 price affordable for lower income people.

Since January 2021, a cost of €25 per tonne of CO2 has been added to climate-polluting products, with plans to increase the figure to €55 per tonne by 2025. The tax revenues from this would be given back to people as a stipend that could be used either to pay the CO2 price on products, or – if someone purchases fewer emissions-hungry products than the average German – enjoyed as a kind of ‘climate bonus’.

According to the Greens, people who are particularly affected by the CO2 price – such as those on social benefits – would receive additional financial support, such as “generous grants” for purchasing an electric car.

As well as their flagship climate policies, the Greens are putting wages and social security at the centre of their election manifesto with the promise of enhanced social security and a €12-an-hour minimum wage.

This is the same as the minimum wage proposed by the SPD in their 2021 election manifesto, and more than the current coalition government has promised: at present, the national minimum wage is set to rise to €10.45 an hour by July 2022. To deal with the digitalisation of the job market, the Greens also want to strengthen workers’ rights within the so-called ‘gig economy’, and prevent employees from Scheinselbständigkeit (fake self-employment), which employers may use to avoid make social security payments, for example.

The party has also pledged to introduce a “legal right to training and the strengthening of professional qualifications” to give people a better chance of finding a job.

Major investment in internet and eco-transport

If the Greens are elected this September, Germany will be in for an unprecedent wave of investment over the next 10 years, according to the party’s manifesto.

The Greens plan to spend an additional €50 billion a year on bridging the gaps in the country’s Wifi coverage, improving transport infrastructure with eco-friendly buses, new train routes and additional charging stations for electric cars.

They will also put money aside to support business sectors that have been particularly damaged by the corona crisis.

“This is how we create sustainable prosperity and secure the competitiveness of our country,” the party says.

“Every child has the right to good daycare centers and schools, no matter where they live,” said the Greens. “Our plans will create equal opportunities and cohesion in our diverse society.”

The Greens also want to combine the various forms of state child support into one lump sum for families, termed Basic Child Support. This would mean that every child receives a base amount, while lower-income families receive additional financial support known as GuaranteePlus.

READ ALSO: From Kindergeld to tax benefits: What changes for families in Germany in 2021

“The lower the family income, the higher the GuaranteePlus amount,” the Greens say. “After a one-off application at the time of birth, the amount of the basic child benefit is automatically calculated and paid out.