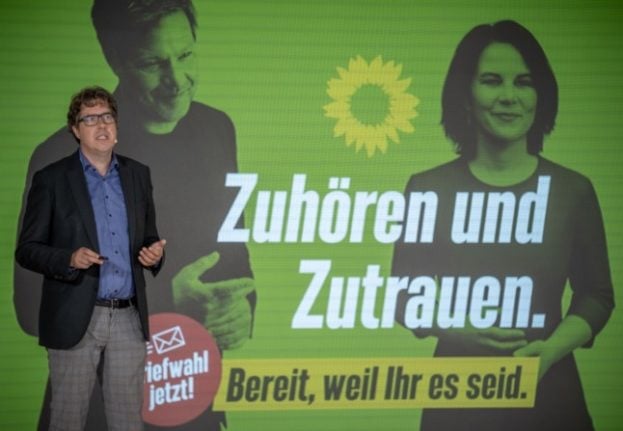 The ecologist outfit, since 2005 in the opposition, had enjoyed a surge in popularity after naming young hopeful Annalena Baerbock as its pick for chancellor, even overtaking Merkel’s CDU-CSU conservative bloc.

But a series of missteps by Baerbock including a plagiarism scandal have left the conservatives as firm favourites to emerge as the biggest party in the election – which will see Merkel bow out after 16 years in power.

“Are we making progress with climate protection or not? Are we reducing inequality in our society or not?… What is this election about?,” he said.

He unveiled posters, which will be displayed across Germany, featuring slogans such as “Economy and climate – without crisis” alongside images of Baerbock and party co-leader Robert Habeck, among others.

Asked why none of them featured the word “chancellor”, Kellner said the party would focus more on individual personalities when campaigning begins in earnest next month.

“We are strong together in our team and we have a strong duo for this election,” he said.

The party will be looking to win back support lost after Baerbock, 40, failed to declare bonuses to the Bundestag, put inaccuracies in her CV and allegedly plagiarised sections of her campaign book.

After the publication of Baerbock’s book “Jetzt” (Now) in June, an Austrian plagiarism expert wrote an explosive blog post claiming sections of the book were copied from the internet.

Baerbock and her supporters have called the accusations overblown and said the political treatise did not have to meet the same attribution standards as a scientific paper.

But the Greens’ ratings have continued to slide, with a poll for the Bild daily on Sunday showing them on just 17 percent – well behind the conservatives on 28 percent.

The former trampolinist has even faced rumours she will step aside in favour of Habeck, though Habeck himself dismissed that theory as “nonsense” in an interview with the daily Sueddeutsche Zeitung at the weekend.

“We have just elected Annalena as our candidate… with almost 100 percent” of the vote at a party congress, he said, insisting there was “no debate” about a possible switch.

Habeck himself embarked on an election tour of his home region of Schleswig-Holstein Monday, when he was to visit a wind turbine facility on the
island of Sylt.

The conservatives, meanwhile, have seen their ratings slowly improve after a dismal start to the year, especially since the nomination of their chancellor candidate Armin Laschet.

Baerbock had also been ahead of Laschet in surveys of which personality Germans would prefer to see as their next chancellor.

But a recent poll had the North Rhine-Westphalia state premier in front on 25 percent, with Baerbock behind on 19 percent.

With the environment shaping up to be a key issue on the campaign trail, Laschet on Sunday promised to speed up efforts for Germany to achieve its goal of becoming climate neutral by 2045.

“If we want fewer people to fly, we have to build railways faster, for example. Everything is going much too slowly,” he said.

He also called for greater international cooperation to tackle climate change, insisting that “without China, without Russia, without other major
players, it won’t work”.

But critics say Laschet’s current success in the polls has less to do with his platform and more to do with the flat-footed campaign of the Greens.

The CDU-CSU alliance “has Annalena Baerbock to thank for its comfortable position”, Der Spiegel magazine wrote on Saturday.

“At the moment it looks as though (Laschet) will almost become chancellor by default,” it said.

By Yannick PASQUET and Femke COLBORNE