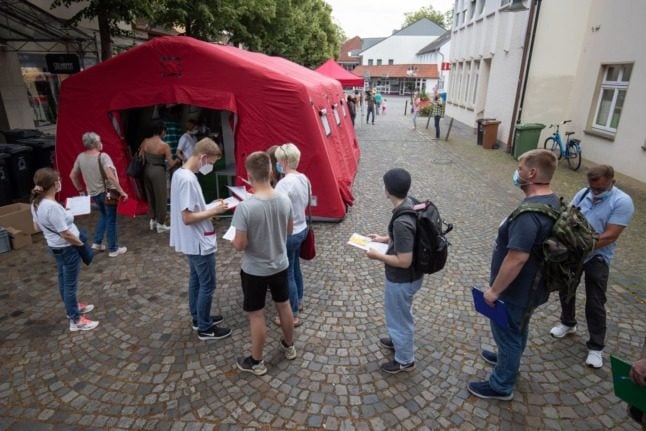 Campaigns are planned in car parks, at events, in community centres, churches and mosques – and even in job centres, according to state governments.

The aim is to provide uncomplicated vaccination opportunities to people, helping them avoid worrying about booking appointments.

Some states have already been thinking outside the box. Parts of Lower Saxony have been offering walk-in jabs at outdoor markets. In Berlin, neighbourhood clinics have been set up around the city on weekends since May.

Health experts and politicians have been calling for more creative solutions to get jabs into peoples’ arms.

“Where young people are, it must be possible for them to get vaccinated by mobile vaccination teams without any effort,” The Social Democrats’ Karl Lauterbach told broadcaster ZDF. Lauterbach suggested shisha bars and other nightlife spots as possible vaccine locations.

Over the past two weeks, the number of vaccinations per day in Germany has slowed down.

The latest figures show 57.6 percent of the population has had at least one jab, and 40.8 percent are fully vaccinated.

Here’s an overview of the ideas put forward by some states to boost vaccinations locally:

In BRANDENBURG, the health ministry wants to launch another vaccination campaign after the end of the summer holidays, targeting younger people for the first time. “We want a paradigm shift: the vaccine should come to the people, not the people to the vaccine, as has been the case so far,” ministry spokesman Dominik Lenz told DPA. The goal is to offer uncomplicated jabs. “Vaccinations in car parks, on the beach and at festivals, without an appointment,” said Lenz. Talks are being held with the districts.

READ ALSO: Bavaria opens up Covid vaccines to all adults in bid to speed up drive

In HAMBURG, mobile teams are to be deployed for campaigns, a spokesperson for the health authority said. From the end of July, vaccination offers are planned for up to 40,000 recipients of social benefits – appointments are to be made directly with the job centre like usual counselling appointments. The jabs will then also take place close to home at the usual job centre location. In parallel, vaccination services are planned in community centres and, in further steps, in schools, churches and mosques. The goal is to reach people who are willing to be vaccinated, but who have not yet initiated appointments themselves.

“Spontaneous” vaccination clinics such as those in market places are not currently planned in Hamburg, the spokesperson said, adding that the aim should be for a “dignified framework” and education to “ensure that the second vaccination is carried out”. The spokesperson also said that incentives are currently not planned.

In RHINELAND-PALATINATE, the use of vaccination buses is being considered so that people can get shots without registering, for example in market places or shopping streets. Meanwhile, the Federal Employment Agency and food banks are being consulted to see what’s possible. It is expected that from next week onwards, people will also be able to choose a vaccination centre. Until now, this was linked to the place of residence.

In SAXONY-ANHALT, districts are already advertising new campaigns, a spokeswoman for the social affairs ministry said – from jabs in the shopping centre to extended opening hours of vaccination centres – or vaccination days where no booked appointment is needed.

In BADEN-WÜRTTEMBERG, the social affairs ministry said with regard to the vaccination centres: “Those who haven’t looked for appointments lately now have good chances again.” Vaccination campaigns are also to come, for example in front of supermarkets or at other central and easily accessible locations, minister Manne Lucha (Greens) told the Stuttgarter Zeitung and the Stuttgarter Nachrichten.

In SCHLESWIG-HOLSTEIN, vaccination programmes are already offered at universities, among other places. Mobile teams are also working with harvest workers, according to a ministry spokesperson. There are also “neighbourhood vaccinations” in residential areas. At so-called open-house campaigns, people can also get their shots without an appointment at some vaccination centres. According to the ministry, jabs in pedestrian zones are not currently planned.

SAXONY is hosting a vaccination summit on July 20th. People in the state are already able to get vaccinated without an appointment from this month onwards. The head of the state chancellery, Oliver Schenk (CDU), says he wants to look at incentives to get people on board.

In NORTH RHINE-WESTPHALIA, 150,000 appointments are still available at the vaccination centres this week and 212,000 have been booked. according to health minister Karl-Josef Laumann (CDU). “This means that people have no problem at all booking a vaccination appointment,” he said. Next week, more than 300,000 appointments can be made. The situation is also easing for GPs and company doctors.