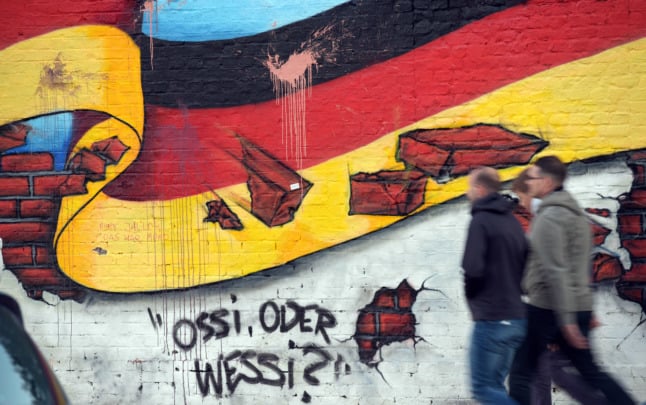 Archive photo shows a flag with graffiti that translates to 'easterner or westerner' in Berlin. Photo: picture alliance/dpa | Rainer Jensen

Germany’s five eastern states still lag behind western regions economically – but they are catching up, a new study on German unity has found.

However, the federal commissioner for eastern states has flagged up political differences in the east that he believes could endanger democracy.

According the annual study released on Wednesday, the economies of Brandenburg, Saxony, Mecklenburg-Western Pomerania, Saxony-Anhalt and Thuringia trail western states by 18 percent.

In total, economic output in eastern Germany is 77.9 percent of the level in western regions, according to the report which is based on 2020 data. Including Berlin, which used to be split into East and West, that number is 82.8 percent.

The report states that the gap between east and west is gradually closing.

“At the same time, however, the comparisons of figures make it clear that even more than 30 years after the fall of the Wall, there is still a clearly recognisable gap in economic power between east and west,” the authors of the report add.

Germany reunified in 1990, a year after the Berlin Wall fell.

READ ALSO: The East/West divide is diminishing but differences remain

In recent years, regional differences across eastern Germany have been increasing. Economic performance in the capital Berlin has caught up considerably in the past five years.

In 2020, Berlin even reached the German average for the first time, with 100.1 per cent of economic output – measured by the GDP per working hour per employed person.

This year Germany started phasing out the ‘solidarity surcharge’ – a contribution that everyone in Germany had to pay – which was meant to help rebuild eastern states and bring them up to the level of western regions.

Yet political attitudes – at least in a large minority of people – appear to be very different across East and West.

The federal government’s commissioner for former eastern states, Marco Wanderwitz, said he had observed a “deep and fundamental scepticism” towards politics and democracy in eastern Germany.

“Somehow, we have to convince people of the merits of democracy and the constitutional state.

“We have to find a way to escape this predicament of living in fear before every single east German state election, dreading the moment we will have to look at the results to see how many points the far left and far right have gained.”

Before presenting the annual report in Berlin, Wanderwitz, who was born in East Germany, emphasised the importance of listening to people.

He said the aim was to speak to people more in eastern states “in workshops and seminars”.

Wanderwitz said Germany needed to “listen to them properly and explain to them why certain things haven’t always worked out the way we wanted them to”.

He describes this as a laborious process.

“I’m under no illusions,” he said. “For a certain proportion of those who have come to hate democracy, it’s hard to imagine that this will make any difference to them.”

Wanderwitz recently stirred up some controversy with his statements about people who grew up in East Germany.

“We are dealing with people who have, in a way, been socialised by a form of dictatorship, so that even after 30 years they still don’t feel at home in a democracy,” Wanderwitz told the Germany daily newspaper FAZ in their podcast.

Some of the population, according to the politician, has “chronically undemocratic views”. These suggestions were met with heavy criticism.

But Wanderwitz refused to back down from his statements, reiterating that “we have a situation on our hands where many people in the east have a deep and fundamental scepticism towards politics and democracy”.

However, Wanderwitz said that the process of German reunification had made substantial strides forward.

“The process of economic recovery has been successful. We have made real progress in settling authorities and research institutions in the new federal states, and structural reforms in the lignite mining regions are on the right track too.

“A whole host of projects are already in the implementation phase.”