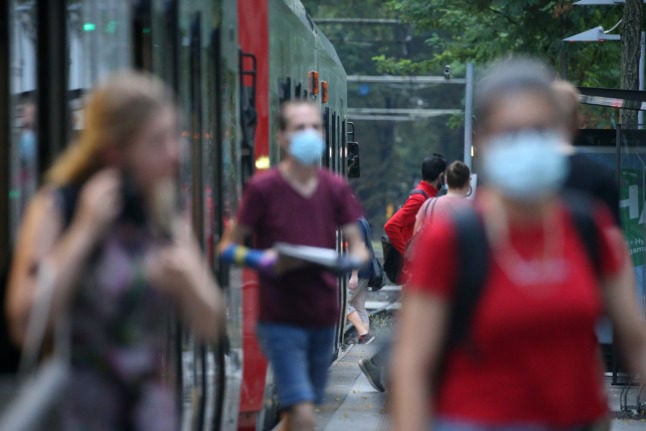 Passengers leave a train in Mecklenburg Western-Pomerania, where there are high fines for being a 'Maskenmuffel'. Photo: picture alliance/dpa | Oliver Berg

A ‘Maskenmuffel’ is someone who refuses to wear a mask in a public space with no real reason for doing so. The masculine noun is composed of ‘Masken’ (masks) and ‘Muffel’ (often translated as ‘grouch’).

The term arose at the start of the pandemic, as soon as people were required to wear face masks on public transport and in retail stores. If they refused to do so, they faced fines.

The term was listed by the Leibniz Institute for the German Language (IDS) among more than 1,000 other new words which have been coined in German during the pandemic, alongside the familiar ‘Covidiot’ and ‘Superspreader-Events’.

There are many different reasons why someone might become a ‘Maskenmuffel’. Some find masks uncomfortable and are not willing to tolerate this discomfort for the safety of others; some are concerned that a law forcing them to wear masks might facilitate further laws and dictates by the government which threaten their personal freedoms. What is important is that a ‘Maskenmuffel’ decides not to wear a mask, rather than having any real medical reason not to.

Some who fear a mask mandate also cite a number of other new fearmongering terms such as ‘Virokratie’ and ‘Plandemie’. The former is often used to refer to a dystopian form of autocratic or technocratic emergency government whereby personal and economic freedoms are restricted and democracy is suspended. The latter refers to a conspiracy theory which posits that the pandemic was either orchestrated or caused by one of a number of possible culprits (including Bill Gates, Black Lives Matter and 5G), or is entirely made up.

Therefore, the Maskenmuffel you see on your morning commute could actually be anyone from a dozy traveller who has forgotten to pack their mask in the morning, to someone suffering from Pandemiemüdigkeit (pandemic fatigue), to an outright Covid-denier who believes that masks are a mere means of authoritarian control.

Other related words include ‘Maskenpflicht’ – the introduction of compulsory mask-wearing – and ‘Maskenverweigerer’ – a more neutral synonym to describe those who refuse to wear masks.

In the city centre there is a fine of up to 150 Euros for people who refuse to wear masks.