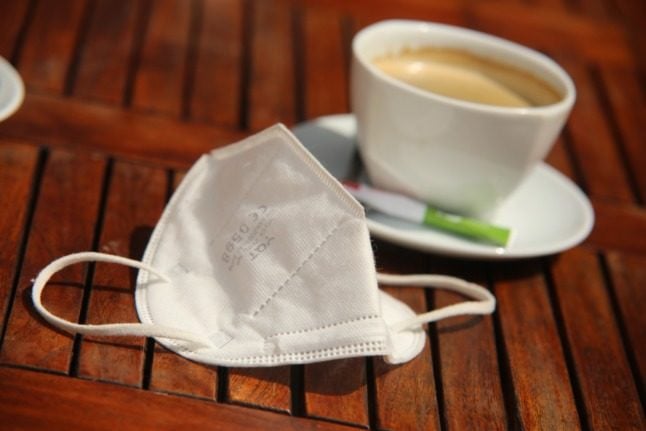 A total of 44.7 percent of people said they were in favour of wearing masks in future, the representative survey by the opinion research institute Civey on behalf of the Augsburger Allgemeine newspaper found.

And 41.9 percent of those surveyed said they wanted to permanently get rid of the covering over their mouth and nose. The remaining respondents said they were undecided.

Basic coronavirus measures such as wearing a mask, keeping your distance and frequent washing of hands have also significantly reduced the number of other diseases. A decline was particularly noticeable in infectious diseases, which, like the coronavirus, can be transmitted by droplets and aerosol particles.

According to data, last year there were only around a third of the norovirus cases that were seen in 2019 for instance.

Meanwhile, the flu season of 20/21 was almost completely cancelled – and it came to an early end in spring 2020. This has also already been attributed to the coronavirus measures.

READ ALSO: How people in Germany have embraced FFP2 masks

Who is in support of wearing a mask in Germany in future – and who isn’t?

Whether people will consider wearing a mask after the Covid pandemic also seems to depend on which party the respondents are close to.

Supporters of the far-right Alternative for Germany (AfD) and the liberals (FDP) want to largely do without the masks after the pandemic. Eight out of 10 AfD voters and around two-thirds of FDP voters said they weren’t in favour of using them in future, the survey found.

Voters of Germany’s Social Democrats (SPD) and Greens see it differently: a narrow majority (around 55 percent for both) want to continue covering their mouth and nose when, for example, the flu season is approaching.

Age also plays a role in whether people want to keep wearing masks after the pandemic. According to the Civey poll, 54.1 percent of people over 65 were in favor. For 18 to 29 year olds, however, a majority (50.5 percent) were against using the mask in everyday life in the future.

And there are also differences between the sexes: While 41.2 percent of men have a positive view of the mask even after the pandemic, the figure is higher – 48.2 percent – for women.

In contrast, 46.7 percent of men reject the mask after the pandemic – and only 37.3 percent of women take that view.

About 5,020 people were questioned for the survey from May 28th to June 1st.

It comes as parts of Germany are debating rules on mask wearing.

The city of Augsburg in Bavaria has decided that the obligation to wear masks outdoors will no longer be required from Wednesday June 2nd – except for weekly markets where distance cannot be maintained, authorities said.

Mandatory face masks were brought in across Germany in April last year. The rules were tightened to deal with the worsening Covid situation. For example, masks became mandatory in certain busy streets outdoors in many ares of Germany during the second wave.

Across the country, medical masks, such as the FFP2 models, which provide more protection than cloth masks, became compulsory on public transport and in shops in January 2021.

But masks are contentious. People protesting against Covid restrictions have continually flouted mask and distance rules during large and frequent demonstrations, leading to pushback from the police.

How do you feel about wearing a mask after the pandemic ends? Let us know by leaving a comment or emailing [email protected]