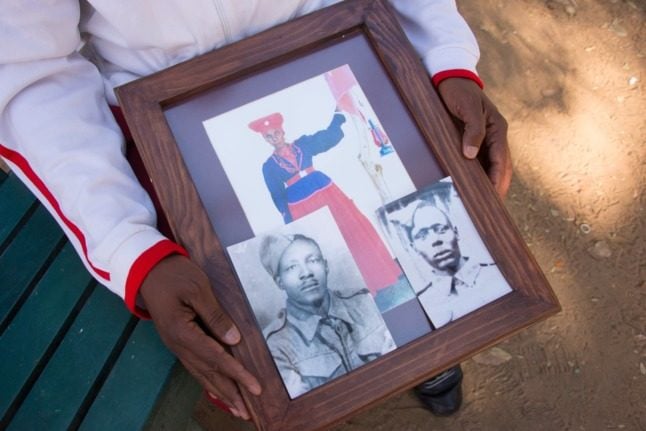 Archive photo from 2017 shows Uruanaani Scara Matundu, of the Herero community, showing photos of his ancestors. His family fled the genocide in the former colony of German South West Africa, now Namibia, to Botswana at the beginning of the 20th century. Photo: picture alliance/dpa | Gioia Forster

Germany ruled what was then called German South West Africa as a colony from 1884 to 1915.

Angered by German settlers stealing their women, land and cattle in their remote desert territory, the Herero tribe launched a revolt in January 1904.

Its warriors killed 123 German civilians over several days. The smaller Nama tribe joined the uprising in 1905.

The Germans responded ruthlessly, defeating the Herero in a decisive battle at Waterberg, northwest of the capital city of Windhoek, on August 11, 1904.

With German troops in pursuit, some 80,000 people fled towards Botswana, including women and children, across what is now called the Kalahari Desert – one of the most inhospitable environments on the planet. Only 15,000 survived.

In October 1904 German General Lothar von Trotha, under the direct command of Kaiser Wilhelm II in Berlin, signed a notorious “extermination order” against the Herero.

Survivors were sent to concentration camps, decades before those in which Jews, dissidents and gay people perished during the Nazi period.

From 40 percent at the start of the 20th century, the Herero now only make up seven percent of the Namibian population.

Hundreds of Herero and Nama were beheaded after their deaths and their skulls handed to researchers in Berlin for since-discredited “scientific” experiments framed to prove the racial superiority of whites over blacks.

In 1924 a German museum sold some of the bones to an American collector, who donated them to New York’s Museum of Natural History.

In 2008 Namibia’s ambassador in Berlin demanded that the bones be returned, saying it was a question of reclaiming “our dignity”.

Germany has since 2011 formally handed back dozens of the skulls, many of which were stored at universities and clinics.

Germany long refused to take the blame for the episode, only accepting responsibility on the 100th anniversary of the massacres in 2004, when a government minister said the “atrocities… would today be called genocide”.

The German government also repeatedly refused to pay reparations to descendants of the Nama and Herero victims.

Negotiations between the two countries to reach an agreement that combined an official apology and development aid began in 2015.

In 2018 Germany returned bones of members of the two tribes, with junior foreign minister Michelle Muentefering asking for “forgiveness from the bottom of my heart”.

On Friday, as it recognised it had committed genocide, Berlin also promised financial support worth more than one billion euros to aid projects in the African nation.

The sum will be paid over 30 years, according to sources close to the negotiations, and must primarily benefit the descendants of the Herero and Nama.