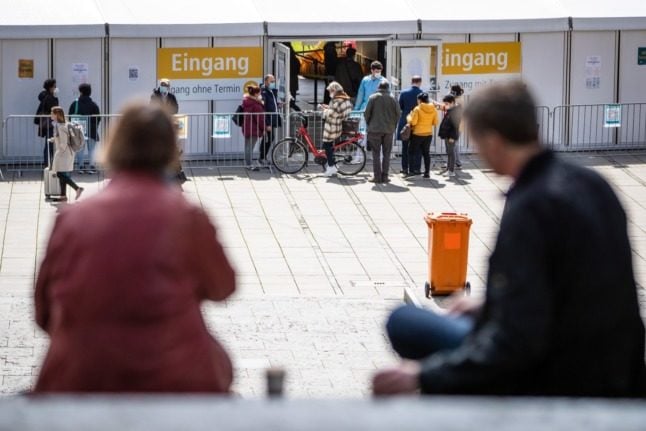 Government regulations mean that operators of coronavirus testing centres don’t have to provide proof of how many antigen tests they actually carry out on people in Germany to receive money from authorities, raising concerns over fraudulent activity.

That’s according to a joint investigation by regional broadcasters NDR and WDR and the Süddeutsche Zeitung newspaper.

Coronavirus testing centres, which have popped up across the country as they are often required for residents to access activities like outdoor dining, only have to inform the relevant doctors association of the number of people tested, without providing any proof.

READ ALSO: What you need to know about rapid Covid testing around Germany

That means the centre operators don’t have to provide details of the patients – or that they even bought antigen tests, the investigation found.

And test centres can go on to claim €18 per test from authorities.

Meanwhile, people who want to offer free tests usually need few prerequisites to do so, the report states.

For instance, an online course on swab collection is sufficient in many places, and then an application to open a test centre can be submitted to the health department. This is usually approved without difficulty.

Are some testing centres reporting too many tests to make money?

An overview of how much money has been spent on these tests is difficult to obtain currently.

Baden-Württemberg reported their costs at €62 million in April, and in Bavaria it was more than €120 million by mid-May. The money is distributed via the associations of statutory health insurance physicians, which in turn are reimbursed from tax revenues.

READ ALSO: Germans return to pools and beer gardens as some Covid curbs are lifted

The three media outlets reported on investigations in several North Rhine-Westphalian test centres. They compared the procedures there with an internal database of the state, in which the reports of the tests carried out are recorded. Journalists counted significantly fewer visitors in the test centres in each case than were subsequently reported to the state.

A spokesman for the Health Ministry told the three media outlets that while test centre operators do not have to submit data on the names of those tested or proof of purchase of the antigen tests to receive reimbursement, the do have to keep these records themselves until December 31st 2024.

That means a subsequent audit is also possible. The responsibility for this, he said, lies with the associations of statutory health insurance physicians.

Cases of test centers reporting more tests than were actually performed have “not come to the attention” of the Health Ministry to date. However, if there are indications of fraud, the Association of Statutory Health Insurance Physicians – or Kassenärztlichen Vereinigungen (KV) – could examine the cases.