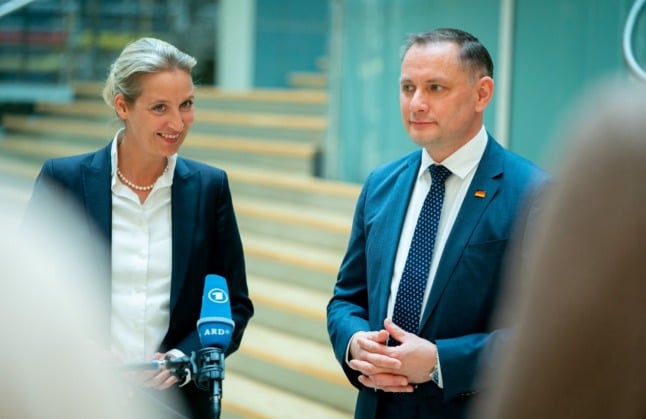 The anti-Islam, anti-immigration party has long been divided between a radical faction loyal to firebrand Björn Höcke and a moderate wing around party co-leader Joerg Meuthen.

The choice of Chrupalla and Weidel represents a victory for the more radical wing of the party, which is campaigning on a vow to end virus restrictions, take a tougher line on migration and pull Germany out of the EU.

At a party conference to firm up the AfD’s election manifesto in April, Chrupalla and Weidel backed radical policies including a complete ban on refugees being joined by family members.

At the congress in Dresden, the AfD also voted to reject compulsory mask-wearing, which it said was “based on numbers that are not meaningful”.

The AfD has long sought to capitalise on anger over virus measures in Germany, with members joining anti-vaxxers and “Querdenker” (Lateral Thinkers) at various demonstrations.

Starting out as an anti-euro outfit in 2013, the AfD capitalised on public anger over Merkel’s 2015 decision to allow in a wave of asylum seekers from conflict-torn countries such as Syria, Afghanistan and Iraq.

The party caused a sensation in Germany’s last election in 2017 when it secured almost 13 percent of the vote, entering parliament for the first time as the largest opposition party.

But it has lost support as Germany reels from the Covid-19 pandemic, and has lately been plagued by internal divisions and accusations of ties to neo-Nazi fringe groups.

The latest surveys have the party polling at between 10 and 12 percent, with Merkel’s CDU/CSU and the Greens neck-and-neck on around 25 percent. September’s election will be the first in 16 years not to feature Merkel, who is bowing out of politics.