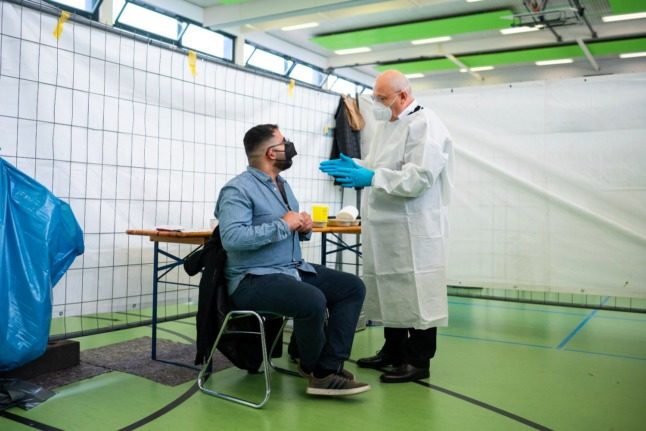 The move means anyone aged 16 and above will be eligible for a vaccine in Germany, scrapping the existing priority criteria based on age, jobs and pre-existing medical conditions.

READ ALSO: Germany to offer Covid jabs to all adults from June 7th

Spahn also said since the BioNTech/Pfizer is now approved for ages 16 and over, teenagers aged between 16 and 18 can be vaccinated from June 7th, only with this vaccine. Previously the vaccine offer was for everyone over 18.

Younger age groups will be eligible for a vaccine later in the summer when approval happens.

Does that mean everyone can get an appointment straight away?

Unfortunately, there could be long waiting lists. Spahn on Monday asked people to remain patient.

“That on June 7th, or even in the week of June 7th, everyone who wants to can be vaccinated, I expressly cannot say that,” the Christian Democrat (CDU) politician explained to broadcaster ARD.

Germany implemented the strict priority list, based on age, illness and occupation, at the start of the vaccination drive at the end of December 2020. The aim was to ensure vulnerable people, and those most exposed to the virus, could be vaccinated first.

From June 7th it will be dropped in doctor practices and regional vaccination centres.  In-house company doctors and private doctors are also to to be allowed to give out jabs from this date.

Several German states, including Berlin, Baden-Württemberg and Bavaria, have already gone ahead and scrapped their priority lists from this week, but only in GPs or through specialists – not vaccination centres. That has left doctor’s offices inundated with calls and emails from patients looking to get jabbed.

Germany already opened up AstraZeneca and Johnson & Johnson vaccines to all adults earlier this month.

Will there be enough vaccines to go round?

Germany – and other EU countries – were hit by vaccine shortages in the first quarter of the year. But more deliveries in April combined with GPs getting involved, ramped up the rollout considerably.

The head of the National Association of Statutory Health Insurance Physicians, Andreas Gassen, expects the federal government to ensure a significant boost in the supply of vaccines from June onwards.

“We assume that this is why Minister Spahn named the date from June 7th, as we can then probably expect a significant increase in deliveries,” Gassen told the Redaktionsnetzwerk Deutschland on Tuesday.

In principle, he welcomed the decision to lift the priority list.

“We think it’s good,” he said. “It makes the work of our colleagues in private practice easier. The basic prerequisite is, of course, that there are enough vaccines.”

In the last week of May, GPs in Germany are to receive doses from Johnson & Johnson for the first time. These have so far been reserved for communities such as the homeless, as well as community vaccination drives.

“The federal government will provide about 1.6 million doses from BioNTech/Pfizer, just over 500 000 doses from Johnson & Johnson and probably 600,000 from Astrazeneca for the week of 25th to 30th May,” the Association of Statutory Health Insurance Physicians (KVB) told the Rheinische Post on Tuesday.

The vaccine from Johnson & Johnson has the advantage that it only requires one dose.

In total, the federal government says Germany is expected to receive about 300 million doses if all possible vaccine candidates are approved to make sure everyone in the country who wants to be can be fully inoculated.

What does this mean for the vaccination centres?

Germany has around 420 centres dedicated to giving out coronavirus shots.

According to the Bundestag’s chairman of the health committee, Erwin Rüddel (CDU), the vaccination centres could be cut back when the priority list is lifted as they won’t be needed so much.

“The more people can be vaccinated in doctors’ offices without prioritisation, the vaccination centres can be cut back,” he told broadcaster SWR Aktuell Rheinland-Pfalz.

“We need them (centres) because not everyone has a family doctor. But I think we need more flexibility and more freedom of decision in the vaccination centres in combination with the practices, and the company doctors we then get great dynamics in the process.”

What do doctors think about it?

There are some concerns here. The German GP Association spoke of a major challenge for practice staff, who are already overrun with requests.

“With all understanding for the fact that everyone now wants to get to it as quickly as possible, I appeal to the patients: be patient!”, Chairman Ulrich Weigeldt told the Rheinische Post on Tuesday.

The chairman of the German Foundation for Patient Protection, Eugen Brysch, criticised that a date – such as June 7th – will determine the end of the ethical sequence for vaccination. Only vaccination progress in the three priority groups should be the yardstick, he said.

More than 70 percent of the over-60s in Germany have received at least one dose, while almost 25 percent have been fully vaccinated.

In total, more than 40 million vaccination doses have been administered in Germany – 37 percent of the population (30.8 million) have received at least one dose, and 11.2 percent (9.3 million) have been fully vaccinated.

What about plans to ease Covid restrictions?

Despite the ever-increasing vaccination numbers and falling infection rates, some experts are warnings against phasing out coronvirus restrictions in Germany too quickly.

Many rules have already been eased for fully vaccinated people and those who’ve recovered from Covid-19.

Regions are now beginning to reopen facilities after a more than six-month shutdown.

In many districts and cities – including Berlin – the incidence is stable below the threshold of 100, meaning that the emergency brake measures can be lifted.

“We are now experiencing a chaotic stumbling out of the restrictions,” Green Party health politician Janosch Dahmen told the Redaktionsnetzwerk Deutschland.

“This patchwork also undermines the high discipline that people have shown so far,” he said.

He that the federal and state governments will “finally have to agree on a uniform risk level plan also for incidences below 100. “We are nowhere near out of the woods.”

“All state premiers are aware of their high responsibility,” he said. “None of us will lightly or rashly make further relaxations. It’s not about a ‘race of relaxations’, but about a well thought-out way of responsibly getting out of the pandemic without risking another setback.”