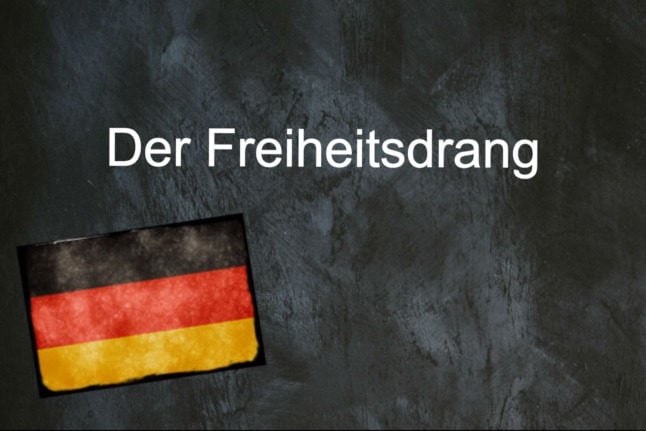 It’s easy to feel locked in amid a lockdown. After six months of strict and ever-changing Covid regulations, a lot of us are yearning for a change.

Some may even be experiencing the feeling of “Freiheitsdrang”.

This emphatic German word means as much as “a desire for freedom” and is made up of the nouns “Freiheit” (freedom) and “Drang” (urge, drive, desire).

It describes an urge to break free from restriction – whether that’s from a year of Covid-induced home office, or a more personal situation like a stagnating relationship.

The word often also implies a wish for independence. For example, a young adult might experience a “Freiheitsdrang” that prompts them to leave their family home, and start a life of their own.

In day-to-day use, it’s more common to hear the word describe political and historical context. You might see it used about groups of demonstrators challenging their oppressive governments:

(History has shown that no wall and no amount of barbed wire can stop the human desire for freedom.)

It’s unclear when exactly the word was coined. “Freiheit” is a very old German noun with its origins in the Germanic “frī-halsa”, which means “someone who owns their own neck”.

Drang comes from the middle high German “dranc”. In the 12th century, “dranc” turned into the verb “dringen”, which now means “to urge”, but back then referred to the chaos that happens during a battle.

The word has kept some of its violence: “Drang” is often translated as an “uncontrollable or overwhelming desire”.

Luckily, with coronavirus incidence figures finally starting to drop, it might not be much longer before we can fulfil our Freiheitsdrang.

He was overcome by a desire for freedom and resigned the same day.

Eventually it was the population’s desire for freedom that kickstarted the revolution.