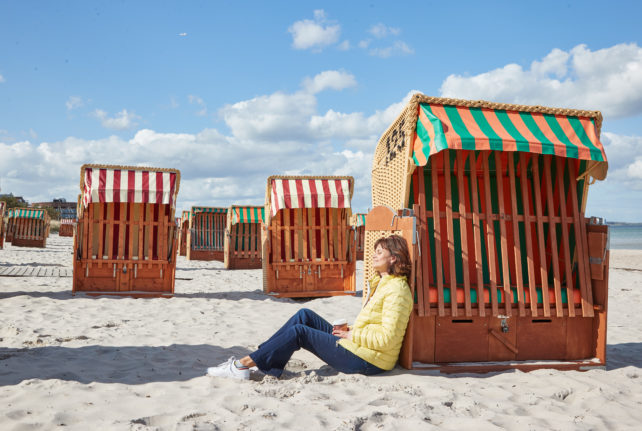 A woman at the beach in Kiel on Thursday. Tourism could soon become much more accessible to those with the vaccine. Photo: picture alliance/dpa | Georg Wendt

A total of 40 percent of respondents from an ARD-Deutschlandtrend survey said they thought it was “fundamentally wrong” for those who are fully vaccinated or have already recovered from a coronavirus infection to be exempt from restrictions such as social gathering rules and curfews.

From a first glance, it also appeared that the majority (55 percent) were in favour of easing curbs for vaccinated people. Yet this group disagreed on the timing – with the majority feeling it was too soon to allow special privileges for those who had gotten the vaccine.

A full 51 percent of the 1,351 respondents percent felt that that extra freedoms should only be granted when more German residents have had the chance to receive their jabs in the first place.

Currently German states are vaccinating either priority group two or three, the latter which includes people over 60 and or with certain pre-existing medical conditions.

However on Thursday Germany announced that it states can open up vaccines with disputed manufacturer AstraZeneca to anyone in the country who wanted one, regardless of if they are on a priority list or not.

As of May 6th about 31.5 percent of the population had received at least one jab, and 8.8 percent had been fully inoculated.

Meanwhile, a Civey survey from Tuesday showed similar results: 45 percent of people thought that vaccine privileges should only apply when everyone has received a chance to be vaccinated.

In a March survey The Local conducted, many readers were also on edge about a ‘vaccine passport’ to guarantee more freedoms – especially when many younger people are still waiting in line for their jabs.

READ ALSO: ‘The only way forward’: Should Germany introduce a Covid-19 immunity passport?

‘Chancellor should announce timeline back to normality’

German politicians were also deeply divided about loosening restrictions for people who had already received their shots, or previously had the virus.

Free Democratic (FDP) general secretary Volker Wissing told Bild daily on Friday that curbs should be generally lifted – with a specific date – rather than waiting for more people to receive the vaccine.

“We are vaccinating our freedom back! It would do our society good if the chancellor now quickly names a date from when we can have our normal lives again – like in the US and the UK,” he said.

Yet Social Democratic (SPD) health expert Karl Lauterbach, who expects the virus incidence rate to fall exponentially in a few weeks, appealed to all Germans to live with the restrictions until the end of May.

“We’ve held out for a year and four months. Don’t we want to hold out for these three more weeks and then have the full enjoyment?” he said Thursday evening on the ZDF program Maybrit Illner.

This last stretch of moderation is also important for those “who can not yet receive a vaccine.”

The national chairman of the German GP association, Ulrich Weigeldt, appealed to people in Germany to get vaccinated with AstraZeneca also out of global responsibility.

While in India or Brazil severely ill people are collapsing on the way to the clinic, or completely unable to get a vaccine, “in Germany we are engaged in a sometimes absurd debate about whether strictly tested, already approved vaccines are really good enough for us,” Weigeldt told the news portal T-online.

“We have to vaccinate. Everything that’s there, to everyone who wants it. Now.”

A step in the right direction – in die richtige Richtung gehen