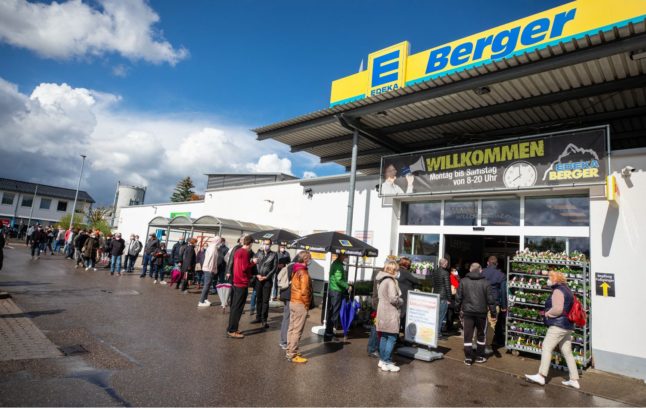 People queuing for the AstraZeneca vaccine at a supermarket in Pforzheim, Baden-Württemberg after a doctor set up a mobile surgery there. Photo: picture alliance/dpa | Christoph Schmidt

Some states, including Berlin, Bavaria, Mecklenburg-Western Pomerania and Saxony, have already been allowing everyone over the age of 18 to apply for an AstraZeneca jab.

Spahn pushed for all 16 states to allow residents to get this vaccine if they want it. This is a move away from the strict priority list which shows who is allowed to book an appointment first.

The order is based on recommendations by the STIKO vaccination committee and focuses mainly on age, health conditions and jobs.

Officially, Germany recommends that only over 60s receive this vaccine due to risks connected with very rare blood clot conditions.

However, adults of any age can request the vaccine and be given it after a detailed consultation with a doctor.

Spahn told broadcaster WDR on Wednesday that he planned to talk to state health ministers about opening the vaccine to all adults.

He confirmed later on Thursday that the priority list would be dropped for AstraZeneca, meaning it can be offered to all adults in doctor’ practices and vaccination centres across Germany.

He also said the interval between the first and second vaccination with AstraZeneca – currently 12 weeks – should be handled more flexibly.

States that recently moved to release AstraZeneca to all did so in a bid to avoid doses going to waste. Throughout the vaccination campaign in Germany, reports have emerged of AstraZeneca doses being left unused due in part to people having reservations about receiving it.

On the other hand, there are many younger people who want to be vaccinated with it – but it is not yet their turn because they are not in a priority group.

EXPLAINED: Can I get the AstraZeneca vaccine if I’m not on a priority list?

So far, 30.6 percent of the population has received at least one vaccine dose, and 8.6 percent are fully inoculated.

Germany plans to allow all adults to book an appointment for a jab in June. All adults should be offered a vaccine by September 21st, authorities say.

Covid restrictions set to be eased for the vaccinated

The Bundestag on Thursday passed new regulations put forward by the German government which will see Covid restrictions eased for fully vaccinated people, and those who’ve recovered from Covid-19.

It means that contact restrictions and rules like curfews would no longer apply to people who have had both jabs, and for those who’ve had Covid-19. These groups would also not need a negative Covid test to go shopping or to the hairdresser.

There are calls for further relaxations for people who test negative for Covid-19, for example with regard to contact restrictions.

“Many people have not yet been able to get vaccinated because of a lack of vaccines,” Helmut Dedy, Chief Executive of the German Association of Cities and Towns, told the Funke Media Group newspapers.

In Germany, people who have been tested can do things like visit non-essential shops or cultural institutions. However, because there can be errors, negative rapid tests give far less security against virus transmission than full vaccination protection, experts say.

Germany, together with the EU, wants to introduce a digital coronavirus vaccination pass before the end of June. For those who have already been fully vaccinated, that status is to be transferred from the analogue vaccination certificate. It is hoped that this will help avoid forged vaccination cards.