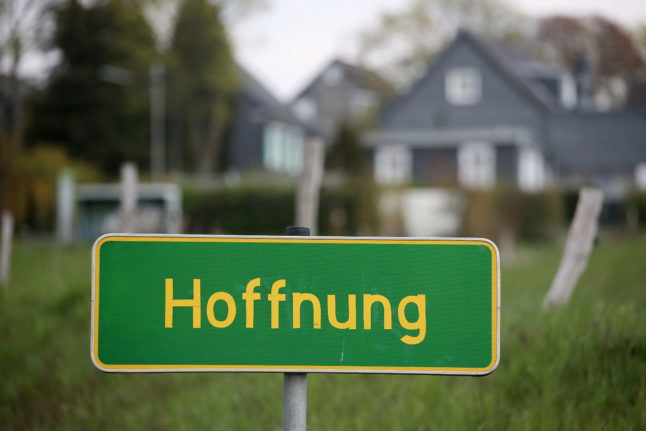 A sign for the city of Hoffnung (Hope) on May 2nd in North Rhine-Westphalia, where numbers have also sunken recently. Photo: picture alliance/dpa | Oliver Berg

When exactly the third wave of coronavirus cases peaked in Germany is hard to tell. Delayed reporting over Easter muddied the picture considerably.

What we know though is that the steep rise in cases reported to the Robert Koch Institute (RKI) came to an abrupt halt on April 15th when the 7-day incidence hit a level of 172 cases per 100,000 inhabitants.

After that it flatlined for 13 days, peaking at 177 on April 27th before falling back steadily to its current level of 133.

These numbers are considerably lower than the forecasts published by modellers. The RKI predicted a 7-day incidence of 350 by mid-April, while a team at the Technical University in Berlin predicted an alarmingly high incidence of 2,000 in May.

So what has happened to make the third wave less severe than expected?

Experts say that there are a few possible factors contributing to falling cases, such as people staying at home over Easter, greater caution among the general public, sharpened lockdown measures as part of the nationwide ’emergency brake’… and the weather.

According to the Süddeutsche Zeitung (SZ), one major factor behind the initial slowdown in the level of infection was the Easter holiday, when children stopped going to school.

Infections have been particularly high among school aged children and their parents’ generation. As schools were closed children could not take the virus into school and inadvertently spread it.

Mobility data published by the RKI shows that movement declined sharply over the Easter break, indicating that lots of people stayed at home during the four-day weekend at the start of April. This could have had an important impact in pausing the spread of the virus.

But mobility increased again after Easter and case started to rise again… so there are likely to be other factors at play.

Advocates of lockdowns say that these have been the most significant factor in breaking through the third wave.

Karl Lauterbach, SPD health spokesperson and a leading advocate of strict lockdown measures, said on Twitter that “without an emergency brake, there would have been openings [of shops, restaurants etc] during rising case numbers. That didn’t happen. Curfews also reduced contacts.”

Lauterbach also said that although vaccinations are helping to prevent severe courses of infections in the elderly population, the impact of vaccines on the general situation won’t be felt until more people get the jab.

He said: “The current corona numbers are so far due to the functioning emergency brake and not to the vaccinations.

Gernot Marx, head of the German Interdisciplinary Association for Intensive and Emergency Medicine (DIVI), said this week that a recent improvement in the situation on intensive care stations is “immediately connected to the national emergency brake” which came into force on April 24th.

These comments have caused some controversy as they contradict a statement he made in January when he said that it would take two to three weeks before the effects of a national lockdown would be seen on intensive care wards.

However, some German states began introducing emergency brake measures before the nationwide rule came into place.

According to the newspaper Bild, the number of new Covid cases being dealt with on Germany’s intensive care stations had already started to slow down by mid to late March, indicating that the worst of the third wave was already over by Easter.

This slow down could have had something to do with the local lockdowns that some states were implementing by late March.

Hamburg for instance introduced a strict curfew on March 19th.

Whether that really worked for the Hanseatic city isn’t so clear though. Its current 7-day incidence of 101 is not significantly lower though than that of Berlin (104) which largely resisted tougher measures until the national emergency brake came into force at the end of April.

However, Hamburg did get numbers down faster in the first place.

READ ALSO: Is Hamburg proof that an ’emergency brake’ can get Covid-19 cases down?

Greater caution among the public

Another likely explanation for the slowing of the spread of the virus is greater caution among the public, who heeded the message that the third wave was leading to strain on intensive care wards.

Hans-Georg Kräusslich, head of virology at Heidelberg University Hospital, told the SZ that “people’s personal reactions should not be underestimated”.

“Fortunately, the majority of people still believe that coronavirus is a threat,” he added.

Mobility data is a good indicator of how much personal contact people have had in recent weeks. Here though the data is also not completely clear.

In Hamburg mobility dropped significantly and the spread of the virus also dropped. But in Brandenburg, where there has been no significant drop in mobility, the level of infection has also dropped back.

Noticeable in the data is the fact that the steep decline in the third wave is happening more or less at the same time of year as when the first wave in the spring of 2020 also went into retreat.

The first wave in Germany peaked on April 2nd, before declining steadily throughout that month.

The peak of the third wave came at the end of April. So can we expect an improvement in the weather to play a role.

“We expect that seasonality will have an effect of about 20 percent on the R-value (reproductive number),” physicist Viola Priesemann told the SZ. “We should see this effect at the moment or soon.”

Jan Fuhrmann of Forschungszentrum Jülich agrees. he told RND newspapers: “The weather is likely to contribute in that, for example, private meetings can increasingly be moved outdoors and people are less likely to refrain from ventilating indoors because outside temperatures are too low.”

Other experts caution against putting too much emphasis on seasonality.

Epidemiologist Hajo Zeeb told broadcaster ZDF that there will be a “certain seasonality” before adding that “this could be made irrelevant by the high infectiousness of the virus variants”.

Criticism of the modelling

Another important aspect that needs to be considered is the simple fact that a lot of experts have not been terribly accurate in their past predictions of what will happen next.

Olaf Gersemann, who writes the daily coronavirus update for Die Welt newspaper, recently criticised many of the experts who are asked for answers to the question of why cases are currently rising or falling.

Showing that the main forecast published by the RKI and other research centres failed to pick up the recent turn around, he asked: “who needs forecasts that only perform well if existing trends simply continue? Gut feelings or the wisdom of Uncle Egon are just as good.”

In other words, in a time of crisis it is understandable that the general public wants answers from scientists to the most pressing questions of the day – that doesn’t mean scientists are always capable of providing accurate answers.