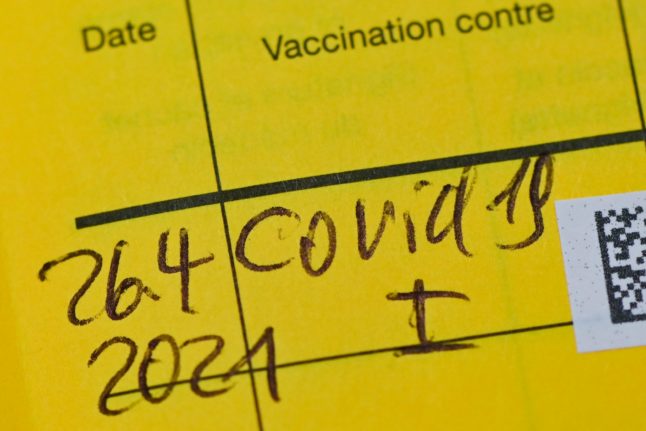 A vaccination card in Cologne shows one shot of a Covid-19 vaccine has been given. Photo: DPA

Merkel held a vaccine summit with Germany’s 16 state leaders on Monday to discuss whether fully inoculated people in Germany, and those who have had Covid-19 and recovered, should get more freedoms.

The Chancellor said that people who have received both jabs should “obviously” be allowed to get a haircut or go into a shop without having to show a negative coronavirus test as is currently the case for everyone in areas with high Covid-rates.

She also said that they would be exempt from rules like quarantining after close contact with an infected person.

The same would apply to people who can prove they have recovered from a coronavirus infection, for instance by showing a positive PCR test that is at least 28 days old.

Does this happen right away?

Merkel said that the government will prepare a decree setting out its proposals and present them to the Bundestag and the Bundesrat, which represents the 16 states. She didn’t give a timescale on this plan.

Later on Monday, however, Health Minister Jens Spahn told broadcaster ARD that there was a firm timetable.

The CDU politician said the government is to decide by the end of May to what extent vaccinated people and recovered Covid patients will continue to be subject to strict rules, such as rapid testing, curfews and contact restrictions.

“The federal government will make a proposal for this next week and the Bundesrat will then make a final decision on May 28th. So, there is a schedule,” he said.

However, later on Tuesday it emerged that several states, including Bavaria, Berlin and Hesse, will be easing the rules for vaccinated people, such as getting rid of the obligation to present a negative Covid test before visiting non-essential shops and hairdressers.

Up to April 26th about 23.9 percent of the population had received at least one vaccine dose. About 7.3 percent have been fully inoculated.

After the summit, representatives of towns and districts slammed the postponement of the decision on the rights of vaccinated people.

“It is regrettable that no final agreement was reached with the federal Chancellor about the lifting of the restrictions on fundamental rights for fully vaccinated citizens at the conference of state premiers,” said Gerd Landsberg, head of the Association of Towns and Municipalities.

Landsberg emphasised that it was not a question of granting special rights or privileges, “but of repealing unjustified encroachments on fundamental rights”.

One expects “a quick agreement in the Bundestag and Bundesrat and a clear legal regulation as to when which fundamental rights restrictions are lifted,” he told the Rheinische Post. “This applies in particular with a view to curfews and contact restrictions.”

District council president Reinhard Sager told  Funke media group newspapers that it is right to allow those who have been inoculated or have recovered from Covid to carry out activities without having to show a negative rapid Covid test.

He said that allowing this quickly would provide a way forward, particularly for the retail trade and the hospitality industry.

The majority of people in Germany are in favour of relaxing Covid restrictions for people who are inoculated, according to a new poll.

In a survey by the opinion research institute YouGov, 56 percent of respondents said they were in favour of giving fully vaccinated people in Germany more freedom again.

In contrast, 36 percent were “rather” or “completely” opposed to this. And 8 percent made no statement. For the representative survey, 1,138 people in Germany aged 18 and over were interviewed on April 26th.

Merkel said the move to give those with Covid immunity back some of their basic rights comes after the country’s Robert Koch Institute (RKI) for infectious diseases recently found that fully vaccinated people and those who have recovered, “no longer pose a relevant infection danger”.

She added that Germany faced a “difficult transition phase” as a growing number of people get their shots and will be desperate for more freedoms, while a significant part of the population will still be living with tough restrictions.

Although it was important to give people back their basic rights “as soon as possible”, she said, “we will have to live with the virus for a long while to come”.

Under the proposed relaxations, people with Covid immunity would no longer have to show a recent negative coronavirus test to enter certain shops, get a haircut or attend certain events.

On Monday Merkel also confirmed that Germany will lift the priority order for vaccines in June, meaning that all adults will be offered a Covid vaccine.