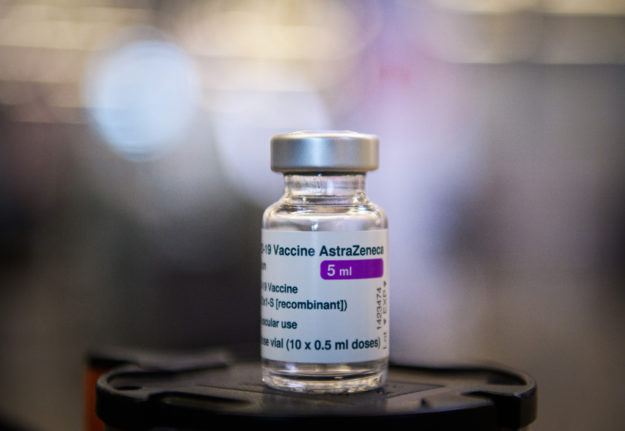 An AstraZeneca vaccine on display at Berlin's former Tegel airport, which now serves as a vaccine centre. Photo: DPA

The European Commission is considering a lawsuit against the Swedish-British pharmaceutical giant for so far delivering just 31 million of the 120 million doses it had promised, according to EU diplomats.

Asked if he thought the lawsuit was a good idea, Spahn said: “If (the commission) decides to take legal action, then yes… but it’s much more important to me that I get this vaccine.”

Germany wants to “cooperate with AstraZeneca to get as many deliveries as possible as quickly as possible”, he said, adding that legal issues are “not yet a priority in this phase of the pandemic”.

EU diplomats said Thursday no final decision has been taken on legal action but the EU executive has informed member state envoys and wants them to confirm whether they would back a lawsuit.

“As you know, AstraZeneca is not delivering the number of doses which have been agreed upon in the contract… This is one of the reasons why we keep our options open together with member states to take any further steps,” commission spokesman Stefan De Keersmaecker said on Thursday.

One diplomat told AFP that “not all member states are in agreement” on taking the company to court, stressing that their aim was simply to have AstraZeneca deliver the doses it had promised in its contract.

Public confidence in the AstraZeneca jab has taken a blow after the European Medicines Agency, the bloc’s regulator, said it was likely linked to a very rare form of blood clot affecting the brain.

The EMA and the commission have not changed their stance on a general use of AstraZeneca, saying its benefits outweigh the risks, but several EU countries have restricted its use to older citizens.

The EU, however, is now increasingly relying on the BioNTech/Pfizer vaccine for its rollout, which has been accelerating since the end of March.

On Thursday, four German states announced that the would roll-out the use of AstraZeneca for all adults who wanted a jab, as long as they consulted with a doctor first.