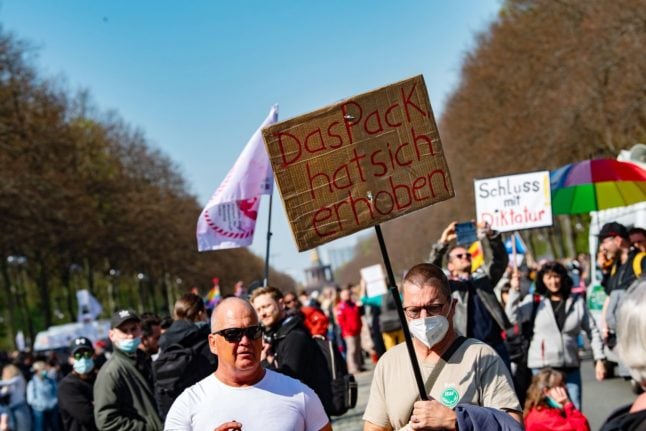 Demonstrators carry a poster that says 'the pack has risen'. Photo: DPA

Around 8,000 demonstrators – some not wearing masks – gathered near Berlin’s famous Brandenburg Gate, while the Bundestag debated the infection Protection Act,

The new law, which is being voted on by the Bundestag on Wednesday, gives the national government power to impose lockdown measures on areas with high coronavirus infection rates to slow the third wave of the pandemic.

The rules include curfews between 10pm and 5am, limits on private gatherings and on shop openings. Under the draft plans, schools will close and return to online teaching if the virus incidence rises above 165 cases per 100,000 residents in seven days.

Around 2,200 officers were at the scene, while the Reichstag building and Brandenburg Gate were cordoned off.

A police spokesperson said that water cannons were ready and could be used “if necessary”.

Police used a water canon on anti-Covid measure protesters in November 2020 to disperse crowds – the majority of whom were not wearing protective masks. The demos were held while the Bundestag reformed Germany’s coronavirus laws.

IN PICTURES: Here’s what happened at the anti-coronavirus measures rally in Berlin

On Wednesday, police officers with dogs stood near the demonstrators, while officers on horseback could also be seen. Task forces from Brandenburg, North Rhine-Westphalia, Bremen, Saxony and the federal police are supporting Berlin police.

Protesters chanted: “Peace, freedom, no dictatorship” while some made noise with whistles and drums. One poster read: “End scaremongering now”.

Police repeatedly called through a loudspeaker for protesters to comply with the coronavirus hygiene rules like wearing a mask and keeping distance.

Some people were detained for not following the rules, police said. Police wrestling with a demonstrator on Wednesday. Photo: DPA

Why are people demonstrating?

A mix of people have been protesting against tougher coronavirus measures in Germany over the past year. They include far-right groups, conspiracy theorists, so-called anti-vaxxers (those who are against vaccinations) and people who do not want restrictions on their freedom.

demonstrators just in front of brandenburger tor, shaking the fences and occasionally throwing stuff at police. attempts to break through. police using pepper spray to keep them back #b2104 pic.twitter.com/k0AZpFilNh

There are also some militant activists who have compared government measures to the Enabling Act of 1933 which gave Nazi leader Adolf Hitler’s government dictatorial powers.

Protests against the new law have been held in previous weeks across the country.

Several demos against the new law changes were registered around the Berlin government quarter on Wednesday.

According to police, from 10am onwards, a demo was registered at Brandenburg Gate for 1,000 participants and one on the nearby Straße des 17. Juni.

In addition, a demonstration with 1,000 participants was announced for the afternoon, which is planned to start near Bellevue Palace. Several smaller rallies are also planned.

Four gatherings have been banned by the authorities. One demonstration, originally planned to take place near the Reichstag embankment with 2,000 participants, was banned, the police spokeswoman added. She did not give a reason for the ban.