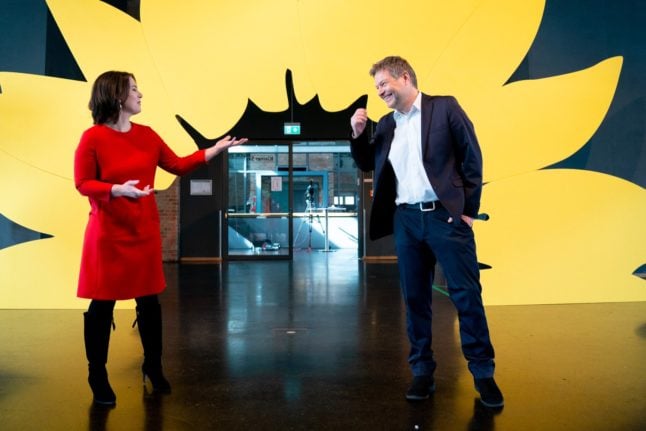 In sharp contrast to a bruising power struggle that has sent Merkel’s CDU-CSU alliance to the brink of implosion, the Greens have shown strict discipline in preventing any damaging infighting from spilling out into the public ahead of the carefully choreographed nomination.

The ecologist party has also quietly benefited from a firm line seeking tougher measures to curb coronavirus transmission, while public frustration mounts against Merkel’s right-left coalition over the pandemic.

Both have said they are ready to lead their party into elections, but have also stressed they want a consensus on the decision.

Monday’s announcement also marks the first time the ecologists are naming a chancellor candidate, in a clear sign that they are now no longer content with settling for a kingmaker role.

Surveys show them just a touch behind Merkel’s conservatives – in disarray as the veteran chancellor prepares to bow out after 16 years in power.

The Greens’ environmentalist platform also dovetails with the priorities of many younger Germans, who rattled the political establishment with school strikes for climate protection until the pandemic put such gatherings on ice.

‘Won’t be fobbed off’

With a reputation as someone who knows her brief inside out and with strong ties to the grassroots, Baerbock has stepped out of the shadows to run neck-and-neck with Habeck in popularity rankings.

Observers have described her as someone “who won’t be fobbed off” when drilling into complex issues, in an echo of Merkel’s methodical and science-based approach to policy.

Critics charge that the young mother of two has never been in government, raising doubts about her preparation for the election battle and the likely coalition haggling afterwards.

The sharp-witted former journalist has countered that “three years as party leader, being a lawmaker and mother of young children tend to toughen you up”.

The Greens’ focus on gender equality also plays in her favour as barring her nomination, the field of chancellor hopefuls would be crowded with mainly older men.

“It would also be an indictment of the Greens if a woman were to give way to a man just as the chancellery is within reach,” noted news weekly Der Spiegel.

Yet Habeck is not quite the typical alpha male of old who dominated German politics pre-Merkel.

Unabashed to admit he cries when watching sad movies, the charismatic writer with the permanent three-day stubble is popular beyond his own party.

Habeck walked into a local political gathering seeking cycling lanes in 2002, and ended up as district board leader.

By 2012, he was the environment minister for his native Schleswig-Holstein state. Despite his political experience, he is not immune to faux pas.

In 2019, a social media storm erupted after Habeck said he wanted to turn the eastern German state of Thuringia into a “democratic” region. He ended up quitting Twitter and Facebook.

He was also left red-faced live on television after fumbling over how commuter allowances worked.

Yet Habeck has been praised for his ability to chart out an overarching vision while also connecting with voters.

“Habeck is a fisher of men,” said public broadcaster BR, noting that he “reaches out to people who are not immediately expected to vote Green – fishermen, farmers, bosses of industry and soldiers. He has opened up the Greens.”

The silence from the party’s heavyweights on who they favour has been notable – senior Greens state premier Winfried Kretschmann got into hot water when his public support for Habeck in late 2019 led to a backlash.

“The party is expected to support any decision with great unity,” the Süddeutsche newspaper predicted.