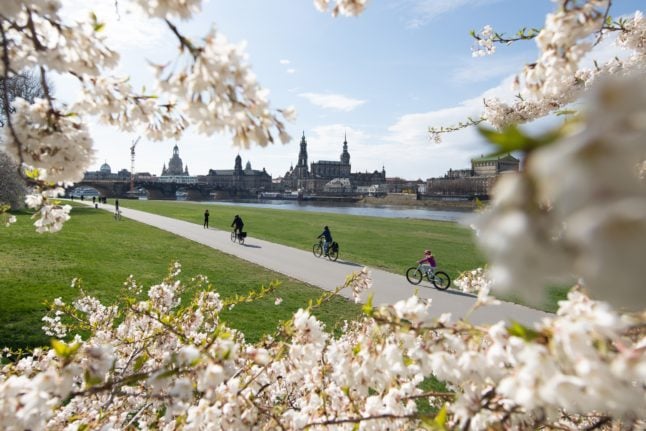 Even amid the pandemic, cyclists make the best of spring in Dresden on Sunday. Photo: DPA

For the first time in four years, Switzerland has lost its spot as the number one country in the US News and World Report Best Countries. Falling to number four, it left room for a big shakeup in the top three spots.

And, for the first time ever, Canada took first place, closely followed by Japan and then Germany. All three countries jumped up  one place from last year’s ranking.

According to US News, this dramatic shift reflects a world changed by Covid-19.

This year more than 17,000 people from 36 different countries participated in the digital survey. They were asked to rank 78 countries according to different qualities, including things like “heritage”, “power” and “quality of life”.

Though entrepreneurship is Germany’s highest-scoring category, Japan has swooped into first place this year.

Entrepreneurship is measured using 11 different subcategories. For example, the German population is seen as highly educated, and deeply connected to the rest of the world.

However, in categories like innovation and access to capital, the country is seen as lagging behind Japan. The general impression seems to be that running a German business is very productive – but starting a business is not.

This is also reflected in the Best Countries ‘Open for Business’ category, which measures the ease of founding and operating a business, where Germany only ranks 18th.

Best Countries’ new category measures how well countries “adapt and respond to whatever obstacles they face,” according to the report.

The category was created in response to an eventful year. From the pandemic to BLM protests, and increasing concerns over social justice and climate change, U.S. News sees governments under mounting pressure to act.

That’s why they’ve decided to make agility the most important category this year, accounting for over 14 percent of the overall ranking.

Germany comes in at 4th place for this category.

It scored a whopping 100 points for the sub-category responsiveness, probably thanks to the quick actions taken at the start of the pandemic in 2020. It’s also seen as particularly progressive and modern, according to the ranking.

As in previous years Germany’s lowest scores are in ‘adventure’. This category asks how attractive the country is for tourists, and the answer is: not very.

Just as in 2020, Brazil, Italy and Spain are considered the most glamorous travel destinations.

Meanwhile Germany scores a miserly 12 points out of a hundred in the subcategory “fun”, and worse than this: just one lonely point for the category “sexy”.

While it’s not the go-to destination for holiday-makers, it’s an all the more attractive destination for diplomacy. The perception of Germany is of a powerful nation with blooming international alliances.

It’s also considered a global leader, both politically and economically influential around the world.

Overall, it comes in at number four in the power category, closely following Russia, China and the US.

US News organises the annual Best Countries ranking in partnership with BAV Group, VMLY&R and the Wharton School of the University of Pennsylvania.