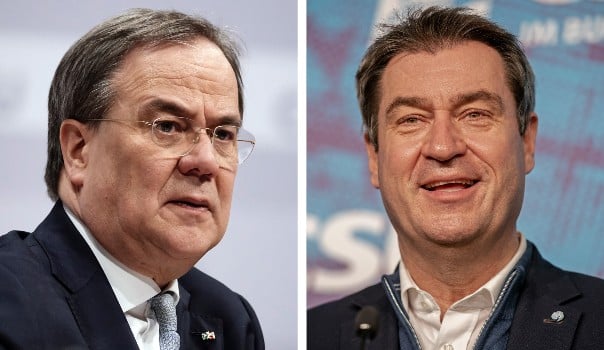 Long-time Merkel ally Armin Laschet, 60, took over as leader of the chancellor’s CDU party in January, and would normally be first choice to lead the CDU and its Bavarian affiliate CSU into the elections on September 26.

Yet as the conservatives’ poll ratings plummet over their recent handling of the coronavirus crisis, some are calling for Laschet to step aside in favour of the more charismatic CSU leader Markus Soeder, 54.

After several rounds of shadow boxing on talk shows and in the press, the two men will have the chance to stake their claims when they each deliver a speech to conservative lawmakers on Sunday.

Though neither Laschet nor Soeder has officially announced their candidacy, Bild newspaper declared Sunday’s meeting “the weekend of truth” in the race to succeed Merkel.

While a final choice of candidate is not expected immediately, conservative parliamentary leader Ralph Brinkhaus called Friday for a decision to be made “in the next two weeks.”

The ultimate decision will most likely be made behind closed doors, with Laschet telling broadcaster ZDF that the conservatives would pick the candidate who “best suited our election programme”.

Yet in an interview with Spiegel magazine on Wednesday, Soeder insisted that the candidate needed to be “accepted by the whole population, not just the party”.

The Star Trek fan and fancy-dress loving Bavarian consistently beats Laschet in popularity polls, with a recent survey by public broadcaster ARD showing that 54 percent of Germans thought Soeder would be a good candidate, compared to just 19 percent for Laschet.

As leaders of Germany’s biggest federal states by population and area respectively, North-Rhine Westphalia premier Laschet and Bavarian chief Soeder have also exchanged blows over their leadership in the pandemic.

Laschet’s reputation as the reliable continuity candidate took a hit at the end of March, when Merkel criticised his state’s slowness to reimpose restrictions despite rising infection rates.

Soeder jumped on the opportunity, praising Merkel’s handling of the pandemic and arguing that the Chancellor should help decide who would be her successor.

“A CDU/CSU candidate without the support of Angela Merkel will not be successful,” he told Bild last weekend.

Trust in the CDU/CSU has been severely hit in recent months by a sluggish vaccination programme and a corruption scandal over mask procurement, leaving the conservatives at record lows of less than 30 percent.

The once fringe Green Party now just a few points behind them, the CDU/CSU could face the real prospect of losing the chancellery for the first time since 2005.

With huge support among progressive, urban voters, the Greens’ emergence ahead of the social democratic SPD put the CDU and CSU in a “different situation”, Soeder told Spiegel.

“We need to offer people a modern idea of society alongside competent and sensible governance. We need to be solid and sexy at the same time,” he said.

READ MORE: These are the men vying to run for the Chancellery in Merkel’s party