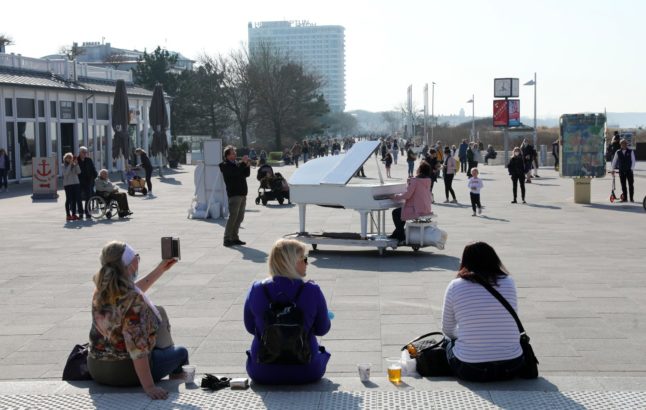 There’s no doubt that the past year has been tough for everyone.

In Germany we’ve had several measures including a tough nationwide lockdown, regional curfews, bans on drinking alcohol in public – and now we’re approaching the sixth month of a drawn-out shutdown that has left residents weary.

Bans and strong warnings against both domestic and international travel have hit foreign residents especially hard as many of us have been unable to see our friends and loved ones.

But in among the worry, boredom, loneliness and financial hardship there have been some positive sides to the last year.

From exploring the local area and learning German, to the safety net system of support for those with financial difficulties, here are the good things The Local Germany readers have found during the pandemic.

READ ALSO: ‘We’re all living the same disaster’: How foreign residents are getting through the German lockdown winter

Embracing German life and being in one place

Having time to do German lessons, chat to locals or get used to the culture are big positives to come out of the pandemic, our readers told us.

San Francisco native Rob Ruetsch, 47, who lives in Berlin said: “People no longer think I’m a tourist when they hear my accent and speak to me more in German. My casual German has improved significantly.”

“Home office, work and life balance slightly improved,” said Elena Fedulova, 34, who’s from Moscow and lives in Düsseldorf. She also said she had time to learn German in her free time.

Many people said they’ve appreciated having more time at home.

Cara Schaefer, 33, in Frankfurt and originally from the UK, said: “I’ve been able to spend more time with my husband as we are both working from home.”

Sid Shukla in Berlin said: “I was a frequent flyer (flying every other week) and considered that essential to my lifestyle. Over the pandemic, I’ve learned that it isn’t as important to me as I used to think before the pandemic.”

Scott Winnard, 31, who lives in Düsseldorf and hails from New Zealand, said the pandemic allowed him to take time “to explore the German outdoors” rather than abroad and was able to settle down and ‘be’ in my own neighbourhood and town”.

Two positives to come out of the pandemic for Noelle Ali, 33, are “compassion and solidarity”. Morgan Dolan, 30, from the US, said: “The things that have been the most positive for us are things that separate Germany and German society from other countries in the world.

“We were able to enroll our son in affordable daycare. Get all of his regularly scheduled shots. Walk the Alster (in Hamburg). People wore masks without having meltdowns in public places. People were respectful and maintained distance.”

Readers told us that the German government and states’ measures to support people were very positive.

Dolan in Hamburg added: “Though we couldn’t take advantage of it, I appreciate the measures the government took to open up sick days for parents when day cares had to close. I feel people haven’t suffered here the way they have truly suffered in other places.

“It’s boring and we haven’t left our neighborhood in a long time. But I don’t feel forgotten. In exchange for the lack of gross community suffering that we have seen this last year, I am willing to wait for the vaccine rollout.”

Job market stability was a positive for Yazmin Gutierrrez, 38, in Solingen, North Rhine-Westphalia and who is from Mexico.

“I am fully employed and my income was not affected,” she said. “My husband’s company struggled a lot but even during the months he was in Kurzarbeit (reduced working hours) we were not very affected financially. He even got a better job and I had several interviews in the meantime.”

German management of the pandemic

While there has been plenty of justified criticism of many aspects of the German response – particularly the slow vaccine rollout – many Local readers found that the dual perspective of being a foreign national in Germany gave them greater appreciation for the German system.

Noa Freilich Pollack, 38, who lives in Göttingen said: “It has been very stable here, at least until November if I compare it to my homeland, Israel. Especially when it comes to education. I’m very grateful we are here. Also the lockdowns did enable us to visit nature and that proved to be a source of strength.”

Daniela Sánchez, 32, who lives in Munich and comes from Mexico said: “We are in heaven compared with other places. There are so many people that are truly struggling: not having a job and not being supported by any means by their governments, not having enough space or the opportunity to go outside, not having the opportunity of home office, being constrained with health insurance, and so many more examples.”

Rebecca Turner, 31, who’s based in Berlin and from New Zealand is thankful to be in the Bundesrepublik. “I am so grateful to be in Germany during the pandemic. I am much better off in terms of financial and housing security here than I would have been at home.

“Also, being on half-time working hours means I’ve had time to take German classes online in the morning a few months last year, then work from home in the afternoon. I’ve now completed A2!”

Cristina Iliescu, 35, in Frankfurt and originally from Romania said it’s important to remember that Germany has not yet experienced a severe lockdown like some other countries have during the pandemic.

“For us, in Germany, the lockdown last year meant that you were still free to go outside and spend time in the sun, indeed, only with another person from a different household – but still free.”

Flavia Spielkamp, 38, said: “I come from Brazil so the situation here is better then there. We can walk outside, we have help from the government when it comes to money situations, so I guess try to see the glass half full.”

With most facilities shut, we’ve had to embrace being outside in nature a lot more often. Lots of readers told us how much they’ve enjoyed getting out and about – even if they can’t go far.

Jose Alonso, 29, in Erding, Bavaria, said he has “discovered the camper life, outdoor swimming, windsurfing” during the past year. “Since the lockdown in Germany, I’ve appreciated being outdoors and seeing cities in a new light, without crowds. I’ve also become closer to our neighbours,” said Judy Rae Merhar, 47, in Wiesbaden and originally from Texas.

Pete MacMorrogh, 67, in Frankfurt recommended the Komoot app. “It’s like being guided around by someone who knows their way, especially good for walks,” he said. “Discovered many wonderful tours.”

“Having to record the miles kicked me on to do more than seven miles/11km per day . Fitter, healthier and lost weight and a great cure for Lockdown blues,” he said.

Tips for getting through the third wave

Ritta Albrecht, 43, in Kiel and from Indonesia, said it’s time to get “creative” when it comes to communication with friends and family.

“Staying home and not being able to go to holiday is not the end of the world,” she added. “For me as a home person, I have been enjoying staying at home and doing all my hobbies. Thinking about other people is the most important thing at this moment.”

Dolan in Hamburg said it’s important to have perspective. “Sure these measures are inconvenient and annoying and disruptive but here there is unemployment payments,” he said. “There is healthcare and it hasn’t collapsed. So much still works here that doesn’t work other places. The country and states haven’t left us to fend for ourselves.”

“This too shall pass, said Shaeffer in Frankfurt, while Shukla in Berlin said: “We shall persevere, together! Hang on tight.”

Alonso in Erding said: “Embrace outdoors as the new normality. Move around locally as much as you can (with common sense).”

Turner in Berlin’s advice is “to remember that everyone is a bit over it at the moment and it’s OK to feel like that. It will be over eventually.”

“Just get out and walk. There are plenty of places to explore and enjoy,” said Allison Mcclean, 47, in Hamburg and who’s originally from Ireland.

Prasath B., 37, in Frankfurt who’s from India, said: “Stay strong, stay away from people (even if it means not meeting loved ones) to save the lives of others.”